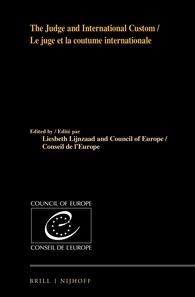 The Judge and International Custom

International custom remains one of the most important sources of international law despite the codification of the law and the numerous international agreements concluded between the different actors of the international community However, uncertainties still remain in relation to several of its aspects, including its formation, evidence and the relationship between its two constituent elements, that is, State practice and opinion juris. This presents challenges to national and international judges when called upon to identify and apply the rules of customary international law. With a view to addressing these grey areas, the Council of Europe ad hoc Committee of Legal Advisers on Public International Law (CAHDI) in cooperation with the Ministry of Foreign Affairs of France organised a conference on “The Judge and International Custom” where important contributions were made by international and national judges clarifying some aspects of this topical issue. This volume contains these contributions, supplemented with articles commissioned by the CAHDI from some of the highest judges at international and national level. The collection highlights the valuable contribution made by the CAHDI to the development of public international law and in particular to the work of the International Law Commission and the Sixth Committee of the United Nations General Assembly by participating proactively in the legal debate to establish a well-defined international legal framework for this topical issue. 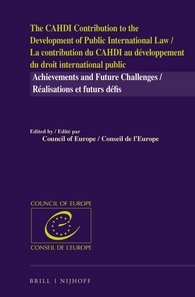 The CAHDI Contribution to the Development of Public International Law: Achievements and Future Challenges

In a political climate which encourages interdependece between States, international law is steadily developing and increasingly becoming a key factor in the orgaisation of inter-State relations. This concept of interdependence implies a strong commitment by all States to international law and a shared responsibility for its application. Through the ad hoc Committee of Legal Advisers on Public International Law (CAHDI), the Council of Europe contributes to the implementation of public internaitonal law and further acts as a catalyst for its development of public internaitonal law, functioning notably as The European Observatory of Reservations to International Treaties, a unique and flagship function aknowledged today by other regional organisations. The CAHDI also acts as a laboratory and a catalyst for new ideas.

This volume, containing tought-provoking essays by former and current Legal Advisers from a wide selection of Council of Europe countries, arose from the conference celebrating the 50th anniversary of the CAHDI meetings and showcases CAHDI's pioneering work.

Find our more about this book 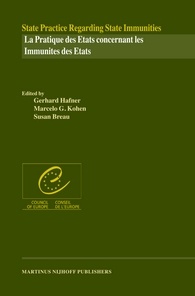 This book is the result of the Council of Europe Pilot Project on State Practice regarding State Immunities carried out under the auspices of the Committee of Legal Advisers on Public International Law (CAHDI) since 2002. It presents and analyses the material submitted by 27 Member States and one Observer State of the Council of Europe, including decisions of national courts, relevant legislation and other documents.

The analytical report was undertaken by the Department of European, International and Comparative Law of the University of Vienna, the British Institute of International and Comparative Law and the Graduate Institute of International Studies, Geneva. It compares State practice with the relevant articles of the UN Convention, the European Convention on State Immunity and the draft articles prepared by academic institutions. It is the first in-depth analysis of European State practice in the field of State immunity. Such a broad analysis is essential, in particular for the ascertainment of customary international law. 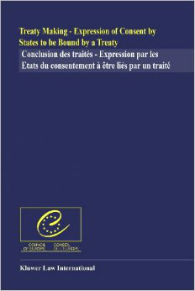 Expression of Consent by States to be Bound by a Treaty

Treaty-making constitutes the very basis of the international legal order and influences international relations. It channels the expression by States of consent to be bound and defines the commitments they enter into. However, the national procedures by which States express their consent to be bound vary considerably, depending on constitutional, legal and political conditions which reflect the history of each country.

The report, drawn up under the aegis of the Committee of Legal Advisers on Public International Law (CAHDI) of the Council of Europe, encompasses the practice of thirty-nine member States of this Organisation and a number of observer States. It provides comprehensive and up-to-date information about these States' means of expressing consent to be bound by a treaty. Furthermore, the analysis commissioned by the CAHDI from the British Institute of International and Comparative Law casts fresh light on this matter by inferring interesting considerations from the diversity of national procedures.

The impact of the European convention on Human rights is not limited to general international law, it is also important on such diverse areas as the principles of state responsibility, the interpretation of treaties, and environment protection.

With this report the CAHDI contributed to the celebrations of the 50th anniversary of the European Convention of Human Rights. 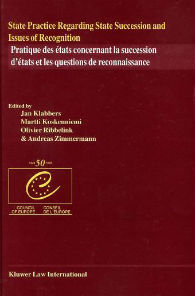 State Practice Regarding State Succession and Issues of Recognition

The Pilot Project on State Practice regarding State Succession and Issues of Recognition carried out under the aegis of the Committee of Legal Advisers on Public International Law (CAHDI) encompasses the practice of sixteen member States of the Council of Europe and provides significant information about these States' position vis-à-vis the new European architecture following the developments of 1989.

On the basis of the information gathered, the CAHDI decided on the preparation of a report by the Max Planck Institute for Comparative Public Law and International Law, the T.M.C. Asser Institute and the Erik Castrén Institute of International Law and Human Rights.

Find our more about this book