History of the CAHDI

Role of the CAHDI

In a political climate which encourages interdependence between states, international law is constantly developing, and is increasingly becoming a key factor in the organisation of inter-state relations. The Council of Europe is accordingly working to co-ordinate its member States' activities in this field, through the work of the Committee of Legal Advisers on Public International Law (CAHDI).

The CAHDI is the only truly pan-European forum where legal advisers of the Ministers for foreign affairs of the member States of the Council of Europe and a significant number of observer States and Organisations can exchange and possibly co-ordinate their views regarding major issues of public international law.

The CAHDI meets twice a year to exchange ideas, discuss various issues of public international law and issue opinions at the request of the Committee of Ministers.

The CAHDI's various activities have led to the publication of studies and reports and the adoption of recommendations by the Committee of Ministers.  The issues examined have included, for instance: 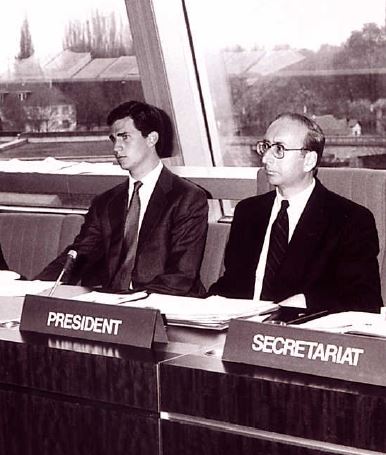 Picture of Mr Türk, Chair of the CAHDI in 1991, together with the former Prince Felipe de Borbón, the current King of Spain, Felipe VI.

Current work of the CAHDI

The CAHDI is currently studying various other issues, including:

Subordinate committees of the CAHDI

The CAHDI can create subordinate committees responsible for performing certain specific tasks.  In this connection, three committees have been set up for limited periods to work both on state practice in the field of public international law and on reservations to international treaties.

DI-S-RIT – Group of Specialists on Reservations to International Treaties

This group of independent specialists had the task of considering the possible role of the CAHDI as a European Observatory of reservations to international treaties.
It operated in 1998 and held two meetings (Paris, 26-27 February 1998 and 14-16 September 1998) before being replaced by the DI-E-RIT.

DI-E-RIT – Group of Experts on Reservations to International Treaties