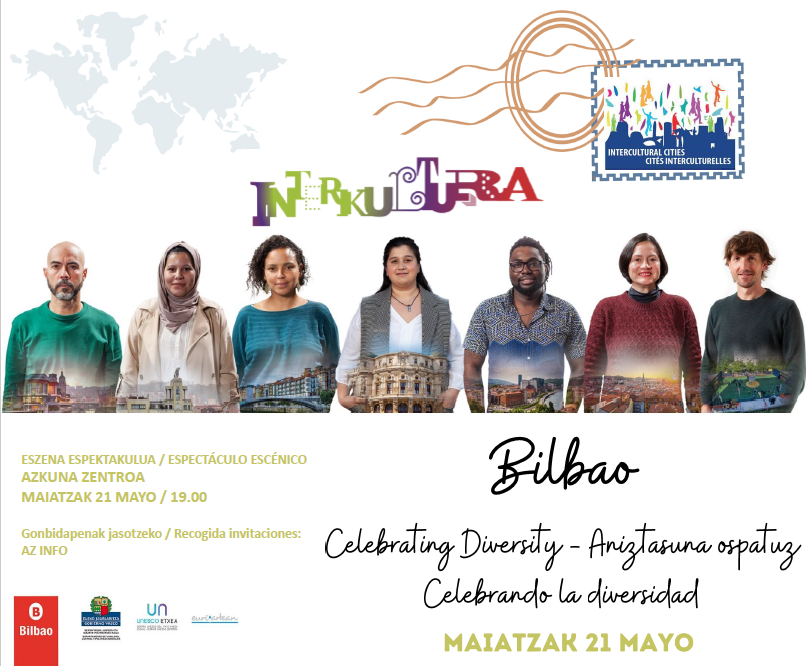 The city of Bilbao is made up of a diverse population that includes people of different nationalities, origins, cultures, languages, religions/beliefs and worldviews. International human mobility is undoubtedly an amplifying element of this diversity (migrants, refugees and asylum seekers...), but not the only one, as there was already a rich and remarkable internal cultural diversity.

Bilbao City Council has among its objectives the promotion of an intercultural city, a cohesive and egalitarian project that fights discrimination and promotes positive interaction between neighbours of different origins and cultures.

This project requires much more than the sole action of the public authorities and public administrations present in the territory.

It is essential to recognise differences and encourage the diversity of resources of each neighbour to be articulated, interact and contribute to the social, economic and cultural development of the city. The intercultural city needs to share objectives and methodologies with organisations from the social, cultural, sporting, business and trade union spheres... which have often been pioneers of intercultural initiatives and approaches in their ways of working and influencing.

On World Day for Cultural Diversity for Dialogue and Development, Bilbao City Council wishes to share on this Council of Europe platform three experiences that speak to us of the advantage of cultural diversity from the voices and actions of diverse agents:

INTERKULTURATE is a stage show that combines dance, percussion and music, puppets and testimonies of migrations and cultural diversity. It has been developed by the theatre company EURI ARTEAN and UNESCO ETXEA, with the support of the Bilbao City Council and will be presented publicly on 21 May 2021 at Azkuna Zentroa. The cast is made up of women and men with diverse cultural backgrounds and origins, who enter into dialogue both through words and artistic manifestations in order to move through the 3 principles of Interculturality.

This video is the result of a collective creation process with the women who participated in the 1st edition of the Recognition of Migrant Women in Bilbao, WOMEN LIFE-WOMEN DIVERSITY (2019).

The initiative arose from the Local Immigration Council of Bilbao and aims to recognise the importance of immigrant women in the economic and social life of the city, as well as to generate scenarios for the recognition of diversity.

KOOP SF 34 is a co-working space that emerged in 2015 in the heart of the San Francisco neighbourhood in Bilbao, promoted by people of sub-Saharan origin. It was born with the objective to combat the high unemployment rate suffered by this group, and it does so based on building on strengths rather than weaknesses, creating programs where knowledge and skills are enhanced in spaces of high cultural diversity.

Sport, art and culture, gastronomy and sustainable consumption are some of the many tools used by the collective to promote inclusion and interaction between autoctonous people and people with migrant background.

URBAN GARDEN in the roof