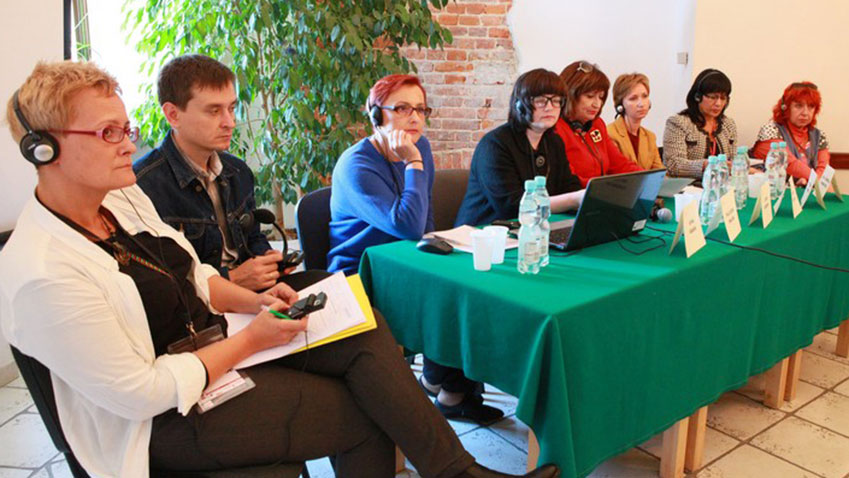 The "Intercultural Cities" panel was held within the framework of the Eastern Europe Initiatives Congress in Lublin, Poland, on 2 October 2015. The meeting gathered together the representatives of Polish and Ukrainian cities, civil society ortanizations, public officers, enterpreneurs, and experts from the Council of Europe.

Given the recent influx of refugees to Europe, integration has become an issue of concern both for governments and ordinary citizens. In case of Poland, it is still not quite clear what the role of Polish municipalities in this process is. The country is currently developing its integration policy. In December, 2014, the Action Plan for migration was established by the government delegating a number of tasks to the local administrations, yet, with no specification of how and to what extent the cities could get involved.

With increased number of foreigners choosing Poland as their country of residence, it is obviously at the local level where coherent and stable integration policies are most needed. The city of Lublin has started the process of defining its role in building a peacefully coexisting community. Being a part of Intercultural Cities (ICC) Programme of the Council of Europe, the city benefits from the experience and resources provided by the European network. Moreover, since most of integration activities are being held in Lublin for the first time, the city continuously seeks to team up with other municipalities in order to share experiences and develop practical solutions to the existing integration issues. National network of intercultural cities (ICC-UA) in the neighboring country Ukraine represents a group of such municipalities, as the cities in Ukraine are facing similar kind of issues. Many of them are receiving large numbers of refugees from the south-eastern part of the country (military conflict zone) being barely prepared to deal with this kind of phenomenon. Such cities as Melitopol, Lutsk, Pavlograd, Priluki, Vynnytsa, and Sumy realize unquestionably the growing need for intercultural integration work in Ukraine and have already launched a number of local integration strategies to overcome arising challenges.[1]

In this light, "Intercultural Cities" panel was organized in the context of the Eastern Europe Initiatives Congress 2015 in Lublin in order to provide an opportunity for Ukrainian and Polish cities to:

Presentation of the ICC Programme was made by Phil Wood and Kseniya Khovanova-Rubicondo focusing on the idea of interculturality, on analytical and practical tools provided by the Programme, its working principles and sructure. During the discussion of "Immigration issues faced by Polish and Ukrainian cities today” moderated by Anna Szadkowska-Ciężka and Kseniya Rubicondo, city representatives shared their experiences, good practices, lessons learned and expressed their aspirations for the future of the intercultural integration in their communities. Polish municipalities were represented by Danuta Czechmanowska (Kraków) and Piotr Choroś (Lublin). Olena Shulika (Pawlograd), Lyudmila Afanasieva and Olena Dubinina (Melitopol), Tetiana Hnativ (Lutsk), Viktoria Patiutko (Sumy) and Irina Ivasiuk (Vynnytsa) represented Ukrainian cities.

A clear difference was observed between the experiences of Ukrainian and Polish municipalities: when the former struggle with a very basic problems of providing food and shelter for internal refugees, the latter face the resistance of the national and local governments to administer integration. The importance of the national network for dealing with a variety of refugee integration issues was underlined by the Ukrainian speakers.

During the workshop on intercultural strategy development conducted by Daniel de Torres, an opportunity was presented for the cities to express common concerns and ask practical questions about integration. This part of the meeting demonstrated once again how important it is for the municipalities to share their experiences, discuss challenges, review best practices and lessons learned. This in itself, they concluded, is a proof of benefits provided by ICC network membership (national or European).

The Intercultural Cities panel presented a real opportunity for the participating cities to work on the existing in their communities integration issues together, to look at their current situations through the 'intercultural lens', to share experiences and identify applicable approaches to address the existing challenges. As a result of the panel, Ukrainian cities assured to continue their ICC engagement and active implementation of urban models of intercultural integration in their communities with the support of knowledgeable experts and using other available network resources. Representatives of Polish municipalities settled to pursue intercultural integration work trying to overcome administrative bariers while remaining in contact with Lublin on this matter, as the only Polish member of the ICC network. The benefits of ICC network membership were perceived as obvious by all cities-participants and they all agreed that the future cooperation between intercultural cities and networks in two neighboring countries would be an advantage.

[1] It is noteworthy that, due to Lublin's geographical position (eastern Poland), cooperation with Ukraine is one of the city's priorities. Ukrainians is the largest migrants group in Lublin, and today’s political situation creates many challenges for integration of the newcomers, who often seek a refugee status.