The Council of Europe’s Eurimages Fund has joined forces with ten co-production markets all over the world in order to award the Eurimages Co-production Development Award. A cash-prize of €20,000 for feature and animation films and €15,000 for documentaries (CPH:DOX, Copenhagen), this award has been created to promote the Fund’s role in encouraging international co-production from the initial stages of a project.

To be eligible, projects must participate in one of these markets:

and be designed from the outset as an international co-production, other than in purely financial terms, between at least two member states of the Eurimages Fund. 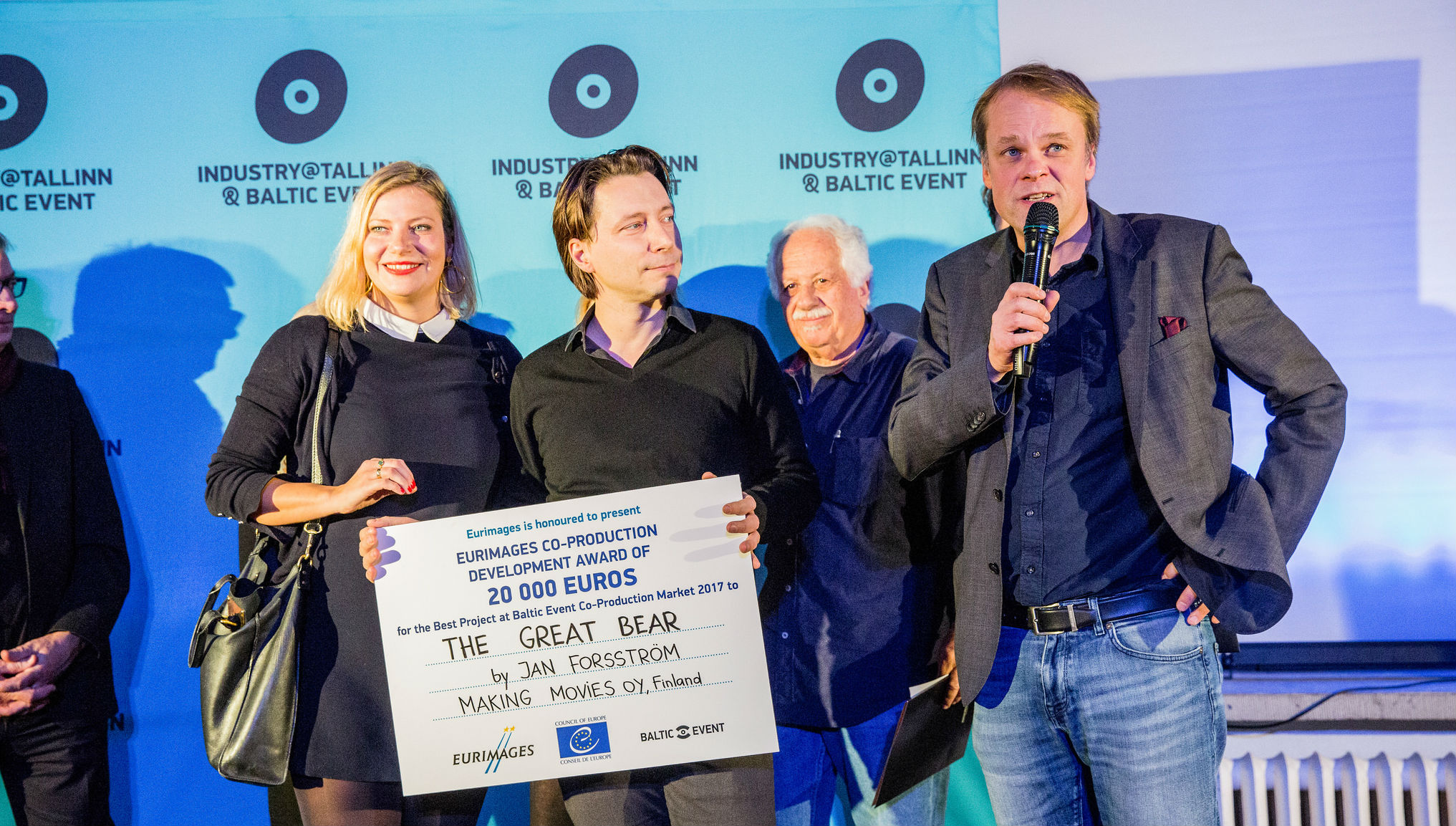 01/12/2017 – The last Eurimages Co-production Development Award was awarded last night in the framework of the Baltic Event Co-production Market (Tallinn) to the project The Great Bear (Suuri karhu) which will be directed by Jan Forrström and produced by Kaarle Aho & Kai Nordberg from the Finnish company Making Movies Oy. The Jury composed of Elena Kotova (Czech Republic representative to the Eurimages Board of Management), Katriel Schory (Israel Film Fund), Kristina Trapp (EAVE) and Meinolf Zurhorst (ZDF/ARTE) chose to “award an original and inspiring story that portrays a unique cinematic landscape and a deep understanding of the human soul”. Further information on the festival’s website. 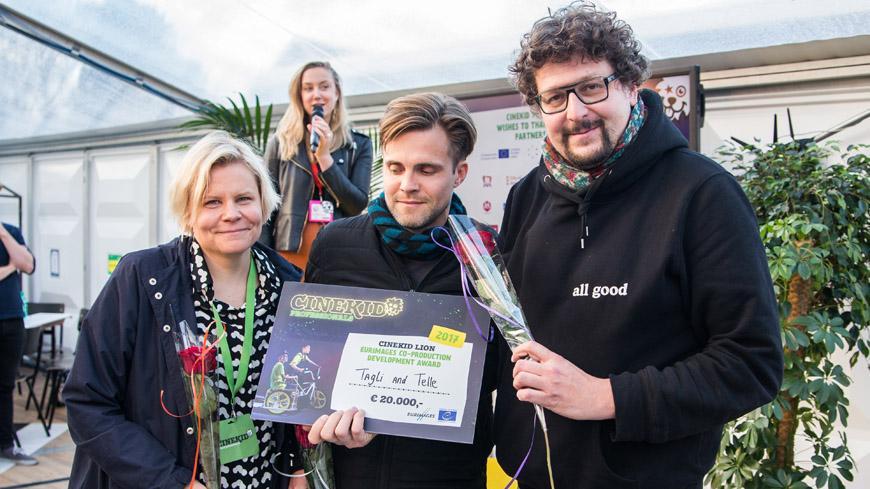 02/11/2017 - Two major prizes were handed out to projects selected for this year’s Junior Co-production Market during the closing ceremony of Cinekid for Professionals 2017 in Amsterdam: among them, the Eurimages Co-production Development Award of €20,000 went to the project Tagli and Telle written by Paula Noronen, directed by Akseli Tuomivaara and produced by the Finnish company Bufo Film. The jury was impressed with the director’s first film, which showed his ability with a young cast: this, combined with the colourful and action-packed world of Tagli and Telle gives an indication of what we can expect. More information on the festival’s website. 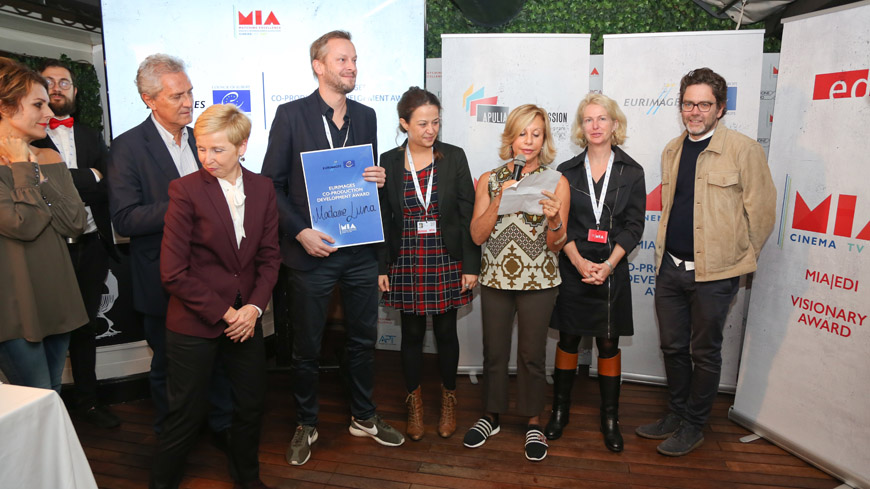 23/10/2017 - During the MIA awards ceremony which took place last night in Rome, Eurimages Jury, whose members were Conchita Airoldi, Roman Paul and Karin Schockweiler (Eurimages Luxembourgish Representative), highlighted the high quality and diversity of this year’s MIA|Cinema Co-Production Market’s projects.
The impressive selection displayed a wide variety of cultures, genres and subject matters, proving the vitality of European cinema.
Impressed by the originality of this story and by the emotional and dramatic potential of the reversal of biological mother-and-son role, the Jury decided to give special mention to Pablo by Enrico Maria Artale produced by Roberto De Paolis and Carla Altieri.
The 2017 Eurimages Co-production Development Award of 20.000 Euros went to a project that looks at the startling transformation from victim to perpetrator of a young Eritrean refugee: Madame Luna by Binyam Berhane which will be produced by David Herdies and Vicky Miha. See the press release. 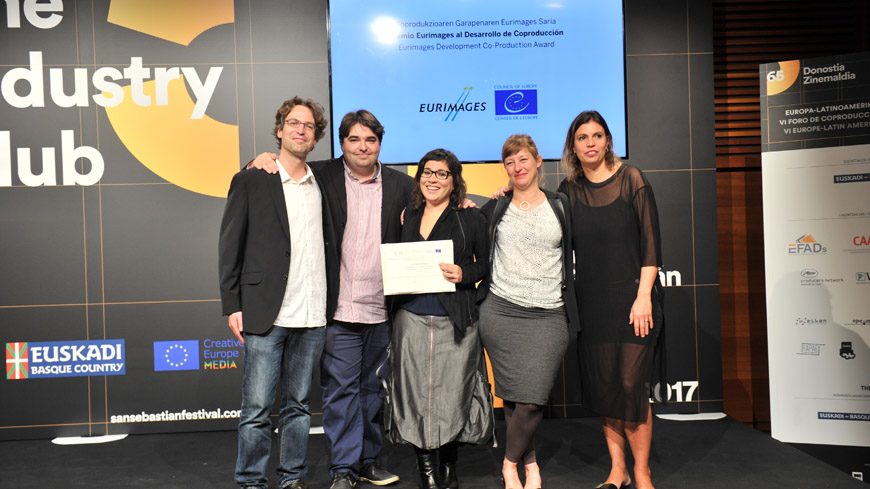 02/10/2017 - The very first Eurimages Co-production Development Award of San Sebastian was awarded last night at the close of the Europe-Latin America Co-Production Forum to the project Las Consecuencias/The Consequences which will be directed by Claudia Pinto and produced by Sin Rodeos Films (ES) in co-operation with Mexico. The Jury composed of Agustina Chiarino, Christine Eloy and Pablo Pérez de Lema (Spanish representative to the Eurimages Board of Management) chose to award this 20 000 euro prize to a project which has "a daring look at family relationships that questions our perception of truth." Moreover the Jury of the 65th San Sebastian Film Festival decided to award the Silver Shell for Best Actor to Bogdan Dumitrache for his role in Pororoca by Constantin Popescu, a Eurimages-supported co-production between Romania and France. Then the Jury Prize for Best Cinematography went to Florian Ballhaus for the film Der Hauptmann (The Captain) directed by Robert Schwentke, a co-production between Germany, France and Poland also supported by Eurimages. Last but not least and among the parallel awards, a Special Mention of the Sebastiane Award went to the Eurimages-supported film Soldiers, Story from Ferentari (RO, BE, RS) by Ivana Mladenovic. See all awards on the Festival's website. 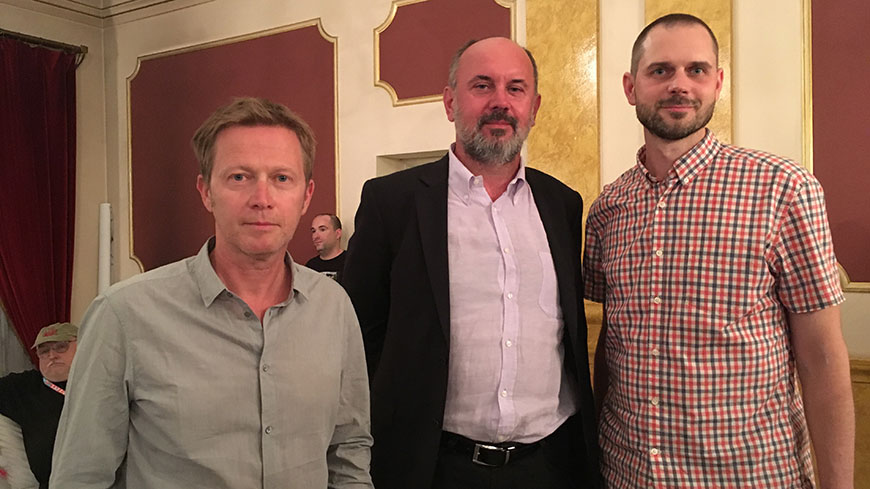 18/08/2017 - CineLink in Sarajevo : the Eurimages Co-production Development Award went to the project Half-Sister by Damjan Kozole to be produced by Danijel Hočevar from the company Vertigo in Slovenia. The jury of the CineLink Co-Production Market decided to reward the story of two estranged sisters who are, after 25 years of barely seeing each other, forced by circumstances to share an apartment. This new project is the follow-up to the film Nightlife by the same director, which was presented in Karlovy Vary in 2016. The jury also gave a Special Mention to the project The Great Tram Robbery by Slobodan Šijan, a co-production between Gargantua Films (RS), Maxima Film (HR), Studio Virc (SI), Novi Film (BH) and Chouckov Brothers (BG). All the resutls of the Industry are available on the Festival's website.

25/07/2017 - Baltic Event Co-Production Market submission is open. The Baltic Event Co-Production Market is open to full-length fiction film projects designed to be co-produced within or with Baltics, Scandinavia, Central and Eastern Europe, Georgia, Russia, and Ukraine. Past participants include 4 Months, 3 Weeks and 2 Days (Cristian Mungiu, 2007), In the Fog (Sergei Loznitsa, 2012), Under Electric Clouds (Alexey German, 2015), The Fencer (Klaus Härö, 2015), November (Rainer Sarnet, 2017) and many others. Deadline: 15 August, 2017. For additional information please contact coproduction@poff.ee. 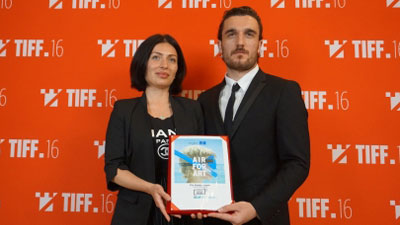 11/06/2017 – The first Eurimages Co-production Development Award of the Transilvania Pitch Stop initiative in Cluj went to the project The Empty House to be directed by Rati Tsiteladze and produced by the company Artway Film in Georgia. This industry programme which took place on 9 and 10 June 2017 during the TransilvaniaIFF had selected 11 feature film projects from 1st and 2nd time directors from Romania, Bulgaria, Serbia, Russia, Greece, Turkey and Georgia. A jury of international professionals along with a representative from Eurimages awarded three important prizes among which the new Eurimages Co-production Development Award. Moreover, several Eurimages-supported co-productions are among the winners of Transilvania IFF 2017: My Happy Family by Nana Ekvtimishvili and Simon Gross took the Transilvania Trophy and the Best Performance Award (Ia Shugliashvili) while the Best Directing Award and the Audience Award went to Heartstone by Guðmundur Arnar Guðmundsson and the Romanian Days Award for Best Feature Film was given to Scarred Hearts by Radu Jude. More information on the Festival’s website.

24/03/2017 – In the framework of its promotional activities aimed at fostering cinematographic co-productions from the initial stages of a project, the Eurimages Fund decided to create three new Co-production Development prizes of €20,000 each which will be awarded in the co-production markets of San Sebastian Film Festival, Transilvania International Film Festival and Cartoon Movie. See the press-release. 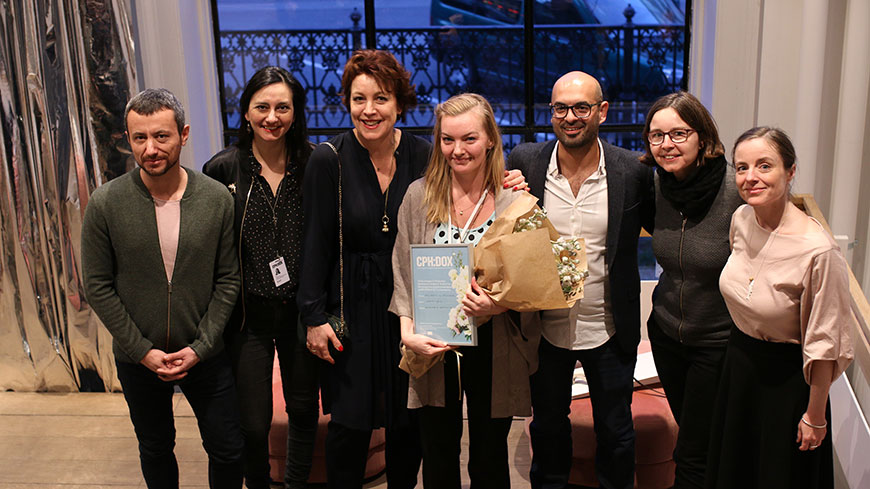 Moreover, the Eurimages Co-production Development Award for documentaries, worth 15 000 euros, went last night at the CPH:FORUM in Copenhagen to a project entitled Psychosis in Stockholm, which will be directed by the Swedish filmmaker Maria Bäck and produced by Anna-Maria Kantarius from the company Garagefilm International (SE). “The Jury was impressed by the braveness of a young filmmaker, who presented a very personal, delicate and urgent project. In this project she elaborates a strong personal suffering, that she wants to bring alive in a film, that combines documentary and fiction elements.” CPH:DOX’s international and co-production event, CPH:FORUM, has been established in order to support the development and financing of creatively and visually strong projects. This year, the event was held on 22-23 March, where the top producers and directors from the whole world took over the stage at Kunsthal Charlottenborg. The strongest project received the Eurimages Co-production Development Award which has been given by a jury composed of Dorien Van de Pas, Head of New Screen NL and Dutch representative to the Eurimages Board of Management, Francesco Giai Via, festival programmer for the Venice Film Festival and consultant for Torino Film Lab, and the Danish Oscar-nominated producer Signe Byrge Sørensen . More information on the festival’s website. 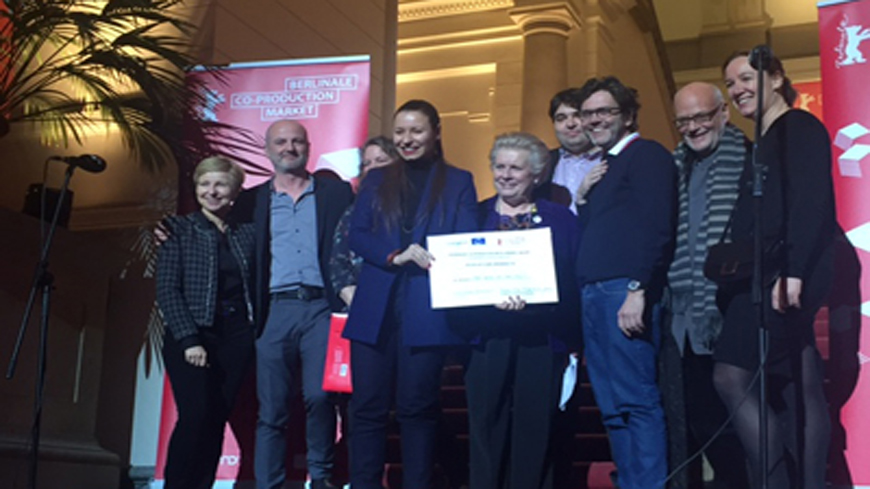 13/02/2017 – The second Eurimages Co-production Development Award of this new year was awarded last night to the project entitled The Wife of the Pilot by Anne Zohra Berrached during the Eurimages cocktail organised in co-operation with the Berlinale Co-production Market. The jury composed of the Dutch producer Leontine Petit, Manfred Schmidt (director of MDM for many years) and Pablo Pérez de Lema, Spanish representative to the Eurimages Board of Management, were impressed by the quality consistently high standard of the 14 projects which were presented to them. However, it chose to reward a project which “tells a story that is part of all of our histories, told from a completely different point of view. It will be a film that challenges audiences to look beyond what they think they know, and to leave behind their preconceptions.” See the press release. 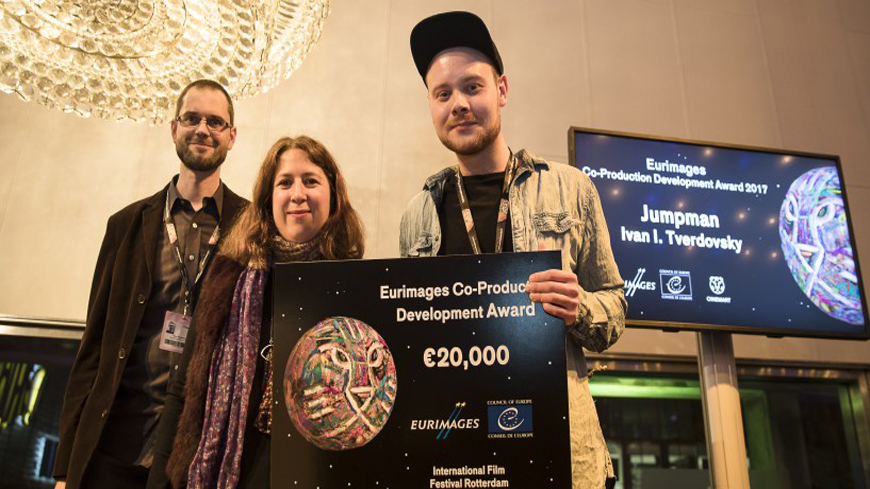 02/02/2017 – The first Eurimages Co-production Development Award of 2017, worth 20 000 euros was awarded last night in Rotterdam in the framework of the 34th CineMart Co-Production Market to the project entitled Jumpman, which will be directed by Ivan I. Tverdovsky and produced by the company New People (RU), in association with Arizona Productions (France). The Jury composed of Uldis Dimiševskis, Head of the Production and Development at the National Film Centre in Latvia and representative of Latvia to the Eurimages Board of Management, the producer Annamaria Lodato and Anton Scholten, co-founder of  one of the main Dutch companies of post-production and special effects , the company Filmmore, wanted to give the Eurimages Award to "a project that through a seemingly simple story questions our ever-growing numbness evidenced so clearly in our societies today. In doing so, this young and talented filmmaker attempts to bridge a high quality filmmaking to a wider audience while further expanding and developing his cinema language”. Further information on the Festival’s website.