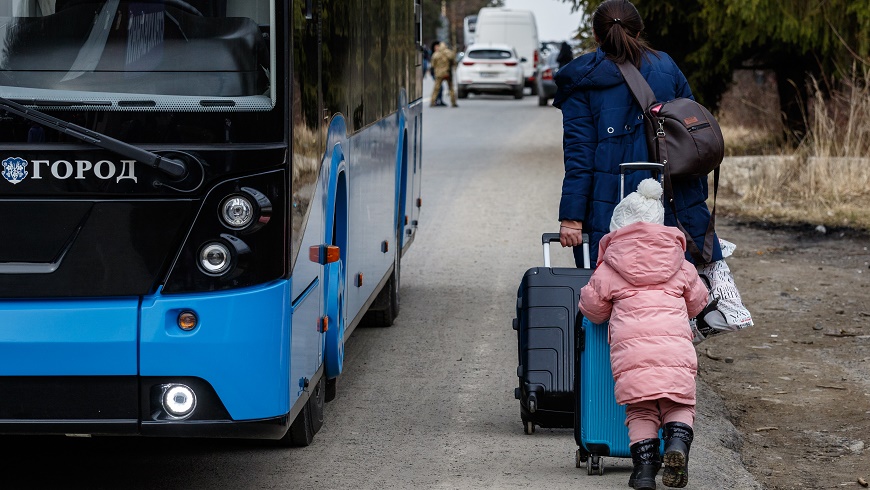 The Council of Europe’s Group of Experts on Action against Trafficking in Human Beings (GRETA) has warned of the dangers of people fleeing the armed conflict in Ukraine falling victim to human trafficking and exploitation, amid the fastest-growing refugee flow in Europe since World War Two.

Around three million people have been forced to flee Ukraine in less than three weeks, seeking refuge in neighbouring countries and onwards across Europe. An estimated 90% of them are women and children. The Council of Europe Secretary General has highlighted the vulnerability of women and girls to sexual violence as they try to escape conflict, and has pledged the Organisation’s support to Member States to take care of refugees arriving from Ukraine(*).

There has been an outpouring of support, with many people offering transport and accommodation to Ukrainian refugees. However, the unprecedented flow of people poses significant logistical challenges for both state institutions and aid organisations, in particular in countries bordering Ukraine. Front-line civil society organisations and journalists have sounded the alarm over suspected cases of human trafficking involving Ukrainian refugees. There are reports of traffickers targeting parentless children fleeing Ukraine, and many such children are currently unaccounted for, following the hasty evacuation of orphanages and foster homes. In some countries, specialised anti-trafficking NGOs are disseminating leaflets to refugees, warning them of the risks of accepting transportation and accommodation from strangers, and informing them how to seek help and report suspicious cases to the existing national helplines for trafficking victims.

Helga Gayer, President of GRETA, said: “Public officials and civil society organisations in countries receiving Ukrainian refugees must be alerted to the risks of human trafficking and exploitation. Urgent steps must be taken to strengthen coordination at border crossings and reception facilities and to ensure the accurate registration of refugees and their access to necessary documentation, residence permits and essential services.”

“People fleeing war are physically and psychologically weakened, unfamiliar with their new surroundings and highly vulnerable to falling prey to criminals. Structures receiving refugees must ensure that they are informed of their rights, in a language they can understand, and provided with psychological and material support. The authorities must take steps to prevent fraudulent offers of transportation, accommodation and work, and strengthen safety protocols for unaccompanied children, linking them to national child protection systems,” she added.

GRETA is also deeply concerned for the safety of the staff of civil society organisations working in the field of anti-trafficking in Ukraine, and the plight of the many victims of human trafficking who are being assisted by them. GRETA has already noted in its second report on Ukraine, published in 2018, the heightened vulnerability to human trafficking of the millions of internally displaced persons (IDPs) who were forced to flee their homes following the illegal annexation of the Autonomous Republic of Crimea and the City of Sevastopol in 2014 and the armed conflict in Donetsk and Luhansk regions. The difficulties already faced by these IDPs are aggravated by the current military attack by the Russian Federation, putting them at even greater risk of re-victimisation.

GRETA recalls the obligations of the 48 State Parties to the Council of Europe Convention on Action against Trafficking in Human Beings to prevent human trafficking and to identify and protect victims of trafficking. These obligations continue to apply – and have an increased relevance – in times of emergency, such as the massive arrival of refugees. The Convention recognises the importance for States Parties to enable migration to take place legally. It also requires Parties to put in place adequate identification procedures which enable the detection of victims of trafficking, including among people seeking international protection, and to enable them to exercise a series of rights to assistance, protection and compensation. GRETA’s Guidance Note on the entitlement of victims of trafficking, and persons at risk of being trafficked, to international protection is of relevance in this respect.