Information from the media is a public good! Why protecting those who create it matters 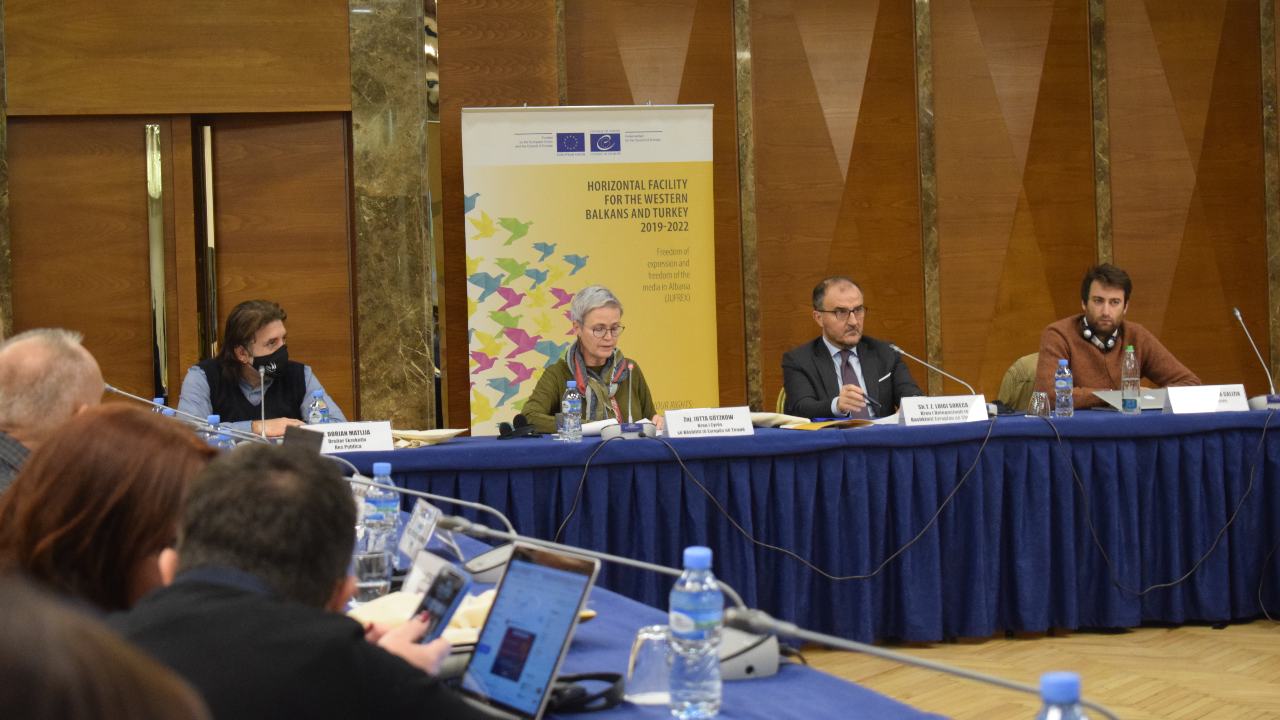 The event gathered prominent journalists, Members of the Parliament, senior representatives of the judiciary, law enforcement agencies, equality bodies and civil society to discuss key challenges concerning the protection of journalists and important safeguards for their work.

In his opening remarks, European Union Ambassador to Albania Luigi Soreca said: “Journalists must feel safe to work. Without freedom of the media, there are simply no free and democratic societies. Freedom of expression and media freedom are key benchmarks against which the European Union assesses candidate countries’ progress towards EU membership. The European Commission’s 2021 annual report on Albania has raised a number of concerns as regards freedom of expression and media freedom in the country, including verbal attacks, smear campaigns and acts of intimidation against journalists. This needs to change. There must be a policy of zero tolerance for intimidation and attacks against journalists. And a strong political and effective collaboration between the competent institutions, as well as the mobilisation of media actors and of the broader society. The EU will continue to support Albania and the Albanian media in this process.”

For her part, the Head of the Council of Europe Office, Jutta Gützkow, highlighted the importance of cooperation with the public authorities and their role to ensure a better protection for journalists. “I hope that the discussion today emphasizes the commitment of Albanian authorities to improve safeguards so that media actors and journalists work in safe environments.” said Gützkow.

Matthew Caruana Galizia, the son of the murdered Maltese journalist Daphne Caruana Galizia, stressed that media freedom is dependent on a democratic system based on the rule of law and respect for rights, including the right to fair and just working conditions. The poverty of the working conditions of journalists in Albania as well as the belittlement of their work is pushing them to consider extreme and dangerous measures such as a state-controlled licensing system for journalists. The government of Albania must address violations of labour laws by employers and must ensure that working conditions for journalists are compliant with international and national legal norms including Article 31 of the EU Charter of Fundamental Rights.

The public discussion was aimed at further involving the Albanian authorities to meet international standards on the protection of journalists and strengthen safeguards to ensure that they can safely work.

In addition to discussing media professionals’ safety and providing journalists with key guidelines and resources to protect themselves, a booklet prepared by ‘Res Publica’ Centre offers journalists and media actors advice on how to be proactive and use existing mechanisms, including legal ones, to ensure protection. The research shows that many cases of intimidation and harassment go unreported partly because media professionals are not aware that such mechanisms exist.

The participants were also informed about the European standards and key responsibilities of the Council of Europe member states deriving from Article 10 of the European Convention of Human Rights to protect journalists and freedom of expression, the jurisprudence of the European Court of Human Rights, and instruments like the Platform for the Protection of Journalism and Safety of Journalists. During the event, Albanian journalists shared their experiences of threats and intimidation, providing a special focus on how women journalists are disproportionately exposed to such threats.

This activity is organised by ‘Res Publica’ with the support of the action on “Freedom of Expression and Freedom of the Media in Albania” (JUFREX 2), part of the joint European Union and Council of Europe programme “Horizontal Facility for Western Balkans and Turkey 2019-2022”.