Longer-term future of the ECHR System

The work on the longer-term future of the Convention System builds on the results of the Interlaken, Izmir and Brighton High-Level Conferences on the Future of the Court. The Interlaken Declaration, adopted in 2010 set the schedule for the reform process: the conference “

Subsequently, in the 2012 Brighton Declaration, the conference, amongst other things:

35 c) Invite[d] the Committee of Ministers, in the context of the fulfilment of its mandate under the Declarations adopted by the Interlaken and Izmir Conferences, to consider the future of the Convention System, this consideration encompassing future challenges to the enjoyment of the rights and freedoms guaranteed by the Convention and the way in which the Court can best fulfil its twin role of acting as a safeguard for individuals whose rights and freedoms are not secured at the national level and authoritatively interpreting the Convention;

d) Propose[d] that the Committee of Ministers carry out this task within existing structures, while securing the participation and advice of external experts as appropriate in order to provide a wide range of expertise and to facilitate the fullest possible analysis of the issues and possible solutions;

e) Envisage[d] that the Committee of Ministers will, as part of this task, carry out a comprehensive analysis of potential options for the future role and function of the Court, including analysis of how the Convention System in essentially its current form could be preserved, and consideration of more profound changes to how applications are resolved by the Convention System with the aim of reducing the number of cases that have to be addressed by the Court;

f) Further invite[d] the States Parties, including through the Committee of Ministers, to initiate comprehensive examination of:

i) the procedure for the supervision of the execution of judgments of the Court, and the role of the Committee of Ministers in this process; and

ii) the affording of just satisfaction to applicants under Article 41 of the Convention; and

g) As a first step, invite[d] the Committee of Ministers to reach an interim view on these issues by the end of 2015.

At its 122nd Session, the Committee of Ministers instructed the CDDH to submit a report containing its opinions and possible proposals in response to paragraphs 35.c) to 35.f) of the Brighton Declaration. These instructions formed part of the terms of reference of the Committee of Experts on the reform of the Court (DH-GDR) for the biennium 2014-2015. Drafting Group “F” on the Reform of the Court (GT-GDR-F) was established to conduct preparatory work.

Special working methods and an inclusive approach have been employed in view of conducting 1) a comprehensive analysis of potential options for the future role and function of the European Court of Human Rights, including analysis of how the Convention System in essentially its current form could be preserved, and 2) consideration of more profound changes, as well as 3) a comprehensive examination of the procedure for the supervision of the execution of judgments and the awarding of just satisfaction, all taking into account the Committee of Ministers’ invitation to “think out of the box”. An “open call for contributions” was launched, the intergovernmental work was open to seven independent external experts:

as well as to ad hoc experts who participated in the preparatory work:

Work conducted in other instances of the Council of Europe and at the Conference on the long-term future of the Court, organised by the PluriCourts academic network in Oslo (7-8 April 2014), was taken into account. This report also considers the implementation of and further follow-up to the Brussels Declaration “on the implementation of the European Convention on Human Rights, our shared responsibility” (27 March 2015).

Four overarching areas were considered as crucial for the longer-term effectiveness and viability of the Convention System:

The challenges inherent in each of these fields were identified, along with the responses to be given by all actors in the Convention System.

The report on the longer-term future of the System of the European Convention on Human Rights was adopted by the CDDH at its 84th meeting (7-11 December 2015) and subsequently transmitted to the Committee of Ministers.

After seeking the opinion of the Court, which transmitted its comments on 1st March 2016, the Committee of Ministers adopted the report at its 1252nd meeting (30 March 2016, item 4.3).

The Deputies welcomed the report; took note of the Court’s comments as well as its appreciation for the manner in which the CDDH conducted this exercise; endorsed the solutions proposed in response to the present and future challenges identified in the CDDH report concerning (i) the authority of the Convention: its implementation at national level; (ii) the authority of the Court; (iii) the authority of the Court’s judgments (execution of judgments and its supervision); and (iv) the place of the Convention mechanism in the European and international legal order; agreed on the follow-up to this report and invited the relevant bodies to report back to them by 31 December 2017 on the follow-up action taken. They also agreed to reconsider the issue of resources to respond to the challenges identified by the CDDH in light of its conclusions in §§ 130 iii) and 204 of the CDDH report.

Concerning the follow-up work to the report, you are invited to consult the webpages dedicated to this activity of the DH-SYSC within the framework of the current biennium. 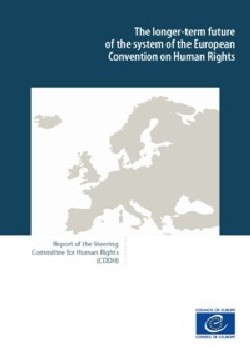 "In these turbulent and fragmented times, the European Convention on Human Rights is an anchor. As a basis for joint action be tween 47 member States, it empowers European governments to act together in order to combat shared threats to Europe’s stability, while still safeguarding  liberty. Where politics stalls or falters, the Convention  can move us forward, keeping the doors of diplomacy open even when relations are fraught. Not only does it provide a common ground between nations, based on agreed laws and shared values: by setting out the fundamental freedoms all in Europe must respect, the Convention is a source of cohesion in our increasingly dive rse societies, too."

Thorbjørn Jagland, Secretary General of the Council of Europe