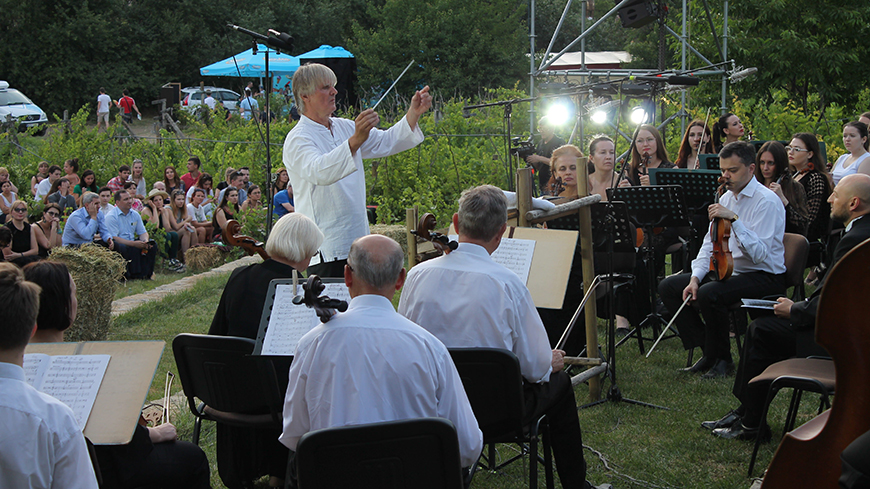 The DescOperă (Eng. – discover) festival is a special music event, of rare beauty, held at the foothills of the Orheiul Vechi Reserve cliffs. This event brings opera and classical music out of the traditional settings into the heart of nature. The festival goers have the opportunity to enjoy perfect weather, fresh air, beautiful scenery and classical music, performed live on an improvised stage, set right in the middle of nature.

The festival is an annually event, it is held on the third weekend of June and is visited by more than 5000 local and foreign tourists from Sweden, Germany, Austria and Romania. During the event, the spectators can discover the beauty of classical music in a genuine rural landscape. The natural amphitheatre provides an ideal sound for the orchestra and the voices of opera soloists. The participants have the opportunity to visit and explore the Reservation – the site, the monastery, the Christian ruins, the museum and the local surrounding area.

Orheiul Vechi Landscape is well known in the Republic of Moldova and among international specialists. It represents a group of exceptional archaeological sites, located in a natural fortified space, with unique features on the world scale. Being a result of the millennial impact of the human genius on the environment, the Landscape Orheiul Vechi represents an extraordinary deposit of heritage values, a place of rare beauty and great attractiveness which deeply impresses each visitor.

The Reserve includes three archaeological sites: Peștera (Cave), Butuceni and Mașcăuți, dating between ca. 30.000 BC and 1800 AD. The exceptional defence potential of the Landscape and its connection to the natural trans-regional communication network have been ingeniously turned into account during the Early Iron Age and the Middle Ages by the societies whose main resources were provided by war, trade and political domination.

The archaeological remains within the Landscape reveal very intense demographical and cultural interferences, bringing together people and cultures specific to the territories between China and the Carpathians, Anatolia and Baltic Sea.

Human settlements have brought significant transformation to the landscape through building large defensive structures and digging over 200 caves and grottoes, as well as by the dramatic deforestations. Thus, the Orheiul Vechi Landscape the joint work of nature and man.

rarity and unique characteristics of the Orheiul Vechi cultural and natural Landscape also contributed to the arrangement and development of sacred spaces. It is well known that rocks and caves are often deified, or are used as areas for carrying out religious, magic and ritual acts.

The idea to organise an open-air opera concert in the Orheiul Vechi Reserve came from the Austrian conductor Friederick Pfeiffer who in the summer of 2015 visited the National Opera and Ballet Theatre „Maria Biesu” of Chisinau to conduct a production of Verdi’s “Requiem”, in memoriam of Maria Biesu. During his stay, he was accommodated at Butuceni, where every morning he strolled along the Reserve enjoying its scenic landscape to find inspiration to better rehearse Verdi’s music. On one such stroll he met Anatol Butnaru – the host of the Eco-Resort Butuceni and that is how the idea to hold a musical event at the foothills of ancient cliffs, in the heart of nature, was born.

The event was followed by the press and by several TV channels, and the project results are used in order to promote Orheiul Vechi as a touristic destination and unique natural landscape.

Thus, the first edition of DescOperă festival took place in June of 2016, with a traditional production of Verdi’s “Rigoletto” and “Requiem”. In June 2017, at the Festival’s second edition, the National Philharmonic joined the festival with both a symphony production and a gala-concert of J. Strauss music, while National Opera and Ballet Theatre „Maria Biesu” performed G.Bizet’s “Carmen”. The third edition of June 15-17, 2018 featured opera productions by Strauss, Verdi and Orff.

The objectives of the project are:

· To diversify the opera opportunities for the public.

· The popularization of culture in society, especially in rural areas and the inclusion of regions both on the consumer culture, but also as a result of profitability of cultural-touristic events

· Element of tourist attraction and positioning of Moldova as a generator of quality cultural events in the region.

The main risks related to this event can be divided into several categories. First of all, the natural risks can be mentioned. Because the event takes place in June, we can expect bad weather, as it happened in 2016 and 2018 when because of intense rainfalls the event had to be postponed by one day. But the audience was a very good one, and the organisers managed to prepare all the technical details despite the bad weather.

The second very important obstacle is to prepare all the arrangements and to install the equipment without damaging the natural landscape. A dense number of tourists and visitors were invited to attend this event, so the organisers were instructed to prevent the negative effects of economic, tourist and leisure activities. These actions were directed to help decrease the negative impact of anthropogenic activity in the Reserve.

Another obstacle was the presence of a certain lack of interest of the population in the Republic of Moldova towards classical music. Opera has quite a short history in Moldova, reaching a starting point only in the second half of the 20th century. The last decades of the Soviet period represented a blooming epoque of the Moldovan Opera, when the Opera Hall in Chişinău was erected. In the same period, the greatest Moldovan soprano Maria Bieşu was performing in the most famous operas around the world. The fall of the Soviet Union led to a transition period when culture and opera were affected by financial issues. Despite the fact that the Moldovan opera continued to generate new talents many of whom are nowadays performing in Moscow, Vienna or Milan, the perspectives are not the brightest ones, and the state should consider taking several measures regarding increasing the popularity of opera among Moldovan citizens and potential tourists, as well as strengthening the capacities of the Moldovan school of opera in order to maintain its high quality and prestige.

The editions of DescOperă marks a leap forward in cementing partnerships and investing in long-term infrastructure to ensure a sustainable future for the festival. DescOperă’s success is due to the strength of its public-private partnerships between the local community, the Moldovan Government’s heritage/cultural institutions and private sector festival professionals. The event is organised each year with the support from Sweden, USAID, and strategic partners including Wine of Moldova and the Swiss Agency for Development and Cooperation. More than 5000 visitors attend the event each year from Moldova, Austria, Germany, Italy, Poland, Romania, Sweden, Ukraine, and USA, proving the potential of the festival to act as a magnet for inbound tourism and an engine for regional economic growth. Over $ 23,500 was generated from ticket sales, up 30% from 2017, resulting in higher revenues for locally-owned businesses. This success is the result of the event’s growing reputation as a unique world-class cultural event, improved effectiveness of marketing strategies on social media and Moldovan TV, and easier ticket access for festival attendees including via online the ticket hub iticket.md.

The event plays a key role in institutionalizing and strengthening this partnership for long-term sustainability, ensuring that each partner takes on risks as well as benefits. Resulting key developments include a firm agreement for the festival to take place every third weekend of June, the inclusion of the festival in the national cultural agenda/budget, and reinvestment of revenues in essential infrastructure in the local community, including adding ambient external lighting, building a second footbridge across the river, and creating an additional summer stage to showcase performances.

After the past editions of DescOperă, opera became more attractive amongst Moldovan consumers by its staging in a unique natural landscape. There is a growing interest in how cultural festivals can help to build strong and cohesive communities. This project explores ways in which the opera festival may contribute to social inclusion goals. Findings suggest that these festivals may contribute to social inclusion across four areas of society – consumption, production, political engagement, and social interaction or communities – through factors such as providing opportunities for local participation, learning new skills, and promotion of cultural tourism.

to this, we can divide the visitors into 2 main categories. The first ones are the opera goers who have the possibility to participate at opera shows directed by famous stage directors in a unique and exceptional natural landscape nominated to become part of the World Heritage List. The second category of beneficiaries are the inhabitants of Orheiul Vechi who have different businesses related to local tourism, this event promoting the region as an important touristic destination, with unique sightseeing and cultural events. There are more than two hundred people involved in local tourism activities.

The 2016 edition experience showed a very good trend and the Chişinău Opera increased their visitor numbers in 2016, as well as the international partnerships and cooperation, some of them started at the first edition of DescOpera. The local development issues also benefitted from some positive changes, firstly because the increased number of tourists means increased revenues for the local population, and secondly because several development partners of the Republic of Moldova are also partners of DescOpera and are very interested in investing in Orheiul Vechi sustainable development.

Due to the open-air music festival DescOpera, both Moldovan opera and Orheiul Vechi Reserve will become more popular and will increase their touristic potential. This being DescOpera’s fourth edition, will continue to be hosted at Orheiul Vechi, thus becoming a beautiful tradition and important cultural event at the national and even international scale.

The most important lessons that our country learned during the organisation of this event are related to the promotion of the festival at international level. The civil society that was very actively involved in the promotion of the Orheiul Vechi Reserve as being one of the most important touristic destinations in Moldova helped a lot. Moldovan Tourism companies were also attracted in promoting the event.

We learned how to use social media in order to analyse the impact of this festival on the visitors and how to interpret their comments and suggestions in order to improve future editions. In addition, we constantly ask local pensions about the impact of the event and means of improving their results and quality.

Last but not the least, experience showed that DescOperă is not only a music festival. Through interaction with local actors, it is also an opportunity to observe and participate in the daily activities of the Moldovan people. The hosts of Trebujeni resorts offer lessons in traditional songs and dances, while the experienced local chefs teach visitors how to prepare Moldovan cabbage rolls and pies. For people who are interested in authentic traditional crafts, the organisers prepare a workshop in corn husks weaving, a craft that kept our ancestors busy for ages.