Volunteering During the Socio-Educational “Daffodil Campaign” 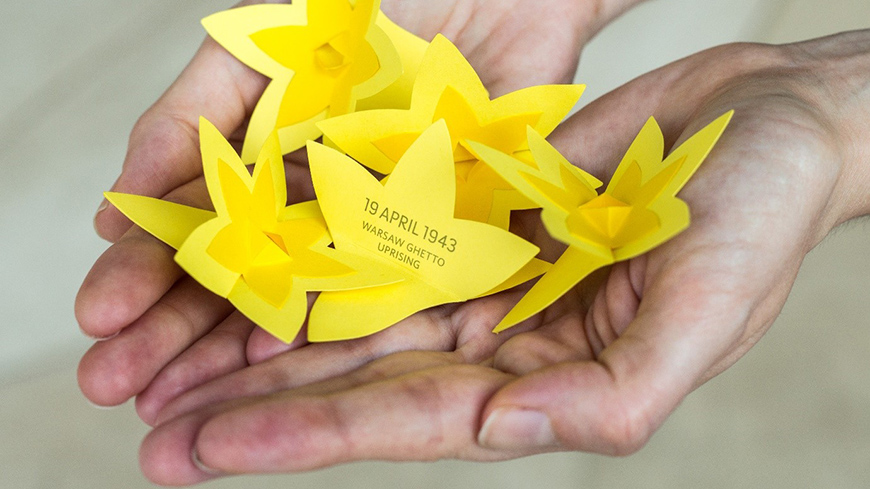 Museum of the History of Polish Jews

April 19th marks the anniversary of the Warsaw Ghetto Uprising – the largest armed uprising by Jews during World War II. It was also the first urban uprising in occupied Europe. On this day, the POLIN Museum of the History of Polish Jews organises its “Daffodil Campaign”, engaging hundreds of volunteers who, on the streets of Warsaw, give out paper daffodils which are attached to clothing as a sign of collective remembrance. Volunteers are provided with t-shirts and bags with the Campaign logo as well as with identification badges for when they hand out daffodils to Warsaw residents and to tourists.

Our volunteers are a very diverse group – there is the founder of a start-up, a father of three children, a couple who, a year ago, celebrated their fiftieth wedding anniversary - more than 5,500 different people with different stories. Most of them are quite young – this year, 55% of our volunteers no more than nineteen years of age.

From its beginning, the campaign has borne the slogan "Łączy nas pamięć" ("Memory Unites Us”), which emphasises the strength of community, the importance of solidarity and the need for dialogue across divisions. We deeply believe that memory of the past is one of the overarching values that unite us and give us a common identity – regardless world views or political beliefs.

Through this campaign, we also wish to people aware that the Warsaw Ghetto Uprising is a part of Polish history. In 2013, when the Museum organised the first “Daffodil Campaign”, we knew about the results of research conducted by the Centrum Badania Opinii Społecznej (the Public Opinion Research Centre). To the question “For whom do you think, today, is the Warsaw Ghetto Uprising important?”, 73% answered only for Jews, while 31% for Poles. When that research was repeated in 2018, 49% answered that it was primarily important for Poles. This 18% increase shows that Poles are increasingly recognising the Uprising as a part of their own history. This change would not have happened without the works of the volunteers involved in the “Daffodil Campaign”.

However, due to the pandemic, the Museum decided to move the entire operation onto the Internet and not to distribute the daffodils on the streets of Warsaw. Volunteers were committed to supporting the online activities, adding an Anniversary overlay onto their profile picture, sending SMS’s to friends and family and sharing their photos (bearing the daffodil symbol), using hashtags such as #ŁączyNasPamięć or #AkcjaŻonkile (these had a total reach of 1.5 million).

On the recruitment form, we ask potential volunteers about their motivation – what makes them wish to become involved in the Campaign:

Commemoration: "I believe that we have a duty to preserve the memory of the Warsaw Ghetto and of the Uprising";

Self/family identity: "Because the memory of Holocaust victims is particularly close to my heart. I lost part of my own family";

Our own tradition: "This is the most important time of the year for which I’ve been preparing for several months – this is my April tradition";

Volunteering as a hobby: "During my senior high school period, I took part in various activities. Moving back to Warsaw, I felt that I had the chance to do something more";

Curiosity and new experiences: "Several times, over the last two or three years, I saw people handing out daffodils on the streets of Warsaw and I wanted to be on the “other side” of this venture".

It is very difficult to attract males as volunteers, especially those aged under 19. “Daffodil Campaign” volunteering is strongly feminized. This year, as many as 72% of volunteers was female. In 2019, that figure was 73% and this is a trend which has continued over the years.

Each year, we make efforts to attract more males to become volunteers, including the careful selection of “Campaign Ambassadors”, popular and recognisable celebrities who appear on posters and promotional banners around the city. As well as people from the worlds of culture and art, there are also athletes and pop music stars who are invited to attract a new group of volunteers. However, males still make up only a quarter of all daffodil distributors.

Thanks to these volunteers, recognition of the “Daffodil Campaign” is increasing every year. In a survey conducted in June, to the question:

Have you heard of the socio-educational “Daffodil Campaign” organised on the anniversary of the outbreak of the Warsaw Ghetto Uprising?

This change has been made by the volunteers themselves. For them, participation was, among other things, an opportunity to test themselves and to overcome their own barriers, e.g. shyness and a lack of faith in their own strengths. Many volunteers consider, as a plus, contacting people whom they meet on the streets, as well as being amongst people who share similar values and who wish to share them with others. Volunteers admit that, thanks to their participation in the Campaign, they have become more sensitive to other people and their histories (When you hear the story of a person who survived and who remembers, that story changes you – this is how one of the volunteers described that meeting in the survey).

93% of the volunteers stated that they would participate in the Campaign again in 2021.

We do not accept volunteers purely on the basis of their application form. We want to meet them personally and to talk to them about their motivations and experiences. This is why we arrange meetings, at the Museum, with new volunteers: "Asia (Volunteer Coordinator), with whom I spoke once, remembered my name and used it in a conversation we had a few weeks later. That was great! I felt that we were not just a mass of people needed to give out flowers, that there was something connecting us".

In 2019, we conducted information and recruitment meetings with over 800 people.

As best as we can, we endeavour to prepare our volunteers for the role which they will perform on 19th April. Since the beginning of the Campaign, we have organised over 80 such meetings for volunteers, 95% of whom assess positively their organisation and usefulness.

New volunteers need to undergo a two-stage recruitment process – they submit a form in which we ask about their motivation, why they wish to volunteer for the “Daffodil Campaign” and then there is a recruitment interview at the POLIN Museum. We then provide people, who qualify, with a training packet, lectures, workshops, city walks and meetings with witnesses to history. In other words, they receive everything they need in order to increase their knowledge about the Warsaw Ghetto Uprising.

3. Organise something special for them:

At POLIN Museum, for volunteers, we arrange integration meetings, educational trips and study visits to other institutions. In this way, we wish to thank them for their commitment, as well as to show that we simply want to spend time with them.

It is always nice to receive a “thank you” email and to receive a certificate acknowledging your participation as a volunteer, which may be useful when applying for university. If you have the opportunity and the funds, arrange a post-event gathering with light refreshments. As American professional, political campaigners say, everything else can be lacking, except for a smile and pizza for the volunteers!!

5. Open up your organisation to volunteers:

Start thinking of volunteers as individuals who contribute to the institution through their participation in organised events and in the everyday support of the institution’s activities. Remember – volunteers are your brand’s ambassadors and are people who will give you honest feedback on how the institution functions and how it can operate.