The Western and Northern Territories Network 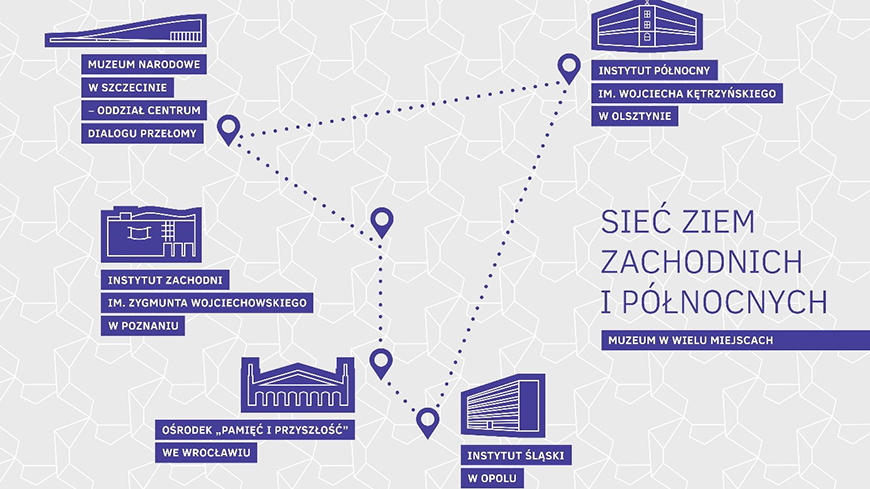 The Western and Northern Territories Network is an implementation of the decade-old postulate of building the Museum of Western Territories of Poland on the initiative of the Ministry of Culture and National Heritage of the Republic of Poland. The consortium implements this project in the form of a “museum in many places”, which – despite having no single building of its own – fulfils all the functions of a museum while being able to reach wider audiences thanks to the adopted formula.

The formula of a “museum in many places” offers a real opportunity to significantly increase the scope of its impact and reach a wider audience – both in Poland and abroad. This is supported not only by special promotional activities, debates, conferences and seminars organized as part of the Network, but also by a special scholarship programme dedicated to young researchers from abroad, whose research addresses issues corresponding to Northern and Western Territories research programme, and who get the opportunity to work with Polish sources and literature as part of their scholarship stays.

The Network’s activities are focused on attempts to talk about the post-war history of the lands annexed by Poland in 1945 in a way that would fill the gap between the anachronistic approach of proving the Polishness of these lands, which were referred to as “Regained”, and the excessive emphasis of their German past. The focal point of this complex and multi-faceted story is, therefore, the undisputed phenomenon of reconstruction of Western and Northern Territories from war damage and the construction of new state and social structures. This set of phenomenal achievements of civilisational significance corresponds to the respect for the multicultural legacy of these areas, which was built in the post-war period. It was a great effort of the Polish spirit, thanks to which, for decades to come, the new inhabitants of these lands could feel at home, and the adoption of the existing German heritage, which became common, following the calls of the bishops: “We forgive and ask for forgiveness”. It is a story of living historical experience, constructed to a large extent in the conditions of civic debate. This is evidenced both by the social commitment to the ten-year-long debate on the creation of the Museum of Western Territories, as well as by the contribution of individual donors and witnesses to history in the process of creating exhibitions in Wrocław, Szczecin and the mobile exhibition. It was also evidenced by the readiness of many researchers to conduct and develop research on the complex history of the Western and Northern Territories, starting with the topics of resettlement, reconstruction in the first post-war years, the activities of Cardinal Kominek, crowned with the letter from Polish bishops to their German brothers, leading to anti-communist opposition. The implementation of these multidimensional activities is also possible thanks to the growing resources of oral history archives and the donations of memorabilia, documents and shared memories.

The obstacles were mainly organisational. It was not always easy to organise an appointment with all parties included in the Network and coordinate the activities of scientists of these institutions.

The Network became a platform for international discussion about the difficult experiences of resettlement and the accompanying socio-cultural processes, which leave a clear and lasting mark on the identity of future generations of inhabitants.

Furthermore, the Network created a space for cooperation between researchers, museum workers and educators as well as for extensive international discussion about the difficult experiences of resettlement and the accompanying socio-cultural processes, which leave a clear and lasting mark on the identity of future generations of inhabitants of these lands.

The research scholarship of the Western and Northern Territories Network, aimed at enabling foreign researchers to benefit from Polish sources and scientific achievements, thus broadening their perspectives in research on the recent history. The dissemination of knowledge about territories in question and the available source base in the international scientific circles was also a measurable benefit for the Network.

The planning and management system of the Network’s activities allowed, within the framework of centralised initiatives, to activate individual institutions that co-create the Network and slowly but gradually influence the way and form of their functioning within the scope of conducting scientific research. In the longer term, this resulted in internal changes and modifications in the way they operate, increasing innovation and improving the quality of achieved results.

The educational activities regarding the field of Western and Northern Territories was an attempt to respond to the growing interest, which is particularly visible among the inhabitants of these lands. The proposed solutions were addressed to a wide audience made up of both young and old people. They took advantage of various solutions aimed at activating local communities, such as urban games, museum classes (both local and excursions), educational workshops and contests.