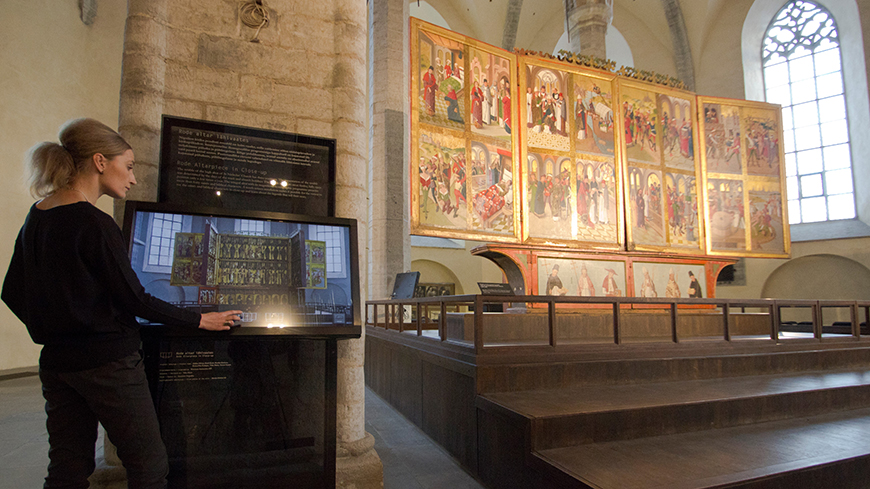 The Art Museum of Estonia Niguliste Museum’s project The Rode Altarpiece in close-up focused on the technical analyses and conservation of the altarpiece of the high altar of St Nicholas´ Church in Tallinn (1478-1481) completed in the Lübeck workshop of the master Hermen Rode. This is one of the most splendid and best preserved late medieval northern German altarpieces in the whole world. Comparative analyses were carried out within the framework of the project with another altarpiece made in the same workshop, that of the Lübeck painters’ gild (1480-1490) located in the St Annen Museum in Lübeck.

Extensive restoration work on the altarpiece took place between 1975 and 1992 under the supervision of specialists from the Soviet Union’s Institute for the Scientific Research of Restoration in Moscow (BHИИР). This long-term work was interrupted due to political changes in the Soviet Union at the beginning of the 1990s. The Russian specialists managed to mostly restore the work, but the altarpiece’s splendid sculptures had still only been partially cleaned.

The focus of this project was on conducting imaging- and information technological analyses and material examinations, the comprehensive documentation of the work, and the mapping of this information. A great deal of attention has been directed towards involving the public through educational programmes, workshops and multimedia programmes reflecting the results of the research conducted (website, blog, interactive multimedia programme, science-web, short films documenting the work done in the project, etc.).

The project was intended to popularise this field and to find ways of presenting to the wider public activities that are mainly hidden behind the closed doors of museums. Each of the four fields of action – conservation, technical investigation, documentation and education – have specific (research) activities, didactic output for professionals in the form of workshops led by international specialists and awareness-raising events for the general public.

Objectives of the project:

· To complete the conservation of the sculptures of Tallinn’s altarpiece.

· To carry out comprehensive material/technical examinations of Tallinn’s altarpiece.

· To carry out analogous examinations of the other central work signed by Hermen Rode, the altarpiece of the painters’ guild of Lübeck (1480–1490), which is located at the St Annen Museum in Lübeck.

· To create a base for more extensively mapping out the creative work ascribed to Hermen Rode.

· To map out and assemble the sectorial scientific resources for the technical analysis of art in Estonia, in order to apply this information and knowledge in the future in more extensive research work associated with heritage.

· To offer Estonian information technology and scientific resources for use outside of Estonia as well.

· To create a prototype for the research, conservation and popularisation of analogous works of art.

· To introduce the (scientific) work of the project to a wider audience, both within the profession as well as beyond the profession.

· X-radiography – the manufacturing techniques of the wooden parts of the altarpiece. The investigation was carried out in cooperation with the Estonian Tax and Customs Board.

· RTI-photography – Reflectance Transformation Imaging enables the visualisation and analyses of the surface structures of the altarpiece by means of animated raking light. The Investigation was carried out in cooperation with Archaeovision R&D.

· Analysis on pigments and binders – both on paintings and sculptures. The goal was to chart the technical structure of the layout and composition of the ground and paint layer and to compare the information with other art works attributed to Rode’s workshop.

· The investigation was carried out in cooperation with the Chair of Analytical Chemistry, University of Tartu and the Estonian Environmental Research Centre.

· Wood analysis /dendrochronology – on the structure, paintings, sculptures. The goal was to gain a more accurate estimate of the origin of the structural material and of the author/carver of the wooden parts and sculptures (so far unknown). The investigation was carried out in cooperation with the Department of Geography, University of Tartu.

· Creating a 3D survey and model as a basis for archiving, documenting, contextualising and visualising the sets of scientific data.

· The investigation and prototype was created in the framework of an international hackathon “Rode Imaging Event”.

on the Rode Altarpiece from the aspect of conservation was the starting point for a major research project with the aim of contextualising the retable in the wider sphere of 15th century art and gaining a better understanding of the working methods of Hermen Rode’s workshop. In the course of the project, it was realised that conservation of such a large scale complex altarpiece was going to take much longer than three years, so the conservation process was partially finished. At the moment, the conservation of the altarpiece is continuing in the Art Museum of Estonia and in the “Kanut” Conservation Centre.

· The performance of comprehensive research and analysis on two very important works of art in the European context, the Tallinn and Lübeck altarpieces completed in Hermen Rode’s workshop. The actual Lübeck altarpiece “met” the virtual Tallinn retable in the major international exhibition of Hanseatic art Lübeck 1500. Kunstmetropole im Ostseeraum (20 September 2016-10 January 2017) where the presentation to launch the web application was held.

· The partial conservation of Tallinn’s altarpiece.

· The development of information technological analyses and also, in many cases, their use for the first time in researching medieval Hanseatic art and in making this information available to the public at international level.

· The strengthening of scientific and research potential and the creation of the corresponding network within Estonia.

· The creation of a cooperation network with international partners and the involvement of European heritage institutions (museums, research institutes) in a research activity that forms the basis for other similar cooperation and research projects.

· The creation of innovative prototypes in the field of information technology (3D documentation, the archiving of large volumes of information, etc.).

· The popularisation of science and art, making the scientific results available to a wider public in different forms (multimedia and web presentations, publications, workshops, educational programmes)

Bringing the Tallinn altarpiece and the work of Hermen Rode to the attention of the broader public, and the side of the project popularising its scientific results was an important priority. Alongside professional scientists, this also relayed the importance of the heritage of the Middle Ages to a broader public and opened up new knowledge.

In addition to researching the altarpiece, the major objective of the Rode project was to map out and bring together the specialised scientific resources for technical research in Estonia, in order to later apply this information and knowledge in broader investigation activities associated with heritage. Estonia’s resources were mapped out and tested within the framework of this project in order to achieve synergic co-operation between the arts and sciences.

In today’s state of research, it can be confidently affirmed that there are specialists and equipment in Estonia at an international level of quality, but they are diffused between various institutions and researchers. Within the framework of the Rode project, we have brought together an interdisciplinary group of researchers from natural and humanistic sciences who work together synergistically, and whose different types of know-how and close cooperation have created voluminous additional knowledge concerning one of Estonia’s most important works of art, and have formed a basis for tremendous development in this field in Estonia and abroad.

One of the important parts of this project was the work of education and popularisation. Educational programmes associated with this project were developed for different age and target groups, focusing on the popularisation of science, the integration of the humanities and the sciences, and the broader popularisation of heritage by way of new perspectives (conservation, research using natural scientific methods, the application of imaging- and information technologies in researching heritage, and the attractive presentation of the results). All age groups (preschoolers, primary school pupils, secondary school pupils, students in specialised education at the level of institutions of higher education, students in doctoral studies, professionals in supplementary training and the wider public) were involved in these educational programmes, which are tied in with national educational curricula and educational objectives. Due to an innovative perspective, the scale of target groups was expanded through these educational programmes, involving, in addition to heritage specialists, groups of people and educational objectives associated with natural sciences and information technologies in the circle of potentially interested persons.

2 Funding from the EU or EEA / Norway grants