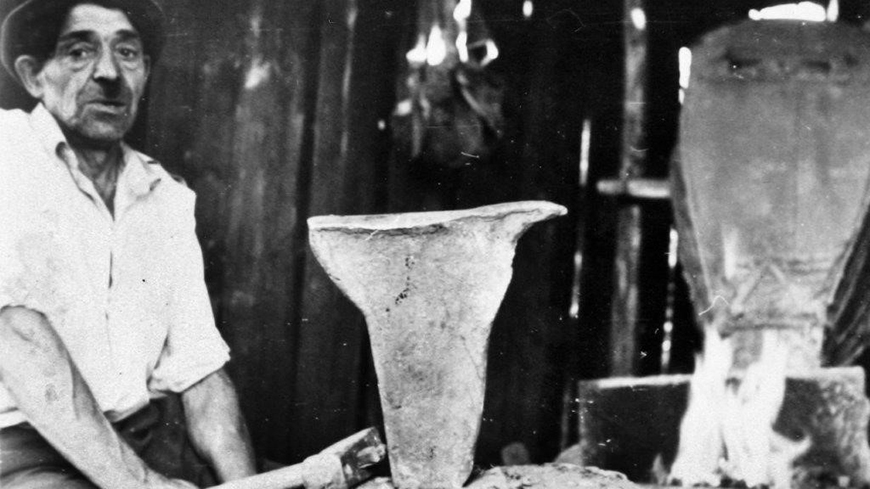 In Romany culture different branches of traditional crafts and professions (such as boiler making, ironware, woodwork, basket weaving, sieve craft, soothsaying, playing music or herbal medicine) have existed throughout the ages. In Poland they are now in decline. Handcrafts have always represented an essential element of cultures of East-Central Europe’s migratory groups. Even some Romani proper nouns got their names from the performed crafts. To this day in some areas in the Carpathians (for instance in Spiš, Slovakia) the term Gypsy is used for a “smith”. Not until the breakout of The World War Two had a detailed census of the Romani population been taken in Poland (regarding the occupied professions). Their migratory lifestyle was connected with a spread of their professions in the whole of Central Europe. A relocation of Romanies came from looking for trade areas.

Due to the development of modern industry, the demand for handcrafts has dwindled. As a result, the traditional crafts and professions decline rapidly. Another reason for this extinction is the inflow of various cheap, finished products. Changes in lifestyle have caused a decline in interest in continuing some occupations (e.g. soothsaying, herbal medicine). It is the last chance to capture the elements of the dying culture.

The ethnographic field studies consisted of collecting oral testimonials as well as photographic and film documentation of the crafts and professions. Narratives of witnesses of the performed professions combine to create an image of a material culture, the traditional lifestyles and also the Romanies’ role in local societies. The visual documentation archived the professions. It also became a significant tool to transfer knowledge to future generations. The footage may be used as an instructional tool in the practices of certain occupations.

The results of the projects are:

The challenge in our projects was to gain access to the Romany community, which is distrustful of those who are not members of the Romany ethnic group due to the difficult experiences of living on the margin of a majority society for hundreds of years. And in this case, the point was not only for Romani people to let members or the project group inside their homes, but also talk about themselves in front of the camera and this being shared with the public later on. In particular, less educated people were not entirely aware of what we were doing and for what purpose. In order to reach them, it was necessary to use the help of people who they know well and trust.

It was important to follow the ethical rules applied in oral history projects when conducting interviews, to treat interlocutors as subject rather than objects and respect their fundamental rights and dignity. Another problem when implementing oral history projects is the matter of social responsibility of the implementers, especially with regard to specific groups, such as ethnic and religious minorities or marginalised groups. As part of our Romany project, we conducted a long consultation procedure with experts as regards the method and manner in which we can show on screen how they can be perceived by other members of the Romany community. Failure to comply with these guidelines might have caused our interlocutors to face serious problems or be excluded from the community.

An additional difficulty was that we studied disappearing phenomena – professions which are practically no longer performed in Poland. So as not to base exclusively on memories and photographs, we travelled to Slovakia, where Romany craftsmen continue to be active, although in many cases they are aware that they are the last representatives of their professions. Due to the fact that these people are scattered, we needed to travel for a long time to places which were frequently remote, situated in the country’s mountain areas.

In Poland, public awareness with regard to Romany people is based on negative stereotypes which are passed down together with culture from generation to generation. The stereotype comprises elements such as work avoidance, theft, begging and fraud. The image is heavily reinforced and perpetuated by mass media. Seeking sensation, they excessively highlight all negative behaviours and thus stigmatise this ethnic minority.

Sociological research shows that Romani people are the most negatively rated group among all national and ethnic minorities in Poland. According to the most recent survey by CBOS, some 75% of the respondents demonstrated a negative attitude towards Romani people. This renders it difficult for Romany people to find jobs when the professions they used to pursue have disappeared, which further contributes towards marginalisation. Recreation of the Romany tradition in the scope of work may strengthen the Romany people themselves, as well as change public perception of them. Such action is all the more important because this group does not have its own written tradition, so it needs help with restoration of its heritage while it is still possible to collect gather memories of those who remember it.

In this case, social change consists of challenging the negative stereotypes about Romany people and valorising their intangible cultural heritage.

The obtained video footage referring to facts will serve to challenge these negative images. Video screenings are complemented by educational activities which apply methods of non-formal education. The aim is to improve the image of Romany people in the public awareness.

Currently, video is one of the most pervasive and successful media of communication. In particular in the case of young people, it is becoming one of the most attractive forms of non-formal education.

It can be used in various ways – for public screenings and with the use of new media (the internet). The screenings were combined with discussions and activities for people of various ages and professions. Participants in these events gain knowledge on the history and culture of Romany people. Due to the use of special intercultural exercises, during the activities the participants have the opportunity to verify the negative stereotypes they hold. The evaluation carried out among workshop participants indicates that this method of communication is effective and leads to change in awareness and attitude towards the Romany community.

Such actions also contribute towards the possibility of active participation of the Romany people in the job market; moreover, it may facilitate growth of the attractiveness of the places in question to tourists due to the discovery of major elements of their intangible cultural heritage.

The knowledge about these elements of intangible heritage of the Romany people connected with work should be shared as widely as possible, in particular with opinion-forming and educational circles (the media and educational staff at all levels), as well as school and university students. This is important in the context of challenging common negative stereotypes, which ascribe qualities such as innate aversion to any form of work and a complete lack of tradition (ethos) in the Romany community. Discussion of this topic should be the first stage of broader-scale action aimed at deconstruction of unilateral stereotypes about the Romany people.

When it comes to such projects, it is important to involve members of the community which the activities being implemented concern – i.e. implement a project “together with members of the community”, rather than “about them” or “for them”. This yields much better effects in all aspects– not only in the scope of the results achieved, but also in the scope of social impact. It is possible to accurately identify the needs and methods of reaching out to the community, and involving the community translates into sustainability of the social change we hope to achieve by implementing the project.

During these projects, we also learned a lot about teamwork in the context of long-term, non-routine and varied activities. It turned out that the most important thing was proper division of tasks in order to enable each person to do what best matches their preferences. Not everything needs to be done together; co-workers should also have their own space, for which each of them is solely responsible.