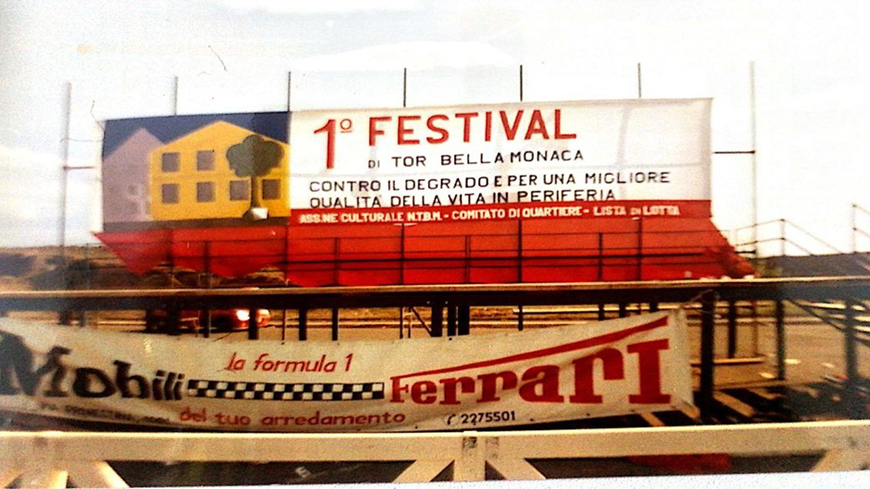 Tor Bella Monaca is a district of about 30,000 inhabitants located outside the Grande Raccordo Anulare in an area between Via Prenestina and Via Casilina. It was built in the 1980s with the intention of providing a concrete solution to the housing emergency. Today it faces problems of degradation, social fragility and a narrative stigma, as well as abandonment by the public administration. Although at the time of its realisation, the era in which the experience of the Borghetti and the barracks was ended, and housing estates sprung up in the capital the role of the welfare state was crucial. Through urban planning the objective was to take the first step towards the idea of a city where everyone’s right to housing was guaranteed. After construction of the district, the management crisis resulting from the failure of housing policies, has generated an institutional void that the inhabitants have tried to fill through forms of self-organisation as the only possible solution to the decreasing public action in the suburbs. The provision of local public services has been achieved mainly thanks to the struggles and strikes carried out collectively by associations and citizens, the oldest of whom still harbour memories of images of the tower blocks on the Via Casilina. After an initial period of development and strengthening of social cohesion and mutual aid practices, thanks to initiatives undertaken times of struggle during which strong community ties were shaped, today we witness a sort of narrowing of the spatial dimension-relational until the minimum reached threshold of the family or neighbourhood network. Since the 1990s the struggles have decreased, unable to affect the fate of the neighbourhood. Today, the new generations do not have the perception of what was done through self-organised movements of collective encounter; this memory is being lost and with it the immaterial value it represents. The current forms of resistance are reduced to self-management practices of common condominium areas or small green areas of the neighbourhood, whose proactive impetus can hardly undermine a reality that is difficult to change.

Implement processes where the historical and the collective memory overlap, to focus the attention of the inhabitants on the physical and intangible heritage that the place they live represents, leads to forming a population that continues to struggle for its preservation and conservation. Informing the neighbourhood through its evolutionary phases, marked by those who fought to emerge from a condition of exclusion and marginalization. The first phase of the work for the preparation of the exhibition will concern the research and organization of the materials to be exhibited in the historical archive of the District Committee, located in Via dell’Archeologia 55. The historical investigation will be carried out by the committee in collaboration with a group of researchers from Labsu - Laboratory of Urban Studies of the Territorial Areas of the Civil, Building and Environmental Engineering Department of Sapienza University of Rome, with whom there has been a relationship of collaboration for several years. The next phase involves planning the installation in the symbolic places of the battles of the district, through memory capsules, devices in which there is a concentration of memory linked to the place where they will be laid/buried. This may be especially for the new generations, an opportunity for the discovery and knowledge of a period far from their today, but still very present for the legacy left to the district.

Within the district of Tor Bella Monaca there is great availability of public spaces, which are however scarcely used by the inhabitants due to their current state of abandonment and degradation. This concerns both the green areas and the squares of common spaces of buildings - these areas become non-places within which forms of criminality develop that make them exclusive and repulsive. In this sense, the installations of the exhibition in some symbolic areas of the district risk not being preserved over time and becoming the object of vandalism, since the forms of control exercised in this territory are scarce. To avoid this kind of risk, it is planned to implement awareness-raising initiatives in advance, which will be carried out by the same people whose exhibition will tell the stories and events for which they became protagonists, through the creation of a solidarity network that also involves other inhabitants. The initiatives will cover days of project presentation through public meetings within the neighbourhood and mediation by the historical associations present in the area, which have always collaborated with the District Committee. Another obstacle is represented by the scarcity of funds available to the project, therefore it is planned to start a self-financing path through the Asia trade union which has about 1000 members together with the participation of the resident population. The realisation of the installations will utilise self-construction practices with the involvement of the citizens and re-cycled materials.

The desired change consists in trying to rebuild, in a more structured way, a solidarity network within the district. This initiative involves the promotion of participation, difficult to find in today’s civil society. Using memory as a resource to reactivate processes of involvement of the inhabitants can lead citizens to a greater awareness of their social and territorial context generating responsibility, enhancing the cultural heritage and this can stimulate greater affection for the area. Cultural heritage is a non-negotiable common good whose conservation and protection is the responsibility of society as a whole, including the political sphere. As a consequence, there is the need to define the roles of all the stakeholders involved in the management of the territory; so as to ensure, through historical narratives, that even the authorities can find the right meaning of its role. The lack of institutions in these territories is today a major problem and generates the risk that bottom-up practices can be substituted for public action, whose renunciation fuels the crisis of representation. Furthermore, our initiative aims to provide a valuable contribution to university research in the field of urban planning. The initiative is useful to produce a description, based on a self-narration, elaborated through historical participation in the social life of the district, with the intent of offering a glimpse of the social and territorial dynamics that characterize the place. The contribution to urban research, and planning in particular, is to provide a representation of the Tor Bella Monaca district, which constitutes the starting point for suggesting ideas aimed at guiding the realization of new urban plans and programs, an instrument that is able to bring out social actors, practices and phenomena, often not visible if not in the local dimensions, which sometimes escape the classical planning, which almost always acts on a large scale. Proposing a different way of telling and planning the city, to explain the identifying factors that characterize and define places, is one of the desired results.

Given the embryonic phase of the initiative, it is not possible, at present, to take stock of the results obtained.