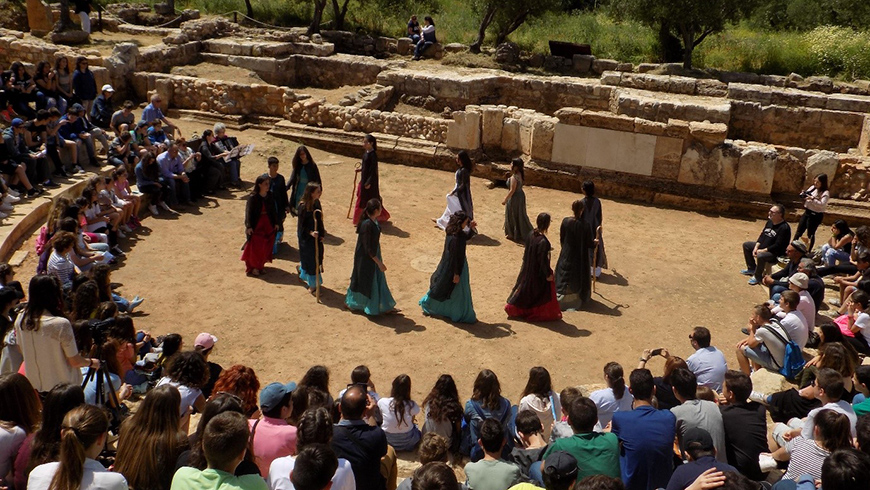 The program was addressed to high school students who are taught the lesson of ancient dramatic poetry. The aim was the experiential approach and completion of the school lesson in combination with the approach of young people with the local and wider cultural heritage of ancient theatre. It was a three-phase program. Initially, there was talk of the birth of drama and the architecture of ancient Greek theatre at the Archaeological Museum of Chania, combined the display of photos, videos, guided dialogue, observation, play, face painting and dramatization. Then, each school developed a performance of a part of an ancient tragedy or comedy (direction, acting, sets, costumes, music). Finally, in the spring we gathered in the archaeological site of Aptera, where a group of students undertook to talk about the ancient theater of Aptera, presenting its architecture. Then, they presented their performance at orchestra of the ancient theatre there. This educational action was evaluated with a questionnaire.

The main issue was to keep the children's interest and participation undiminished. The guided dialogue, the games, the making of the mask and the dramatization helped in this. Another problem we faced concerns the intention of children and schools to videotape the play within the archaeological site. However, this requires a special permit from the Ministry of Culture, which also determines the use. This was addressed by our service making the video recording and giving a copy to each school for its files.

The children attained knowledge about ancient drama and the architecture of ancient theatre. They came in contact with the cultural heritage of their homeland and got to know it better (ancient theatre of Aptera). They have evolved a positive attitude towards the cultural heritage and its protection, because when you learn something you appreciate it and revere it. Through the theatrical act, they got to know themselves and others better, became more active, and advanced their self-confidence. They developed social skills, such as cooperation, participation, teamwork, mutual respect The children actively assimilated school knowledge. With the help of the educational program, the lesson became a game and it mobilized the whole group. Thus, the children gained a positive attitude towards the lesson itself and school.

From this educational program we learned that imagination, play, observation, self-action and teamwork can contribute to: a) the acquisition of knowledge and its assimilation, b) the approach of cultural heritage and its correlation with school and the teaching of the lesson of dramatic poetry, c) the appreciation of cultural heritage resulting in the development of respect for it. The latter is not only in the interest of the participants as a theatrical act has wider recipients in the context of the society in which it is integrated.