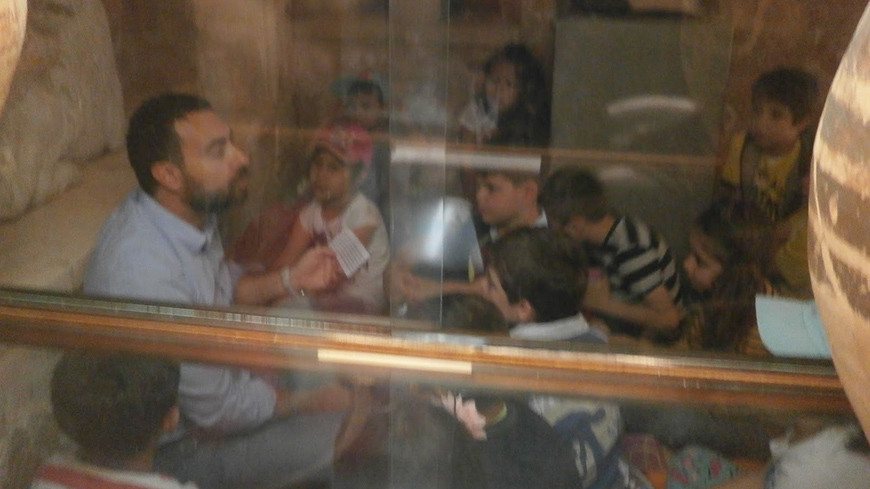 The program took place at the Archaeological Museum of Chania, in consultation with teachers who faced problematic behaviour among children in the school environment. The goal was to normalize bad relationships between children through observation, guided dialogue, and play. The program included a narration of an excerpt from a fairy tale starring a statue of the National Archaeological Museum that came to our country with the refugees of the Asia Minor catastrophe. So, the statue was designated as a refugee.

Thus, there was a discussion about refugees, the war with the parallel projection of photographic material, emphasizing the emotions that are created in their souls. We then moved on to the classroom, identifying and evaluating aggressive behaviours in illustrated stories and talking about the value of peace. During the game, the children tried to find emotions in statues, and so they talked about anger, joy, fear and sadness, at the same time, the children drew emotions on the faces of Neolithic figurines given to them in drawings.

The next action was more aimed at the relationships between the children since by chance, each child found a positive element in the character of a classmate. Finally, the children, playing the game with the statues, tried to express their feelings with their faces and attitudes.

A big problem was the bad relationships of the children. Some kids refused to cooperate with those they did not like.

The children approached the museum and the statues through storytelling, imagination, play and observation. Thus, they formed a positive attitude towards the cultural heritage.

They got to know the art of sculpture, the statues (e.g. Neolithic figurines), and the artists' attempt to convey emotions, resulting in the development of their aesthetics and love of art. Social skills were developed, such as participation, teamwork, cooperation while empathy was largely cultivated.

At the same time, they acknowledged the value of positive emotions in life, resulting in the cultivation of optimism and the removal of negative emotions. Thus, the relations between the children improved.

Cultural heritage can be a source of knowledge, imagination, play, exploration of emotions, self-criticism, change of attitudesand can bring children closer together.