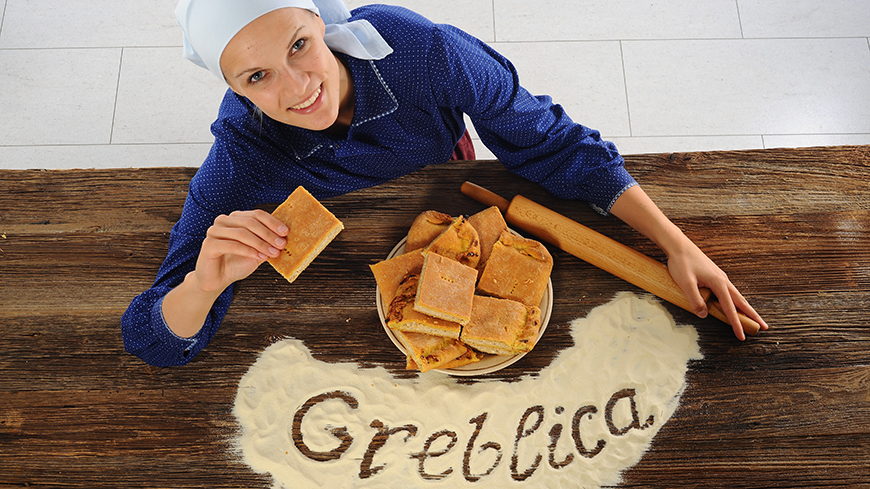 KUD Oštrc, Association for the Protection of Cultural Heritage from Rude, has been active since 1979. Today, the association has around 100 members in 7 sections: 3 folklore and 3 tambura ensembles, as well as a section called Bergmani that is active in the preservation of mining heritage. The Association participates in all major folklore events in the Republic of Croatia. In the past ten years, the Association also had around fifteen international guest visits in Europe, Asia and America. The members of KUD Oštrc actively promote the cultural heritage, and as proof of this, three items of cultural goods have been inscribed on the list of protected cultural goods of the Republic of Croatia at the initiative of KUD Oštrc.

In order to promote the Miners’ Cake (rudarska greblica) that was inscribed on the list of the cultural goods of the Republic of Croatia in 2008, KUD Oštrc organises Days of the Miners’ Cake (Dani rudarske greblice). The aim of this event is to bring the art of preparing this traditional cake to the attention of the public and different age groups. The Days of the Miners’ Cake have taken place on the first weekend of July for the past 34 years. The Miners’ Cake (rudarska greblica) is a traditional savoury cake made of cheese and nuts and as such, is an important part of the culinary and tourist offer of the city of Samobor. According to the unwritten lore, the cake was first prepared in the mid-16th century, which coincided with the mining boom in the village of Rude which, according to some historians was first mentioned in the 1st century. The first written documents about the organised mining in Rude originate from 1528. The Miners’ Cake (rudarska greblica) was present in the mines of Rude for ages. Sometimes, it was even mentioned as the only food of the miners. In time, rudarska greblica became a trademark of the village and the centuries-long mining history. Today, greblica is an equivalent of the miner’s home. It has already become a tradition to welcome guests at home by serving a hot miners’ cake. The women of Rude are the guardians of the tradition and preparation of this tasty cake, by passing on the skill of preparation to their daughters, rarely their daughters-in-law.

Greblica is an inevitable part of the menus of all feasts of this region, as well as celebrations and events in the city of Samobor and Zagreb County. By organising the Days of the Miners’ Cake, KUD Oštrc contributes to the promotion and transfer of knowledge and visibility of this intangible cultural tradition which is the successor of the rich mining heritage. The activities organised by KUD Oštrc are as follows:

· Announcing the event though the web page www.ostrc.hr/rudarska_greblica

· Producing roll-up banners in 3 languages (CRO, END and SLO) with visual recipes for making the cake

· By awarding valuable prizes, KUD Oštrc additionally motivates local people to prepare rudarska greblica by themselves and to take part in the competition for the best cake that takes place on the first Sunday in July. After the selection, the cake is shared with the visitors.

3. Workshop on making the Miners’ Cake

The workshops are held for primary school pupils in Rude. After listening to a 45-minute presentation, the students have the opportunity to prepare rudarska greblica at the Nikl Bakery. The experts from the host bakery supervise the students’ work. Rudarska greblica is then baked in either the bakery or hearth oven near the mine.

Additionally, two more workshops are organised during the Days of the Miners’ Cake dedicated to the preparation of cakes for the youngest. The workshops are organised under the title “I Like Greblica More Than Pizza” in the Izvor Kindergarten and Children’s Section of the Samobor Library. Kids’ Greblica event is organised in front of the mine and includes performances by children’s folklore ensembles, theatre groups and many interactive games.

4. Protection of the Miners’ Cake by a Geographical Indication sign in 2016

KUD Oštrc in collaboration with the Rudarska Greblica Association initiated the process of protection of rudarska greblica at EU level by means of the Geographical Indication sign. After the protection was granted at national level in 2017, we expect to be granted permanent protection at EU level in 2019.

5. Integration of the cake with the local cultural heritage

Hand in hand with the promotion of this traditional cake, we also initiated the process of valorisation and protection of the mine, which by 1950 had around twenty shafts. However, the exploitation of the mine stopped, due to unprofitability in 1956. The best-known shafts called Sveto Trojstvo and Kokel that still bear the common name of the St Barbara Mine were entered in the Registry of Cultural Goods of the Republic of Croatia as immovable cultural goods in 2018.

The restoration of the mines started in 2007 with the help of the EU. A mining and botanical educational trail was established, as well as a collection of minerals in the Rude primary school. Many works were performed underground, lighting was installed and ventilation enabled, which made 350m of the mine available to public. The area in the front of the mine was adapted and improved, which resulted in the official opening of the St Barbara Mine to the public in 2012. This served as an important motivational factor to start with the revitalisation of many other segments of the cultural heritage. A geological column was made, clearly showing the geological layers of the mine. In front of the entrance to the shaft, a hearth oven was built. The miners’ uniform was recreated, as well as the miners’ dances. A building permit has been obtained required for the construction of the miners’ house, which should serve as a centre for the protection of the miners’ heritage and include a space for the preparation of rudarska greblica. The members of KUD Oštrc hope that they would ensure funding for the realisation of these projects, with the support of the Ministry of Culture and the City of Samobor.

The biggest obstacles we faced were related to funding and providing sufficient funds required to ensure the recognisability of rudarska greblica. However, with the help of the Ministry of Culture, donations from the public and social sectors, as well as from our own funds, we managed to complete this cultural project. As a result, an important segment of the cultural heritage and history of this region has been brought closer to both the local community and the interested public.

This initiative primarily contributed to the sustainable preservation of the heritage of this region by raising the awareness of the importance the cultural heritage in the local community and by including the local community in various activities, participants of which are mostly children and young people, by developing activities suitable for transfer of traditional skills and knowledge and by working on the improvement of visibility using the new technologies. The protection of rudarska greblica motivated the members of the association to be involved even more actively in the protection of other cultural goods. Besides the above-mentioned protection of the St Barbara Mine, KUD Oštrc also renewed the traditional watermill in the vicinity of the mine. The mill is now also in the process of preparing for permanent protection. Rudarska greblica serves as a kind of a link between the cultural heritage and the gastronomic offer of the village.

By implementing all the above-mentioned activities, we have learned that involving as many different stakeholders as possible, in particular different age groups, enables the achievement of the set goals related to the sustainable preservation of the cultural goods that future generations will be able to enjoy.

The Association takes care of the St Barbara Mine which is situated in the village of Rude and which has been included in the list of protected intangible cultural goods since April 2018.

Additional information is available at www.rudnik.hr

Financing details
Part of the funding is from a sponsor, and a part from the city and the Ministry of Culture