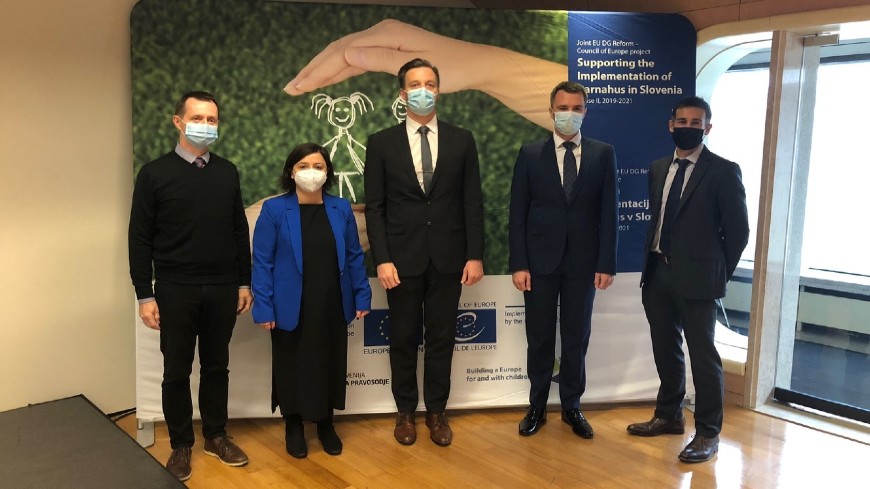 On 17 November 2021, the Steering Committee of the joint EU Reform – Council of Europe project to Support the implementation of Barnahus in Slovenia (phase II) took place in Ljubljana, Slovenia. The Steering Committee members discussed the progress made and results achieved since the last meeting in March 2021. Namely, capacity building for forensic interviewers, a training for trainers for teachers and educators based on the Kiko and the Hand Manual, methodology for the regular evaluation of Barnahus, and development of a child safeguarding policy for Barnahus and a Strategy to consult children and their families on Barnahus matters. The work developed by local experts was also presented, including the progress made regarding the by-laws to complement the Barnahus Law, the child consultations on Barnahus premises, and the Communication Strategy for Barnahus.

In his welcoming remarks, Mr Marjan Dikaučič, Minister of Justice of Slovenia, thanked the Council of Europe for its support and stated that “the comprehensive legal act of Barnahus in Slovenia is the first ever law of its type in Europe and we should be proud of how it will support the protection of children in Slovenia”. Sébastien Renaud, representative of the European Commission’s DG REFORM, concurred by underlining that the Slovenia Barnahus project is a flagship project which should serve as a guidance for many European countries that strive to implement the Barnahus model.

The meeting also served to announce the project extension until May 2022 to cover the period when the Barnahus will be officially opened to public.

Finally, the Steering Committee members, including the minister of Justice, visited the Barnahus premises in Ljubljana, which is currently being refurbished and will start the piloting stage in December 2021 before its official opening in May 2022.