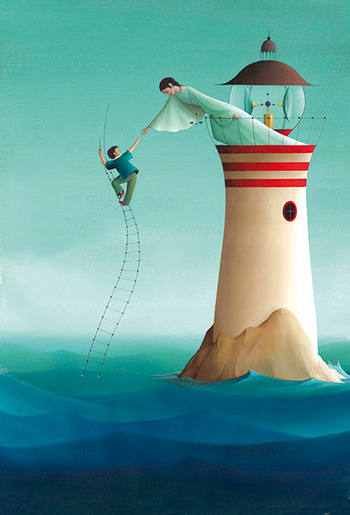 Children come into contact with the justice system in many different ways. This can be for family matters such as divorce or adoption, in administrative justice for nationality or immigration issues or in criminal justice as victims, witnesses or perpetrators of crimes. When faced with the justice system, children are thrown into an intimidating adult world which they cannot understand. Adapting justice to their needs is therefore necessary.

Adapting to the specific needs of children

Child-friendly justice is justice that is:

The Fundamental Rights Agency of the European Union (FRA) has produced a series of videos in several languages explaining some of the key elements surrounding the topic of children and justice.

I. Guidelines on child-friendly justice

The Council of Europe guidelines on child-friendly justice were created by a group of specialists after an extensive consultation with almost 3800 children throughout Europe. The final result is a set of guidelines that are intended to enhance children’s access to and their treatment in justice. These guidelines set out basic rules for European states to follow when adapting their justice systems to the specific needs of children. They apply to all circumstances in which children are likely, on any ground and in any capacity, to be in contact with the criminal, civil or administrative justice system.

A practical tool for reform

The guidelines are a practical tool based on existing international and European standards which governments are encouraged to use as a basis for their law reform in the area of child-friendly justice. The guidelines promote the principles of the best interests of the child, care and respect, participation, equal treatment and the rule of law. They also encourage the development of multidisciplinary approaches and training and require states to provide safeguards at all stages of proceedings.

The European Committee on Legal Co-operation (CDCJ) promotes and supports the implementation of the guidelines on child-friendly justice by providing legislative advice, training and awareness-raising activities on the integration of a child-friendly perspective into the administration of justice. The CDCJ has a regional approach to promoting the guidelines and organises conferences for member states with similar judicial systems to enable them to share good practices in the area of child-friendly justice.

Group of Specialists on Child-friendly Justice

Meeting reports of the group of specialists

Questionnaire for children and young people on child-friendly justice

The European Committee on Legal Co-operation (CDCJ) is responsible for supporting the implementation of the guidelines on child-friendly justice.

For this purpose the CDCJ has developed a document that illustrates general orientations for its activities to promote the guidelines. Regional activities, training for justice professionals and awareness raising amongst children and civil society form an integral part of the proposed actions. The CDCJ will also carry out data collection and research to extend the studies conducted by the European Commission in the 28 EU member states to children’s involvement in judicial proceedings in other member states of the Council of Europe (non- EU countries). The outcome of such studies will provide guidance to member states on gaps in laws and practice that need to be addressed.

The CDCJ in co-operation with national institutions intends to develop a series of national protocols and guidelines for all professionals working with children in justice systems.

The Commissioner conducts country visits and engages in dialogue with national authorities to draw attention to human rights violations and to encourage improved human rights protection. He has on various occasions drawn attention to the issue of juvenile justice and has visited detention centres with the aim of encouraging reform.

The CPT consists of independent experts from each member state who are elected to work in their individual capacity. The committee works to prevent ill-treatment of persons deprived of their liberty in Europe. To this aim they conduct visits to detention centres in member states, including juvenile detention centres. The annual general reports of the CPT always include a special section dedicated to the situation of juveniles in detention.

Council of Europe Commission for the Efficiency of Justice Systems (CEPEJ)

CEPEJ is composed of experts from all 47 member states of the Council of Europe. The commissions’ objective is to promote the rule of law and the protection of fundamental rights in Europe. It works to improve the functioning and efficiency of justice systems. To this aim it undertakes data collection and monitoring. A special part of the monitoring process focuses on the treatment of juveniles in the justice system. The results are published in an evaluation report on a bi-annual basis. The latest report revealed that many member states are, in fact, engaging in a review of their legal systems in order to render them more child-friendly.

The CDCJ is an intergovernmental body which promotes standard setting in the field of public and private law. The committee’s work on standard setting in the field of children’s rights culminated in the adoption of the guidelines on child-friendly justice, which were adopted in 2010. The CDCJ has a regional approach to promoting the guidelines and organises conferences for member states with similar judicial systems to enable them to share good practices in the area of child-friendly justice.

The PC-CP follows the developments in national policies and practices in the field of execution of penal sanctions and measures in the Council of Europe member states. The PC-CP has drafted several recommendations on juvenile justice, including the European Rules for juvenile offenders subject to sanctions or measures. The PC-CP also developed a report on violence in institutions for juvenile offenders which revealed that issues such as abuse of power and excessive use of force by staff in juvenile institutions are still prevalent problems in member states.

The European Court of Human Rights (the Court) is often confronted with cases concerning juveniles in the justice system. Its judgments are binding on the states concerned. Although the Convention does not contain any explicit mention of children in its text, the rights contained therein apply equally to children as to adults.

In two judgments of 16 December 1999, the Court concluded that “it is essential that a child charged with an offence is dealt with in a manner which takes full account of his age, level of maturity and intellectual and emotional capacities, and that steps are taken to promote his ability to understand and participate in the proceedings.” These were the first steps towards an increased awareness of the need for a justice system adapted to children.

The Court has increased the standards of protection guaranteed in the Convention when ruling in cases concerning juveniles. This is especially true in respect of detention. The Court has taken the approach that the standards for demonstrating the need for detention in accordance with Article 5 are higher than when adults are concerned and that detaining children in pre-trial detention should be a measure of last resort and be as short as possible.

The European Court of Human Rights has developed much case law which confirms and reinforces the importance of respect for the specific situation of children. With regard to juvenile justice the courts are required to take the child‘s age, level of maturity and the intellectual and emotional capacities of the child into consideration. This includes the requirement that courts must always promote the child‘s ability to participate in the proceedings (Adamkieuwicz v. Poland).

The fact that the applicant in a case before the Court is a minor, influences the Court heavily in its application of the Convention rights. The standards of protection required are increased considerably when a minor is involved.

This is especially true with respect to detention: the standards for demonstrating the need for detention in accordance with Article 5 are higher than when adults are concerned. The Court has confirmed that pre-trial detention of minors should only be used as a measure of last resort and be as short as possible. However, when detention is strictly necessary, minors should always be kept apart from adults (Nart v. Turkey).

The Court also has particular regard to the vulnerability of children when determining whether treatment qualifies as inhuman or degrading treatment (Dushka v. Ukraine).

The CDCJ regularly takes stock of recent judgments of the European Court of Human Rights in which the child-friendly justice guidelines are cited.

The international co-operation that takes place at the Council of Europe is through the Committee of Ministers and the Parliamentary Assembly. The Committee of Ministers and the Parliamentary Assembly serve as the guardians of the values for which the Council of Europe exists. They adopt recommendations on common policies that the member states are urged to follow. Although these instruments are not legally binding they serve as an indication to member states of how they should further develop their national policies to enhance the protection of human rights, democracy and the rule of law.

The following standards and recommendations include a focus on child-friendly justice:

In November 2010, the Council of Europe adopted the guidelines on child-friendly justice intended to enhance children’s access to and treatment in justice. These guidelines apply to all circumstances in which children are likely, on any ground and in any capacity, to be in contact with the criminal, civil or administrative justice system.

The European Rules for juvenile offenders subject to sanctions or measures were drafted by the PC-CP in 2008 and adopted by the Committee of Ministers in November that year.

The rules apply to all juveniles who are deprived of their liberty irrespective of in which setting the detention takes place, and they regulate in detail the conditions which must apply when juveniles are kept in detention.

It is estimated that more than 2 million children in Europe have a parent in prison. This is a huge number which exceeds or equals the population of some of the European states. The majority of these children face emotional and material difficulties and many are subjected to psychological stress and stigmatisation, but they and their traumas remain largely hidden from the public attention.

This resolution calls on states to bring their law and practice into conformity with the existing human rights standards in this area. A few key recommendations included the recommendation to set the minimum age of criminal responsibility at at least 14 years of age and that states should establish a maximum period of detention to which a child may be sentenced. The resolution also urges states to decriminalise status offences.

This regional activity is undertaken in close collaboration with the Council of Baltic Sea States. The objective is to facilitate an exchange of best practices and recent initiatives in the region on all aspects of handling evidence taken from children in legal proceedings.

Conference on Handling Child Evidence within the Framework of a Child-friendly Justice System (Tallinn, Estonia, 19-20 February 2015)

Protecting children against torture in detention: global solutions for a global problem (2017)

The rights of children in Biomedicine (2017): study prepared by researchers from Uppsala University Department of Law (Sweden) on the challenges posed to the rights of the child by scientific and technological developments in biomedicine

European Committee for the Prevention of Torture, 24th General Report of the CPT (2014)

PC-CP, Draft Report on Violence in Institutions for Juvenile Offenders (2014)

“Child-Friendly Justice: What it Means and How It Is Realized”

Nils Muižnieks, Council of Europe Commissioner for Human Rights at the conference on the occasion of the 25th anniversary of the adoption of the Convention on the Rights of the Child (Stockholm, Sweden, 16 May 2014). Speech: CommDH/Speech(2014)7: Keynote speech on child-friendly justice

“Children and prisons: what can we do better?”, Janusz Korczak Lecture

Thomas Hammerberg, former Council of Europe Commissioner for Human Rights organised the lecture which was given by Maud de Boer-Buquicchio, former deputy Secretary General of the Council of Europe (Tromsø, 18 June 2009). CommDH/Speech(2009)45