PACE delegation, ending Kyiv visit: ‘The worst crime of all is the war itself' 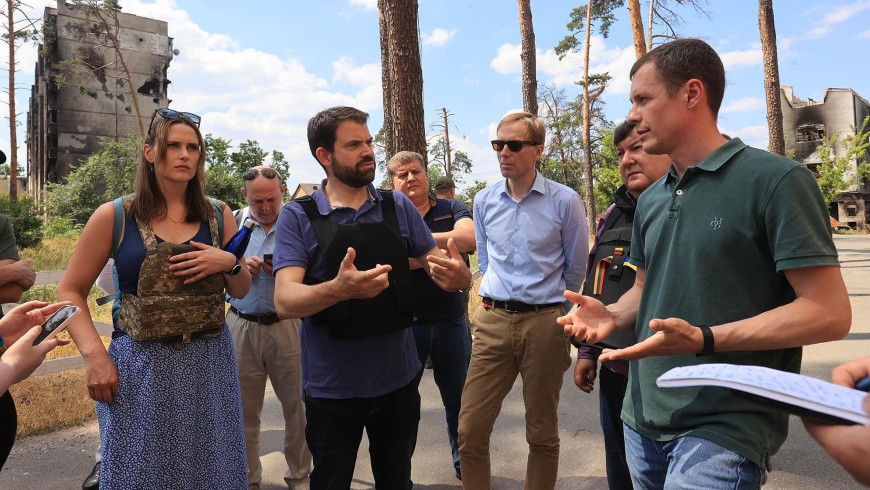 A cross-party delegation of 10 members of the Parliamentary Assembly of the Council of Europe (PACE),* ending a visit to Kyiv on Ukraine’s Constitution Day (28 June 2022), has expressed shock at the level of evidence of war crimes and crimes against humanity it saw, denounced the war in the strongest terms, and pledged determination to fight impunity and achieve just compensation for Ukraine.

“We were shocked by what we saw and heard in Bucha and Irpin,” the sub-committee of PACE’s Committee on Legal Affairs and Human Rights concluded. “We saw clear indications that Bucha really was the theatre of cold-blooded murder of civilians on a massive scale. The destruction in Irpin brought home the sheer brutality of Russia’s aggression against Ukraine and the enormity of the task of reconstruction. During our visit, Ukraine was once again hit by a missile strike on a civilian target, this time a shopping mall in Kremenchuk in central Ukraine. We express our heartfelt condolences to the relatives and friends of the victims.”

The members of the delegation added: “We were impressed by the courage of the many Ukrainians from all walks of life that we met, and their determination to hold the perpetrators of war crimes and crimes against humanity to account. The worst crime of all is the war itself, the groundless and brutal aggression against a peaceful neighbour that is a clear and grave breach of international law.”

“We heard from many of our interlocutors that one priority shall be the establishment of an ad hoc international tribunal to prosecute the crime of aggression, as proposed by the Assembly in April. The second priority is the establishment of a compensation commission empowered to seize certain Russian assets for funding the reconstruction of Ukraine. Last but not least, through joint efforts of Ukrainian and international investigators and prosecutors, individual perpetrators of war crimes and crimes against humanity shall be prosecuted and punished in accordance with the law. Special attention must be given to punishing widespread sexual violence, despite the difficulties of collecting and preserving evidence,” the parliamentarians said.

“We are determined to contribute to the fight against impunity and achieving just compensation, in our work back home,” they concluded. As well as visiting Bucha and Irpin, the delegation met with senior representatives of the Verkhovna Rada, the Ministries of Foreign Affairs and Justice and the Prosecutor General, as well as representatives of leading NGOs.