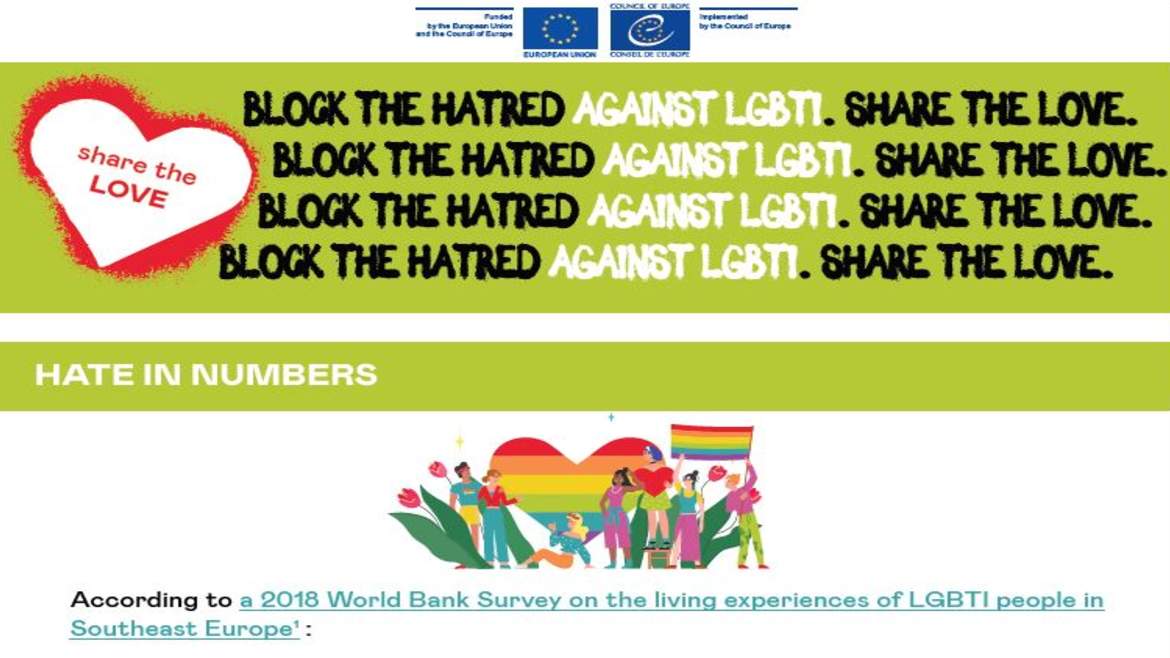 The “Block the hatred. Share the love!” regional campaign aimed to address the phenomenon of hate speech, thus raise awareness among the general public about the imminent danger of hate speech and its negative effects in the Western Balkans societies moves forward. This week, the campaign gets closer to the followers and enables them to find out more about existing hate speech patterns in the region, as well as more about certain social groups that are particularly vulnerable to hate speech.

The newly released series of factsheets identify the most common forms of hate in the region. Each factsheet provides statistics of groups and individuals affected; it highlights persisting challenges and good practices, including references to relevant and applicable European standards; and provides hints on the ways forward.

Some examples of issues addressed in the factsheets: do you know that hate towards and among certain groups of youngsters is quite widespread in the Western Balkans? This is called bullying, which nowadays is usually happening online and is complex to counter. Both kids who are bullied and who bully others may have serious, lasting problems, as an academic article found out. Every and each one of us can do better and convey messages of tolerance and respect that will provide counter narratives to hate speech, as well as try to encourage victims to report hate incidents to competent authorities.

Are you aware that hate crimes and hate speech against LGBTI persons are one of the most prevalent forms of hatred across the region? You can read more about in one of our factsheets provided in the link bellow, where you can also find out good examples how to ensure non-aggressive yet effective communication on the topics related to sexual orientation, gender identity and sex characteristics.

Beside hate against LGBTI persons and youngsters, factsheets will help identifying facts and figures on the following recurrent forms of hatred targeting vulnerable group in the region: against the Roma community, religious groups, persons with disabilities, migrants, women and girls.