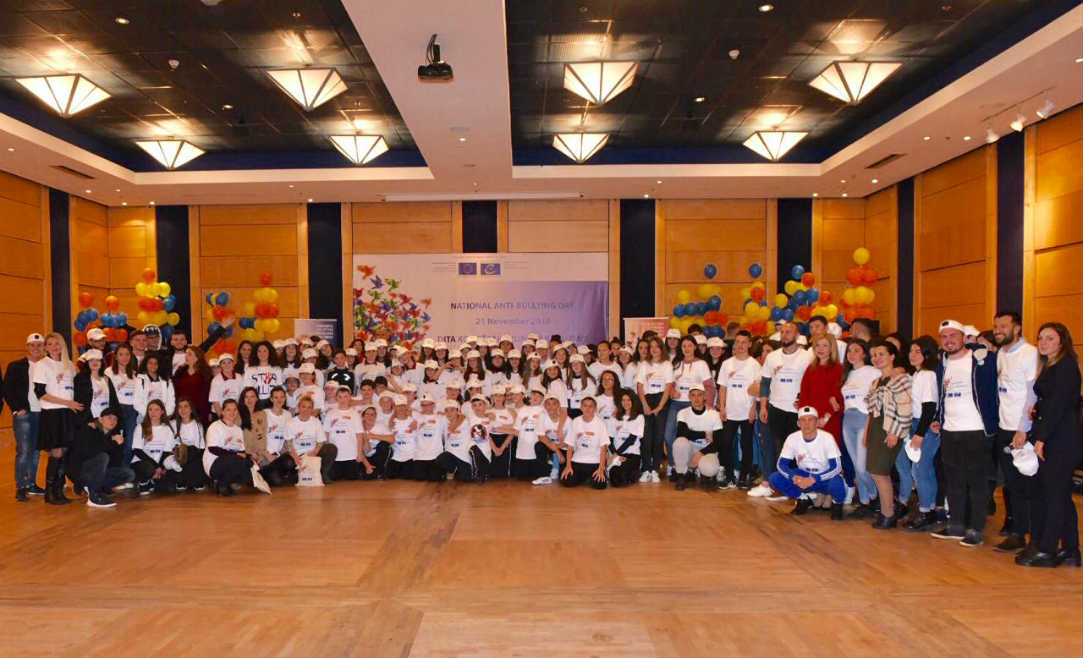 On 21 November 2018, the National Anti – Bullying Day was organised for the first time in Albania. On this occasion, the Council of Europe and the European Union in cooperation with the Ministry of Education, Youth and Sport (MoEYS) organised a series of awareness raising events throughout the country involving 21 pilot schools of the joint EU/CoE Horizontal Facility Action “Fighting Bullying and Extremism in the Education System in Albania”.

In Tirana, five pilot schools of the Action joined efforts to organize a common programme with the participation of 250 students and teachers who said “NO TO BULLYING”. The event was welcomed by Olsi Dekovi, the Acting Head of Council of Europe Office in Tirana, and Tatjana Vuçani, MoEYS representative who emphasized the importance of building an inclusive, safe and democratic school culture where diversity is respected, appreciated and celebrated. The programme was designed around the messages of peace, tolerance, unity and respect for diversity as a means to prevent and reduce the bullying phenomenon in schools.

The event culminated with the establishment of the “Garden of Friendship” within the Great Park of Tirana, where students planted 21 trees in symbol of the day and the work of 21 pilot schools involved in the project.

In addition, multiple awareness raising events were organised in the 21 pilot schools and their communities throughout the country in Dibra, Kukës, Lezha, Durrës, Shkodra, Tirana, Elbasan, Gjirokastra, Vlora, Fier, Berat and Korça. The events gathered school children, teachers, parents, other schools and community representatives to spread the general message that bullying and extremist behaviours are not tolerated among school peers. Information sessions with teachers, students and parents, class activities, screening of anti-bullying movies, discussions with the local media, open debates, comedy sketches, artistic shows and performances were some of the activities organised simultaneously in the 21 participating schools. The events were closely followed and reported by the main media channels in Albania.