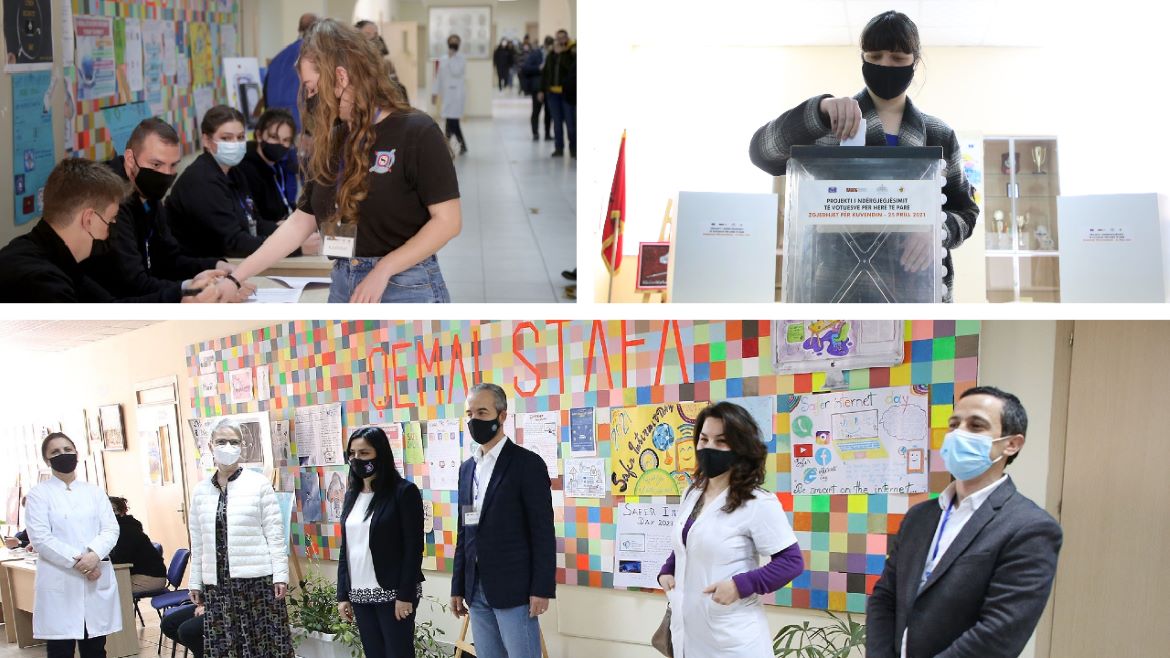 Around 107 thousand youngsters will vote for the first time in the 25 April elections for the parliament of Albania. To inform first-time voters about the electoral process and to encourage their participation in elections, the Council of Europe has supported an education programme in all public high schools in the country. The programme is implemented by the Academy of Political Studies, in close cooperation with the Central Election Commission and the Ministry of Education, Sports and Youth.

In the framework of this programme, the Head of the Council of Europe office in Tirana, Jutta Gützkow, and the State Commissioner, Ilirjan Celibashi, closely followed today the voting exercise of the graduates of "Qemal Stafa" high school in Tirana.

In her speech Ms Gützkow underlined that the right of free elections in part of the human rights and fundamental freedoms protected by the European Convention on Human Rights. She invited the youngsters to - “...make use of your right to vote, go to vote on Sunday, make your voice heard and have your say in the composition of the next parliament.”

Mr Celibashi stressed the importance of education and awareness of graduates who vote for the first time in these elections. "I hope that you will pass on the knowledge gained during the programme to your family and friends outside of school. I would like to invite you once again to exercise this right and the opportunity that has been offered to you to decide on your future", said the Commissioner.

He also thanked the Council of Europe, the Academy of Political Studies and the Ministry of Education, Sports and Youth for the cooperation that made possible, even in this pandemic situation, the implementation of the information programme for graduates voting for the first time.

The Director of the Academy of Political Studies, Erjon Tase, said “Today, we are finalising the programme of education and practical voting exercise for about 35 thousand graduates in all schools of the country. We are pleased to see an increased awareness and interest among youngsters, even in the most remote areas, towards the innovations of the electoral system and the preferential vote."

Then, the guests followed the students, first-time voters, who organised a simulated voting process in their classroom for three candidates and took on relevant roles as candidates, commissioners, observers, etc. This exercise aimed at practicing with them the voting procedure to avoid possible irregularities on election day.