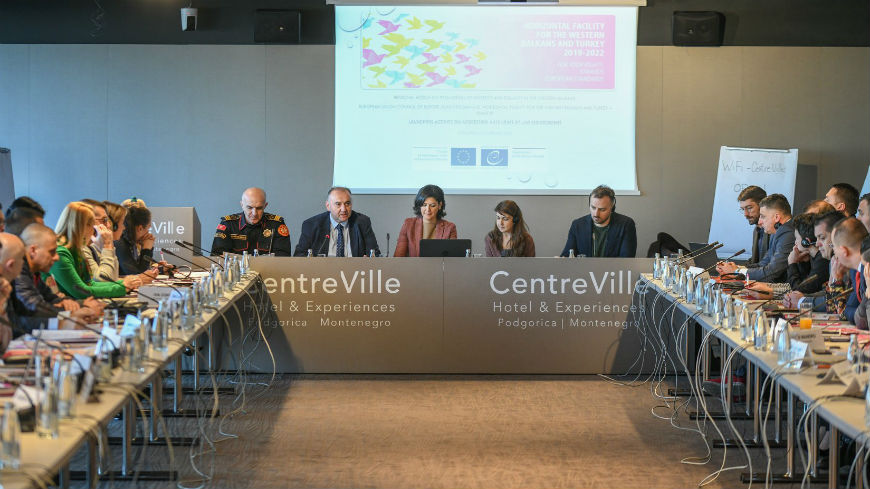 The launching activity of the regional component of “Promotion of equality and diversity in the Western Balkans” action to combat hate crimes, took place in Podgorica 18-20 February 2020.

Twenty representatives from six police administrations, as well as 15 non-governmental organisations' (NGOs) representatives active in defending the rights of LGBTI people in the Western Balkan participated at two-day training. The training was based on the Council of Europe’s Manual developed by the Sexual Orientation and Gender Identity Unit and facilitated by CoE staff and pool of trainers. The training included an exchange of experiences, share of best practice, lessons learned and discussion on the ways forward. In order to learn more about successful models in addressing hate crimes against LGBTI people, participants agreed to move forward with peer to peer exchanges and study visits that would enable them to better protect the rights of LGBTI people in future.

The regional component of the action “Promotion of equality and diversity in the Western Balkans” aims at improving the anti-discrimination record of the Western Balkan Beneficiaries, in line with the relevant recommendations on combating homophobic and transphobic crimes in individual countries’ reports of the European Commission against Racism and Intolerance.

In his opening speech, Sinisa Bjekovic, Ombudsman of Montenegro and ECRI national member, reminded the participants of the close link between the activities implemented in the context of the action and the ECRI monitoring mechanisms. Nikola Janusevic, Deputy Head of the Police Directorate of Montenegro, re-called the successful co-operation and fruitful dialogue established between Police and LGBTI NGOs in the country.

Plamena Halacheva, Head of Political Section in the EUD to Montenegro, reiterated the importance of this activity in the context of EU accession negotiations. Finally, Amarildo Fecanij, Co-Director of the regional LGBTI umbrella association ERA, underlined the importance of reinforcing the co-operation between NGOs and the Police in the Western Balkans, and welcomed the initiative of EU and Council of Europe to support the rights of LGBTI people in the region.