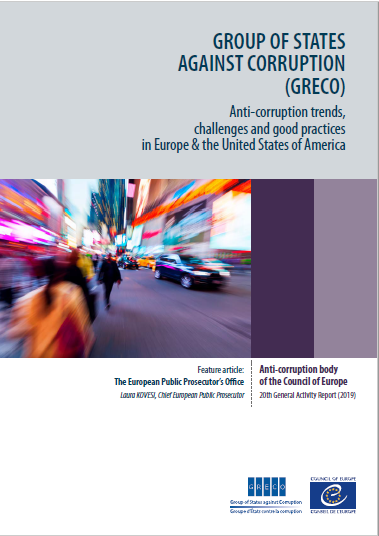 The 20th General Activity Report reviews the measures to prevent corruption taken in GRECO’s member states in 2019 in respect of parliamentarians, judges and prosecutors, as well as in central governments – including top executive functions - and law enforcement agencies. GRECO’s 20th Anniversary has marked the consecration of its expertise in the field of the fight against corruption, gained over the years.

Secretary General Marija Pejčinović Burić stated: “Corruption undermines citizens’ trust in democracy and in democratic institutions. Implementing effective anti-corruption measures and promoting integrity and transparency should therefore be a priority for public authorities at all times. States have made progress, but they should step up their efforts to fully implement GRECO´s recommendations”.

The report focuses mainly on the 4th evaluation round (since 2012, nearly half of GRECO’s member states have carried out constitutional reforms following its recommendations) and on the 5th evaluation round (18 countries evaluated by the end of 2019, highlighting for example shortcomings in the way countries dealt with lobbying, conflicts of interest and “revolving doors” in central governments ; and concerning law enforcement agencies, themes such as codes of conduct, conflicts of interest, protection of whistleblowers etc.).

Some member States are subject to GRECO’s 4th round non-compliance procedure ; a new advisory function has been added to GRECO’s mandate during the 20th anniversary high-level conference. This year, the feature article has been dedicated to the European Public Prosecutor Office. 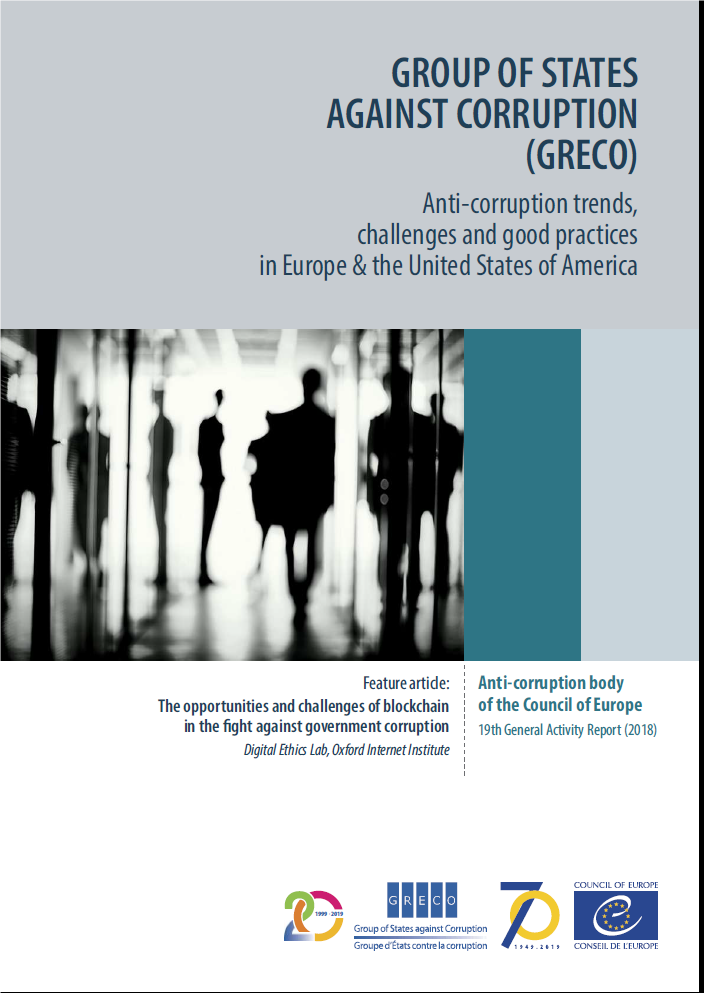 In its annual report, GRECO reviews action taken by its 49 member states against corruption in 2018, notably in respect of MPs, judges and prosecutors, as well as its most recent evaluation round focusing on preventing corruption in central governments and law enforcement agencies.

Council of Europe Secretary General Thorbjørn Jagland said: “Corruption has devastating consequences for human rights, democracy and the rule of law. Overall our member states have made progress to put in place measures to prevent and combat corruption, but much more needs to be done. GRECO´s recommendations are not optional. Governments, parliamentarians and other national authorities should show their commitment to fighting corruption by fully implementing GRECO´s recommendations”. 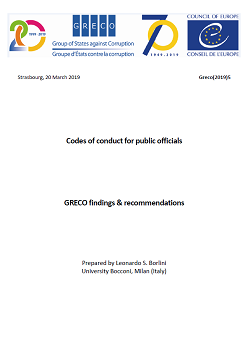 The information and opinions presented in the present report are entirely those of the author alone and no endorsement by the GRECO, its Secretariat or any member of the Council of Europe or one of its bodies is expressed or implied. 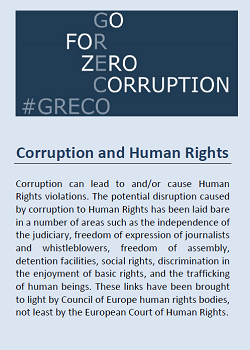 Corruption can lead to and/or cause Human Rights violations. The potential disruption caused by corruption to Human Rights has been laid bare in a a number of areas such as the independence of the judiciary, freedom of expression of journalists and whistleblowers, freedom of assembly, detention facilities, social rights, discrimination in the enjoyment of basic rights, and the trafficking of human beings. These links have been brought to light by Council of Europe human rights bodies, not least by the European Court of Human Rights. Read more 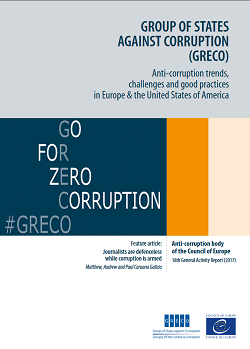 It deals with Anti-corruption trends, challenges and good practices in Europe and the United States of America.

It includes a feature article: "Journalists are defenceless while corruption is armed" by Matthew, Andrew and Paul Caruana Galizia. 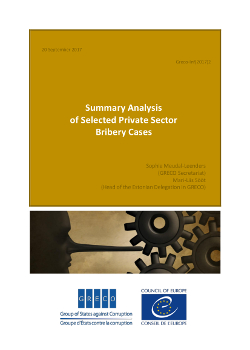 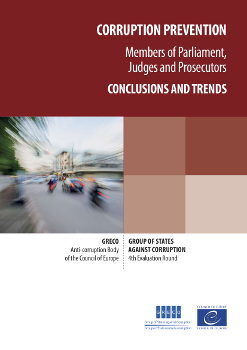 Report on Trends and Conclusions of Fourth Evaluation Round in the field of Corruption Prevention of MPs, Judges and Prosecutors

On the occasion of the 20th Anniversary of the 20 Guiding Principles for the Fight against Corruption, GRECO has published this study on “Corruption Prevention of Members of Parliament, Judges and Prosecutors (Fourth Evaluation Round) – Conclusions and Trends”.

The Report was officially presented at a Conference on “Lessons learned from GRECO’s Fourth Evaluation Round” (under the motto Go for Zero Corruption”), which was held in Prague on 9-10 November 2017. 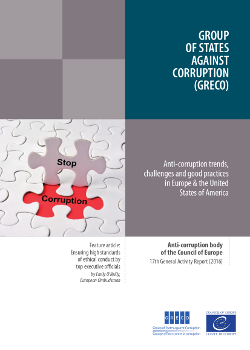 The Group of States against Corruption of the Council of Europe (GRECO) has called on European governments, parliaments and judicial governing bodies to step up their efforts to create more effective preventive mechanisms against corruption.

In its current annual report, GRECO provides a review of its 49 member states action against corruption in 2016, and points out that countries too often over-rely on the repressive aspects of fighting corruption and underestimate the effectiveness of preventive mechanisms, which often do not exist or are too weak.

Secretary General Thorbjørn Jagland said: “Corruption is a major source of dissatisfaction and loss of trust in politics and democratic institutions. It is crucial that states have the right legislation and resources not only to investigate and punish corruption offences, but also to prevent them. There can be no tolerance for corruption, wherever it occurs.” 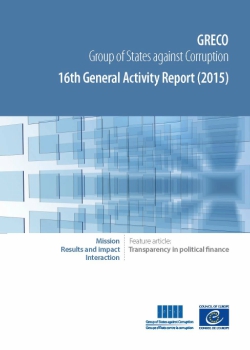 This report records the principal elements of our work at the end of a very demanding year. The need to reassure the citizens of our member States and build up – sometimes even recast – confidence in national institutions, systems and decision makers has seemed particularly pressing in recent times.

Marin MRČELA, Justice at the Supreme Court of Croatia, President of GRECO 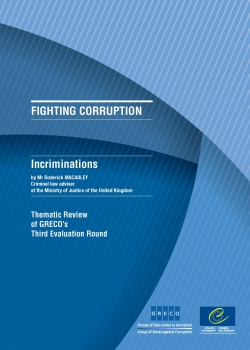 As a first proposition GRECO Round III evaluation reports disclose  a  generally  good  standard  of  compliance  with  the  obligations laid down in ETS No. 173 and No. 191. The GRECO evaluation teams (“GET”) discovered a very high degree of conformity with those obligations in the laws of Hungary, Malta, and Norway, for example. The reports do not pass judgment on the choice of model of criminal law unless it has a direct impact on the suitability of the law to equip the authorities to tackle corruption. 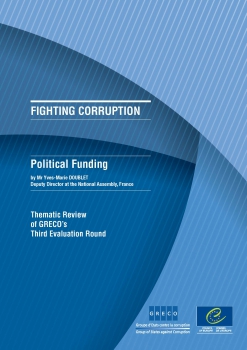 By 1 November 2011, in its third evaluation round focusing on the transparency of political party funding, the Group of States against Corruption, established by the Council of Europe, had examined the legislation of 39 of the Group’s 49 member states. The data collected by the GRECO evaluation teams (GET), which had hitherto been the preserve of academics, are first of all a unique source of information on what is a fairly recent body of regulations in the history of European democracies. 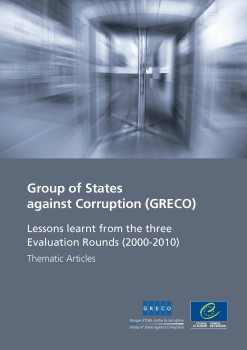 On 1 January 2012, the Group of States against Corruption (GRECO), an enlarged agreement within the Council of Europe, will officially enter into its Fourth Round of mutual evaluations. The three evaluation rounds conducted between 2000 and 2011 assessed GRECO member States’ compliance with selected provisions from key Council of Europe legal texts, namely Resolution (97) 24 of the Committee of Ministers on the Twenty Guiding Principles for the fight against corruption, the Criminal Law Convention on Corruption (ETS 173), and Recommendation Rec(2003)4 of the Committee of Ministers on common rules against corruption in the funding of political parties and electoral campaigns.