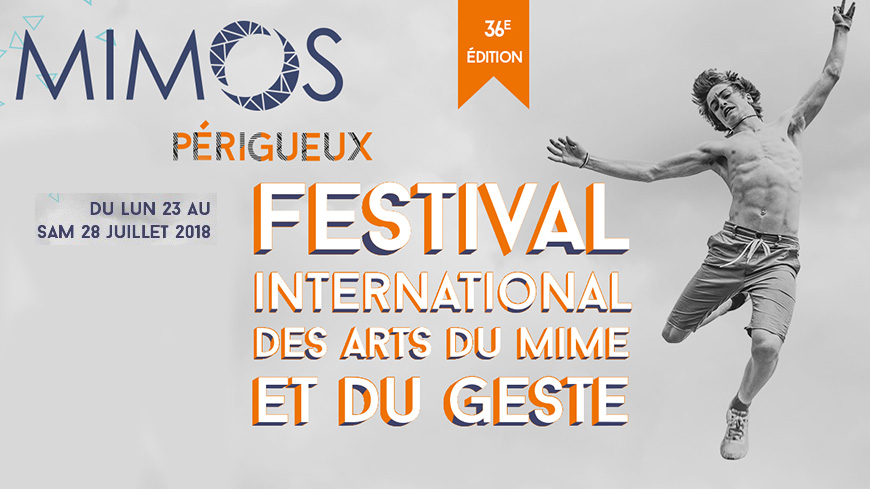 Each year in the heart of summer the Mimos festival plays out in the streets, parks, gardens, public buildings and theatres of Périgueux.

Founded in 1983 in honour of Marcel Marceau, the Mimos festival reflects all the diversity of an art form based on the body in motion: mime, gesture, performance, dance, circus, theatre using objects, puppets, etc.

MIMOS is one of the largest festivals of the Arts of Mime and Gesture in Europe (and the only one of its kind in France).

Founded in 1983, the Mimos festival reflects all the diversity of an art form based on the body in motion: mime, gesture, performance, dance, circus, theatre using objects, puppets, etc.

One image may hide another…

In 2018, APPEARANCES is the guiding thread of the 36th Festival. The artists seek to reveal the all-too-complex reality that surrounds us. Appearances are deceptive, illusion is everywhere. Mirages, trompe-l’œil, metamorphoses mislead us and tease our senses. The artists blur the lines, breaking through forms and visual barriers, testing our imagination and troubling our perceptions in order to refuse a world reduced to a single, rational, unbending perspective, when life in fact constantly proves itself to be layered and intertwined, in constant flux. To open up life’s possibilities and scatter emotional bubbles in the wind...

As usual the festival gives pride of place to shows and creative performances, at the same time spotlighting the architectural and landscape heritage of Périgueux, two thousand years of history, the showcase of these modern festivities, in partnership with the municipal Art and History department.

Mimos is also a forum for all kinds of encounters and exchanges, actions in the neighbourhoods, workshops, masterclasses, exhibitions, public participation and so on.

In 2017 the Odyssée theatre in Périgueux became the first theatre to be awarded the “Art and Creation” national interest quality seal by the Ministry of Culture. It supports the creation and dissemination of Mime and Gestural Arts performances and trains would-be performers and young artists.
In 2018 its success was crowned by the creation of “SO MIM” Mime and Gesture resource centre unique in France. The Mimos festival also passes on the historical and aesthetic background of the Arts of Mime and Gesture to future generations.