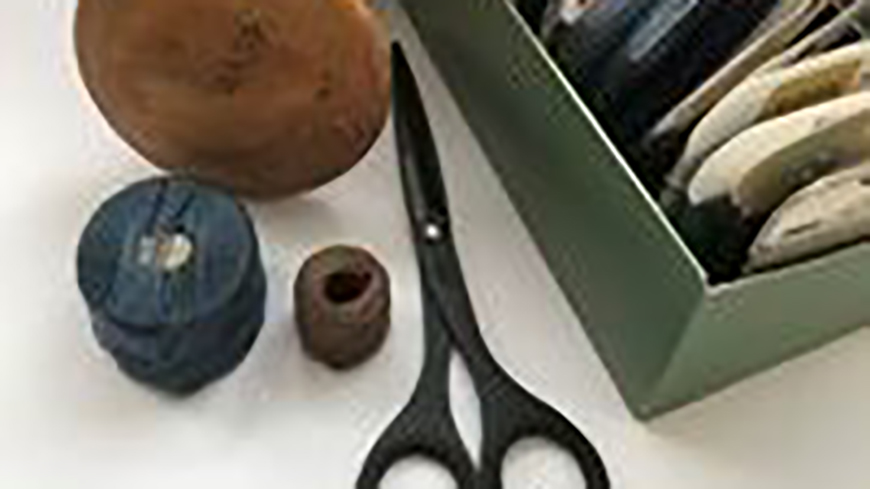 The mending-guild (Fikselauget) is an initiative established to inspire people to mend their clothes to make them last longer, rather than throwing them away. The aim of the initiative is to have a real environmental impact.

The initiative was proposed by Kathrine Gregersen. Having had the idea for a long time, even writing a book about it, she suggested it to her employer, a local branch of the Norwegian Folk Arts and Craft Association in Kristiansand, a city in the southern part of Norway. Sustainability is one of the focus areas of the Association, and Kathrine is member of a task force mandated with developing ideas and activities for a project period over the next four years. The Association endorsed the proposed initiative, which has already been implemented by several local branches.

The Norwegian Folk Arts and Craft Association is a non-governmental organisation with a small administration based in Oslo and consultants employed throughout the country. The organisation, which marks its 110th anniversary in 2020, is constantly developing and as such keeping folk art and crafts vital. With over 24 000 members, it is the main organisation in Norway working to promote crafts locally and nationally, to improve the awareness and the quality of folk art and crafts.

The organisation arranges hundreds of courses and seminars every year, and a range of other activities to pass on the skills of various traditional handicrafts. Most of these activities are based on voluntary work carried out by the members. Amongst the initiatives are courses for children, courses on how to make folk customs (bunad) and woodturning courses. The Red List is another initiative, established to prevent traditional craft techniques from being lost forever. In the name of The Red List, our local branches choose what knowledge is important in their local context and come up with measures for education in and communication of these skills.

The idea behind the mending-guild was to provide people with the tools and training necessary to mend their own clothes. With a pool of skilled volunteers, the local branch of the Norwegian Folk Arts and Craft Association had the capacity to provide such training. In order to get the materials needed, Gregersen contacted the Kristiansand municipality to ask for funding. The response was positive, and the initiative became a reality.

The local branch promoted the initiative locally: they had training and tools for people who wanted to drop in to learn how to mend their clothes. “Nothing fancy, just on a small scale”, according to Gregersen. In addition, they set up courses. The initiative proved a hit. People with lots of experience trained people with less experience. Older generations were proud to teach their skills to younger generations, and young people – down to the age of 14 – enjoyed learning something new.

The initiative was also posted on Facebook, to reach a wider audience.

The initiative has only just been established, and so far only on a small scale. There have been few obstacles until now. Getting funding for the materials was one issue that needed to be solved – in this case it was provided by the local municipality. Other obstacles could be having skilled trainers and also having access to suitable premises. Another obstacle, or challenge, faced by Gregersen, was the scope of the role as coordinator between the volunteers and the public. This was more time consuming than expected.

The direct result of the initiative is the number of items of clothes that have been mended. This is where the real environmental benefit is, and this is what they record and report to the stakeholders.

However, there are several other results or benefits too:

· You create awareness about sustainability and how you make a difference;

· You increase the engagement of people who want to make a difference;

· You get the attention of – and engage – young people;

· You pass on knowledge and skills (handicrafts);

· These meetings points – and doing handicrafts in general – have great benefits for your health and wellbeing;

· You prove that traditional handicrafts are not just a thing of the past, but very much a thing for the future.

The initiative has been endorsed by other local branches of the Norwegian Folk Arts and Craft Association. The mobilisation campaign on Facebook has inspired many more, including Fashion Revolution – a global movement that sets out to unite people and organisations to work together to transform the fashion industry. The movement wants to raise awareness, not only about sustainable production, but also about sustainable consumerism.

Gregersen claims that the value of the initiative is not just the fact that necessary skills are passed on, but also a more profound understanding of the importance of such skills. These skills used to be vital to people to make the clothes last longer. They then skipped the “consumer generation” who have thrown clothes away rather than mending then. Now these skills have become vital again, in an environmental perspective.

There have been some lessons learned in terms of what you need to implement the project:

· funding for tools and materials;

· the time spent on coordination was more time consuming than expected.

We have also learned that there is a great interest in this initiative: a lot of people want to learn how they can contribute to a more sustainable lifestyle. In addition to the results we achieve in terms of the number of clothes that have been mended, there are a many other benefits too, such as passing on important skills and techniques and creating meeting points between generations. Moreover – and most importantly – we have learned that it is possible to make a difference.