The companions of duty 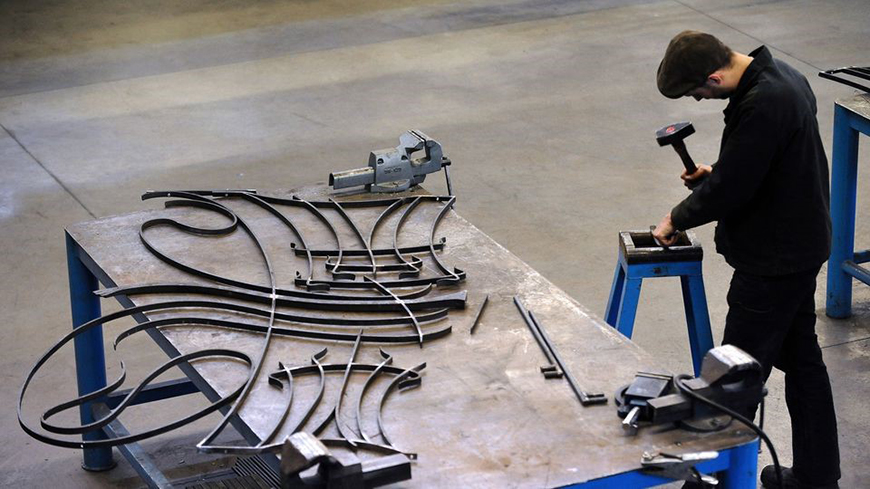 Start Date: The term “compagnonnage” (companionship) made its entry into the French language in 1719, to designate the duration of the apprenticeship a companion had to serve with a master craftsman. The legends of the organisation refer to three legendary founders: King Solomon, Master James (Maître Jacques) and Father Soubise, at the time of the building of Solomon’s Temple, when the order of the Companions is said to have come into being, although the biblical texts describing the event make no mention of it. / End Date: On-going

The Compagnons du Devoir et du Tour de France provide training designed to help apprentices achieve fulfilment “in and through their trades”, thanks to the values they are taught to live by. The companions’ ethic is summed up in the following words: “Ni se servir ni s’asservir, mais servir” (neither self-serving nor subservient be, but serve).

A trade is not just a skill: it is a culture, a way of life. It is also a history, the men who have mastered it, a language, the writings and works left by the forerunners.

Transmission and sharing: the Companion makes it his duty to pass on not only his know-how but also his way of being, because he aspires to be not only a good craftsman but also a “good man”.

The journey or “tour” is a necessary step in the making of a Companion, an opportunity to reconsider oneself, to challenge one’s convictions, but also to learn a new language, a new culture and a new way of working. The Companion moves from town to town, from one job to another, once or twice a year for about three consecutive years, one of which is spent abroad.

They stay at special houses for the Companions which, in addition to food and accommodation, offer them an opportunity to meet men of different origins, trades, cultures, regions and social backgrounds.

A community: to be a member of the Companions of Duty is to be part of a community, a link between different generations, trades and origins which enables everyone to find their path and seek their fulfilment.

Initiation is a time for festive community moments in the young journeyman’s life: Adoption and Reception, ceremonies during which they are reminded of the principles and way of life that are now theirs.

The Reception piece (or “masterpiece”). When the apprentice becomes a Companion his professional skill is put to the test in the production of a Reception work, or masterpiece: the technical accomplishment of the work based on the skills of the trade and the man’s behaviour in the face of difficulty are assessed.

For young trainees under the age of 25, who have completed their secondary education and perhaps earned a general or technical end-of-school diploma, the adventure begins with an apprenticeship to learn a trade and continues with the “journey”, the Tour of France, as an Aspirant then a Companion. For those already in possession of a professional qualification the journey begins with the Tour of France; they become Aspirants a few months after embarking on the Tour.

· The apprentice enters into an apprenticeship for 1 to 3 years, depending on the entry level and the desired diploma in a particular trade. He receives a salary of 50% of the minimum wage and the training alternates between 6 weeks on the job and 2 weeks in the Apprentice Training Centres.

· The Aspirant. Following a special companionship ceremony the apprentice (trained by the Companions or another training body) becomes an Aspirant. He then goes on a Tour of France to perfect his skills, moving from town to town, from job to job, once or twice a year and living in the special housing provided by the Maisons des Compagnons.

· The travelling Companion: having been welcomed by his peers in an induction or “Reception” ceremony, the Aspirant becomes a Companion and continues on his journey in the same conditions as an Aspirant for one or two years, helping to teach the younger trainees in the Companion Houses.

· The sedentary Companion. When a Companion settles down he organises his life as he wishes and he can always count on the AOCDTF for support with his professional projects. He is active in the community and helps to pass on what he has learnt to the younger members.

· 3,500 journeymen, including 415 on the international leg of their journey in 66 countries and territories.

· 90% of the young people find work after completing their training.

After eight centuries of existence the Companionship remains a reference for the excellence of the training provided and the knowledge transmitted. In November 2010 the organisation became part of the intangible cultural heritage of UNESCO as a “network for on-the-job transmission of knowledge and identities”.

The Compagnons du Devoir have always adjusted to the demands of the working world, technological innovations and changing job specifications. They have striven to bring a new dimension to their trades. Their school, the Grande École des hommes de métier en compagnonnage, is there to attract young school leavers to these craft trades and help them obtain new state diplomas (developed in partnership with the Conservatoire national des arts et métiers (CNAM) Arts and Crafts Conservatory, for example, to provide professional qualifications). Lastly, the association was admitted to the Conférence des grandes écoles, marking the official recognition of the human and professional values developed within the Compagnonnage.