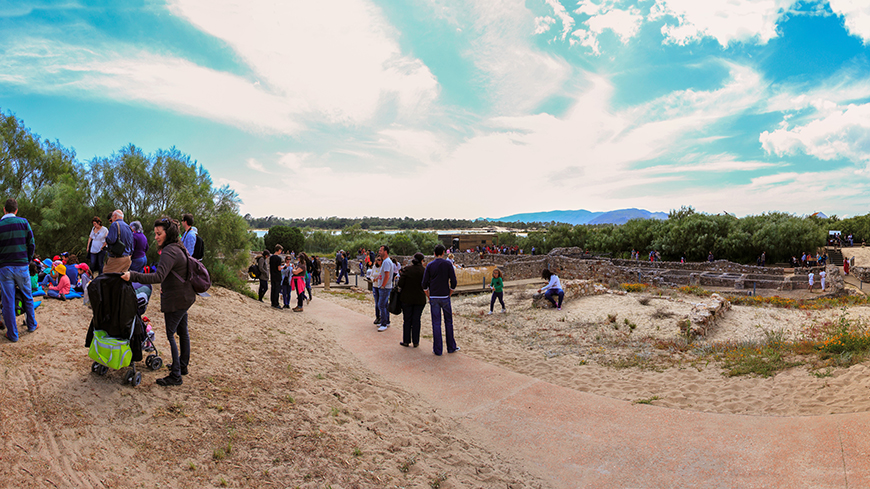 The Roman Ruins of Troia are the only archaeological site and monument in Portugal under Private Management. Troia resort is the owner of the land responsible for the touristic development of the peninsula. Therefore, the company is in charge of the conservation, maintenance and enhancement of the Roman Ruins of Troia with a team of archaeologists to ensure the project.

The Roman Market, with five editions so far, was originally created to develop the attractiveness of the touristic destination with a new cultural offer, different from the beach and sun tourism. At the same time, it aimed to prove the appeal of this type of re-enactment and recreational events which can concentrate a variety of activities (art, talks, dance, theatre, music, artisanal market, children’s playground and ateliers) and may enlarge the audiences of the site, encourage the creation of new jobs and business opportunities, promoting the sustainability of cultural heritage.

Each annual edition had a theme based on scientific research and aimed to transfer that knowledge to support intergenerational and intercultural identification fostering the future preservation of this archaeological heritage.

The engagement of amateur theatre institutions, schools and universities for the activities, the promotion of a contest between local families or the development of the market with artisans have developed new perspectives for heritage, using history to bring people together and to meet their expectations.

The customisation of each annual edition highlighted the cultural value of the largest fish salting production centre of the Roman Empire, guaranteeing the quality of the event and disseminating the Outstanding Universal Value of this archaeological heritage.

Being an open-air museum, the site suffers from the climatic impact of an outdoor event. Therefore, the number of visitors was directly related to the weather forecast.

In addition, the location in a sandy peninsula, only accessible by boat or car, made the event extremely dependent on other entities. There was for instance a strike of the Atlantic Ferries workers during one of the editions that discouraged many visitors, since they had to take the car and travel an additional 100 kms.

The private management of the site and event initiative makes it very difficult to get other private sponsors or to apply for public funding.

The archaeological site does not have electricity, large toilets, or adequate parking and has a dusty road of over 2 kms to access the site. More investment is required to create the right conditions for large crowd events, including buses from different stops to get people to the site, or proper toilets.

This project has promoted the engagement of the surrounding community, resulting in new and autonomous cultural expressions, such as the theme of the annual parade from the local village of Carvalhal, which is part of the traditional “Arraial”, where young children, from the schools that had taken part in the project, chose to dress up as Romans while creating the lyrics to a new song on the Roman past of the region.

The resort was able to confirm the public attractiveness of this type of event and to estimate the media impact. The great number of news items and television programmes in the Resort press clippings favoured a more positive image of the resort within the society and local community.

The event increased the popularity and recognition of Troia Peninsula and provided a sense of awareness for the cultural character of the region.

The most important outcome of the Troia Roman Market was the reconnection of the site with its surrounding communities. This made it possible for students of different ages and from all over the region to participate in activities and re-enactments of the fish-salting industry or Roman daily life at Troia. Being a non-formal education, the site become an interactive and immersive classroom, from where students, in a safe environment, developed a critical sense to a historical background and connected Roman heritage.

Troia Roman Market stablished bridges within the community that gained new skills and a growing interest to learn and to understand the origins of Sado Harbour and the importance of the fish-salting industry throughout the ages.

In addition, the possibility to bring new artists, entertainment and activities allowed the diversification of the cultural offer, almost inexistent in the Peninsula, demonstrating that heritage can provide an inclusive setting for both fun and educational experiences.

The Roman Market expanded the networks of the Roman Ruins of Troia to stakeholders and institutions, and created bonds with scholars, schools and universities, that were able not only to explore Roman history, acquire new training and skills, but also to find sources of inspiration and creativity.

On the other hand, the attraction of the Roman Market increased the dangers and threats of the site, such as human pressure, and was very demanding in terms of human and investment resources. These risk factors require a different management strategy with the division of costs between different partners.