Renewal of cultural heritage with the help of unemployed people 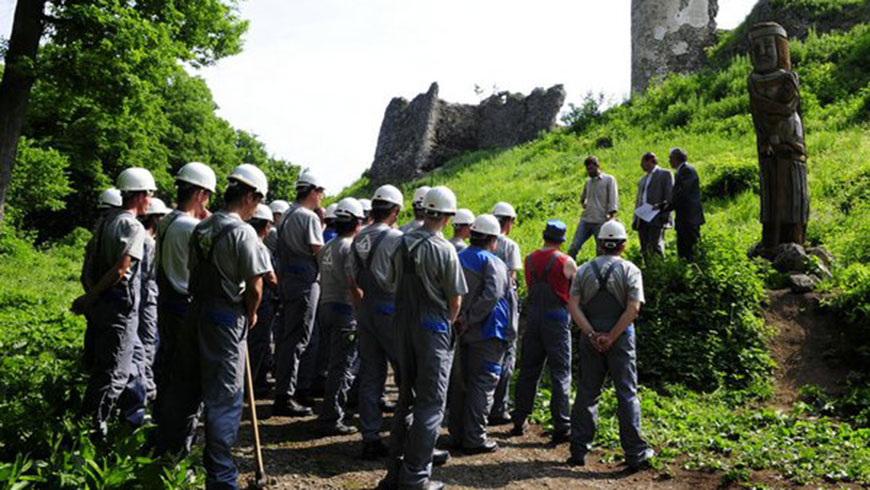 Participation is the key aspect of safeguarding of cultural heritage – the support of community is necessary for preserving cultural heritage – to enforce the relationship, strengthen the feeling of responsibility and awareness of values of cultural heritage (mostly) in local and regional level. In this project, participative governance was chosen in order to involve unemployed people in the renovation and restoration of cultural heritage and to help them gain new skills together with building the relationship to the particular historic site. The initiative started in 2011 as a pilot project “Renewal of castles by unemployed persons” with the conservation of two important Slovak castles – Veľký Šariš and Uhrovec where 50 unemployed people were offered not only a working position for 6 months but also training in specific skills required in renovation of historic objects. Since the pilot project has acquitted well and gained a considerable interest among unemployed candidates and among employers too, the responsible authorities have decided to continue the project and to broaden its scope from castles also to other objects of torsal architecture, manor houses and historic parks. It has become a national project “Engagement of the unemployed in the conservation of cultural heritage” run in cooperation of the Ministry of Culture, Ministry of Social Affairs and employment offices and financed from the financial resources of the European Social Fund and the Financial scheme of the Ministry of Culture of the Slovak Republic, “Let’s renew our house“, subprogramme 1.4.

1. The integration of unemployed citizens as a disadvantaged group back to the working process

2. The systematic maintenance and conservation of castle or torsal architecture

The project “Engagement of the unemployed in the conservation of cultural heritage” during the years 2011 - 2015 involved 123 employers, who together have created 1,763 jobs and work was gradually given to 2,084 unemployed. Upto 86 percent of them were at risk categories, young, long-term unemployed and aged 50 and above. Of which the largest percentage of long-term unemployed accounted for. Within the project about 7,288,000 euros were invested and conservation actions took place at 136 historic objects. This project is a perfect example of the synergy effect of the EU funds and the cooperation of state bodies, NGOs and local governments. However, the most important is the impact on society. On the one hand is helping unemployed citizens to gain new experiences and skills which increase their chance to move permanently to the labor market and give them the opportunity to participate in the valuable work in preserving the heritage of our ancestors. On the other hand, is ensuring of the systematic conservation of castles, especially by volunteer organizations which has had a long-lasting tradition in the Slovak Republic, dating even before 1989. Thanks to this project a wider space was created for self-expression of enthusiasts who are not indifferent to life in their community or region, and they were given proof that authorities appreciate their effort and will to pay good ideas, considerable personal time and actions to preserve the traces and evidence of history.