National day of the traditional costume 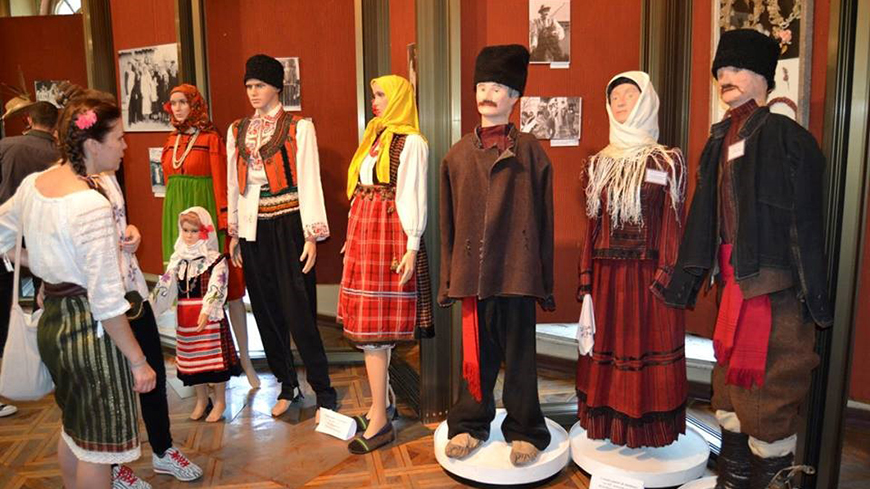 S4 - Promote heritage as a meeting place and vehicle for intercultural dialogue, peace and tolerance

times in the history of our people when a carpet that was passed down from generation to generation was the most precious wealth of a family, it’s nobility crest. Born of art and folk tradition, the fruit of imagination and the skill of craftswomen for which the process was like an incantation, the traditional costume was not just an object, but a letter or a book of their lives and of our common destiny. Undoubtedly, the fate of our people was created just like a traditional costume, piece by piece, from thread, ornaments to fabric. Our grandmothers, our mothers, our sisters sent us through the popular costume the messages of love and wisdom, patience and faith in good.

In our society there is a general tendency to revive the authentic costume in order to actualize and to promote it in a larger context of the local authentic creation. This interest is generated by the people’s need to rediscover their origins and identity. In this way, the authentic traditional costume became a part of the collective memory. In the nowadays social communication, alike several centuries ago, one of the main emphasizes is put on signs and visual images that are endowed with a big potential of carrying significances. The traditional costume is the most expressive mark of the national identity. Knowing the symbols, motives and element of the traditional costume, we learn about the history of our nation and our ancestors.

This craft was considered representative for the majority of localities of Moldova until the beginning of the 20th century. Only during recent years cultural institutions, including the Ministry of Culture / Ministry of Education, Culture and Research, initiated activities aimed at revitalizing the techniques of confectioning the traditional costumes.

In the Soviet period, the traditional costume suffered a lot of changes in order to create an identity that is unique for the Soviet space. The techniques of creation have been uniformed, the cut has changed, but most distortions suffered the size and colour of the ornaments.

Due to the efforts of the Ministry of Culture and local public authorities, The National Day of the Traditional Costume was officially established by the Decision of the Parliament nr. 194 from 19.11.2015. It is organised every year on the last Sunday of June and its main goals are to support the process of the nomination of the „The art of the Romanian blouse – an element of cultural identity in Romania and the Republic of Moldova” for the inclusion on the UNESCO Representative List of the Intangible Cultural Heritage of Humanity and to promote Romanian traditional costume and the traditional costume of different ethnic groups that live in the Republic of Moldova.

Other goals of the project are:

The Ministry of Culture organised the 1st edition of the Romanian Blouse’s Day in 2015 and its main goal was to promote the authentic women’s blouse as a part of the traditional costume. Many other institutions and organisations were interested in establishing a partnership with the central authority in order to celebrate this craft. The National Day of the Traditional Costume was organised in order to display heritage costumes and include them in the cultural circuit, including heritage costumes of different ethnic groups from the Republic of Moldova. The event presented the diversity of the traditional costumes according to some regional particularities. There were heritage exhibitions from the National Museum of Ethnography and Natural History, local museums from the central, southern and northern regions of the Republic of Moldova. An important component of the heritage exhibitions was the presence of the traditional costumes of ethnic groups (Gagauz, Bulgarian, Ukrainian, Belorussian, Roma, Polish etc.). A specific activity was the organisation of several masterclasses on confectioning the women’s blouse, on braiding women’s hair and on making traditional types of beads.

The main event of the project also included presentations from designers’ collections, a fair of traditional craftsmen, on line transmission of local events dedicated to the National Day of the Traditional Costume etc.

More than 20 districts and other localities organised events dedicated to the celebration, according to the concept spread by the Ministry of Culture.

Under the aegis of the Ministry of Culture / Ministry of Education, Culture and Research, activities dedicated to the confectioning, preservation and promotion of the traditional costume are organised every year in Chișinău and in other districts and localities of the country. In this way, we are trying to involve local public authorities in the promotion process of cultural heritage and to encourage local communities to discover their own local history, specific traditions and to participate in its preservation.

During these celebrations, costumes from different historical ages are exposed and promoted, the authentic, original, old ones, but at the same time – replicas made in traditional ways of confectioning.

The main obstacle faced by the organisers was the financial one. Due to a small budget, it was difficult for the local communities to identify and support the local craftsmen. At the same time, we did not have a national register of local craftsmen with details concerning the techniques, ornaments and materials used by them.

The public and civic initiatives demonstrated that there was a need to involve professionals from the Ministry of Culture / Ministry of Education, Culture and Research and subordinated institutions, such as the National Museum of Ethnography and Natural History and National Centre for the Conservation and Promotion of the Intangible Cultural Heritage, in order to disseminate authentic traditional costumes, including the ones belonging to different ethnic groups. Some cultural institutions, including the departments of culture at district level, included the National Day of the Traditional Costume in their activity each year.

Still there was the necessity form specialists from local museums and other cultural institutions, as well as craftsmen, in order to avoid kitsch and falsification of the traditional costume. Craftsmen and citizens revitalized the old techniques on confectioning the traditional costumes, but still the best craftsmen were absent from the biggest market. Due to this initiative organised at the national and local level, the craftsmen can expose and commercialize their handicrafts. Among non-specialists and the general public there is an interest in confectioning the traditional women’s blouse, so the national institutions, such as the National Centre for the Conservation and Promotion of the Intangible Cultural Heritage and the National Museum of Ethnography and Natural History initiated formational and educational activities.

In order to overcome some of the obstacles, we elaborated brochures, booklets for the visitors that were distributed to the public. They contained information on the traditional costume adapted to the public. Also, the announcement and information about the project were promoted on TV, radio and social media.

After the implementation of the project, the general public and the target groups became more aware and receptive to the values of traditional costumes inherited from previous generations, considering that we identified the following results:

The events include large exhibitions of heritage costumes from the Republic of Moldova to which can be discovered and analysed by different groups of interest. In addition to that, national museums started to expose traditional costumes in connection to knowledge regarding the history and significance of the Romanians and ethnic minority groups. That information is represented in diverse details and processes involving the crafting of traditional costumes like ornaments, techniques and old symbols.

One of the main lessons learned by the organisers was the need to collaborate between different actors involved in the preservation and promotion of cultural heritage. For a successful initiative, public authorities, NGO’s, private institutions and local communities must be interested in the promotion of this event, in its financing.

the process of organising the National Day of the Traditional Costume, the organisers identified new private partners interested in the development and promotion of cultural heritage, especially of the traditional national costume and learned how to attract new investments.

The National Day of the Traditional Costume transformed museums into places of creation, into cultural and artistic hubs that have the role to involve different categories of people and to create a platform for intercultural dialog.