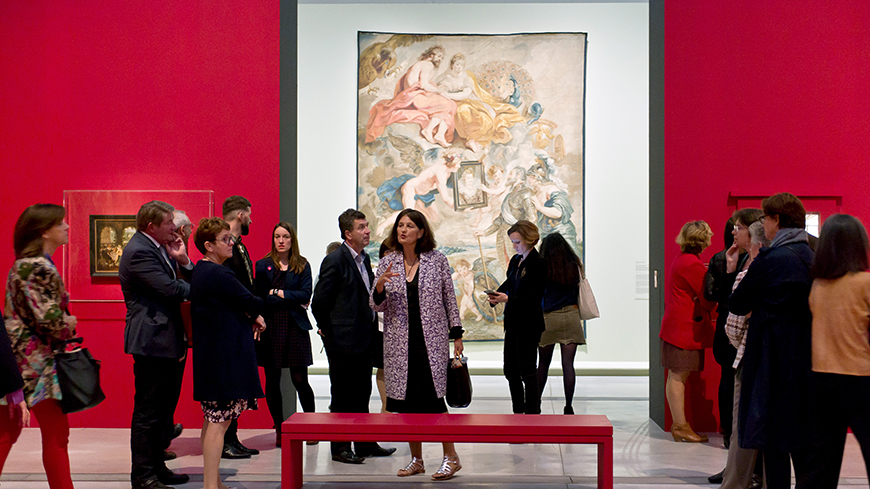 What was the methodology of your initiative and why did you take this approach?

Spatial planning policy must help to promote territories in difficulty. That was the case in Lens, where numerous partners decided to open a branch of the Louvre Museum to help the region overcome its economic difficulties.

The museum is one symbol of the reconversion of the Nord-Pas-de-Calais mining basin, located among sites placed since 30 June 2012 on the list established by the World Heritage Committee of the United Nations Educational, Scientific and Cultural Organisation (UNESCO).

The Louvre-Lens, the “second Louvre”, directed by Marie Lavandier, is located in Lens in the Pas-de-Calais region of north-west France; it is an independent establishment linked to the Louvre in Paris by a scientific and cultural agreement. Built on the site of what was once mine no. 9, the museum houses semi-permanent exhibitions representative of the main Louvre Museum’s collections, which are regularly renewed. It also organises temporary exhibitions at national or international level. When the museum was inaugurated on 4 December 2012, Saint Barbara’s day, an “open evening” was organised, with free entry from 6 pm to midnight. The museum officially opened its doors to the public on 12 December 2012.

This grand project on a national scale is not unique in France or even in Europe. It is part of an effort to put industrial wastelands to good use and reinvigorate the areas concerned. Similar projects include the swimming pool in Roubaix, the Pompidou Museum in Metz, or on an even larger scale, the Guggenheim Museum in Bilbao or the IBA in Emscher Park in Germany.

Lens and the coalfields, a difficult economic situation

· Located in the newly named Hauts-de-France region (Pas-de-Calais département), Lens saw the decline and relocation of its industry in the 1980s. These problems were compounded by the closure of the last coal mines in the early 1990s, plunging the mining town into an economic slump. In all some 200,000 jobs were lost in the Nord-Pas-de-Calais region over those two decades.

· In spite of national, regional and local policies to remedy the situation, the unemployment rate here is much higher than the national average. In the first decade of this century almost one person in five was jobless, 20% compared with a national unemployment rate of about 10%.

· In the early 2000s the Ministry of Culture decided to decentralise some of the major Paris museums to bring more culture to the regions. It was felt that this would also make certain struggling regions, like the coalfields, more attractive.

The project was carried out by a number of players with the aim of creating jobs, boosting economic activity and re-energising the region.

65% of visitors come from the surrounding region, the Hauts-de-France, where Lens witnessed de-industrialisation and industrial relocation in the 1980s, then the closure of the coal mines in the early 1990s, plunging the local population into major economic hardship, so that there was little spontaneous support for investing in an expensive new cultural project.

The results are inconclusive:

In terms of numbers of visitors the museum has been a resounding success, with over 900,000 visitors the first year, far more than anticipated. This is partly explained by its strategic location: only hours away from Brussels, Amsterdam and London, the museum has attracted people of 70 nationalities. At the same time, the year the museum opened the coalfields were classified as a UNESCO world heritage site, further enhancing the region’s image. The one-millionth visitor was admitted on 29 January 2014. In the space of two years the number of visitors rose to 1,400,000, including 500,000 in 2014. In 2017, it exceeded 450,000 visitors, making it the third most popular museum in the provinces (behind the Mucem in Marseilles and the Musée des Confluences in Lyons).

Interestingly, it attracts a larger percentage of blue-collar workers and employees than other museums in France.

A fine success for a town with a population of 30,000: “More than 65% of visitors are from the region”, explains Marie Lavandier, the museum‘s Director. Foreign tourists, on the other hand, account for only 20%.

Unemployment is decreasing, but remains higher than average, and fewer jobs than expected were created following the opening of the museum. The lack of hotel infrastructure, particularly high-end hotels, does nothing to encourage visitors to prolong their stay.

Investment in the Louvre-Lens project is funded mainly by the region (60%), with the European Union (20% via the ERDF) and also the Pas-de-Calais General Council (10%) the municipality of Lens and the “Communopole” (10% jointly). The same sources contributed in the same proportions to the initial investment.

The museum generated income of €3 million euros in its first year (€550,000 in the form of operating sponsorship and just under €2.5 million from ticket sales, temporary exhibitions, the museum shop, the cafeteria, the gastronomic restaurant, guided tours, room rentals, exhibition catalogues and so on. The remaining costs, some €12.5 million, are covered by the Regional Council (€8.7 million) and the Département Council and Communopole (to the tune of €1.1 million each). There are also other sources of income. The fact that entry to the Time Gallery exhibition was free of charge in 2013 and 2014 deprived the museum of a million euros. Every year since then the Board has debated whether to charge for entry, but decided against it. A survey found that charging an entry fee would deprive the museum of 33% of its visitors, and in 2019 the Board unanimously voted not to charge for entry in the foreseeable future; visitors must pay only to visit the temporary exhibitions, and will continue to do so.