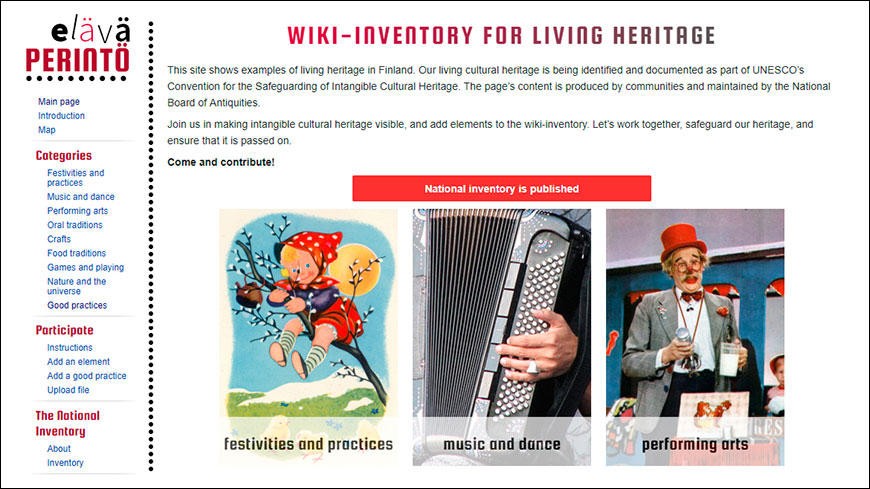 Wiki-inventory for Living Heritage is part of the implementation of the UNESCO Convention on the Safeguarding of the Intangible Heritage. Finland ratified the convention in 2013 and the Wiki was opened in 2016. The Wiki-inventory is a platform that is constantly being supplemented and updated.

Wiki-inventory for Living Heritage is a digital tool to compile information and present intangible cultural heritage in Finland, together with communities, associations, and other institutions. The Wiki was created and is administered by the Finnish Heritage Agency. The Wiki-inventory has in two years attracted over 140 articles from more than 200 communities in all domains and across the country. Practitioners and heritage communities produce the contents to the Wiki by telling about the element, its history and safeguarding. It can be used in three languages (fin, swe, engl) and articles in even other languages are encouraged. Elements within the Wiki-inventory can bi-annually be suggested for the National inventory, where from it’s possible to make nominations to the UNESCO lists of intangible cultural heritage.

A tool was developed to make this entry-level inventory in as simple and participatory way as possible, in order to provide the possibility for various groups, associations, and other communities to showcase, present and make known such intangible heritage that is living, important and meaningful for them.

The Wiki-inventory of Living Heritage has been a success in many ways. The number of entries and communities behind them is a proof in itself. Through Wiki-inventory it is possible to present rich and diverse cultural heritage from small individual phenomena to broad entities. Entries also include traditions from old and new minority groups in Finland and also from different age groups.

The Wiki is constantly monitored. The number of entries are followed-up, also in terms of which ICH domain they are, which part of the country or do they represent heritage from different cultural groups. The already gathered 140 articles provide a sound proof of its success. The visitors of the Wiki are constantly monitored. There are hundreds of visitors every day and not only from Finland, but all over the world. The Wiki has been presented in national, regional and local media which has given visibility to intangible heritage, its practitioners and safeguarding. In addition the Wiki has awaked a lot of interest in other member states of the UNESCO 2003 Convention, where new inventories are created or older ones are being modified to meet the needs of participatory approach.