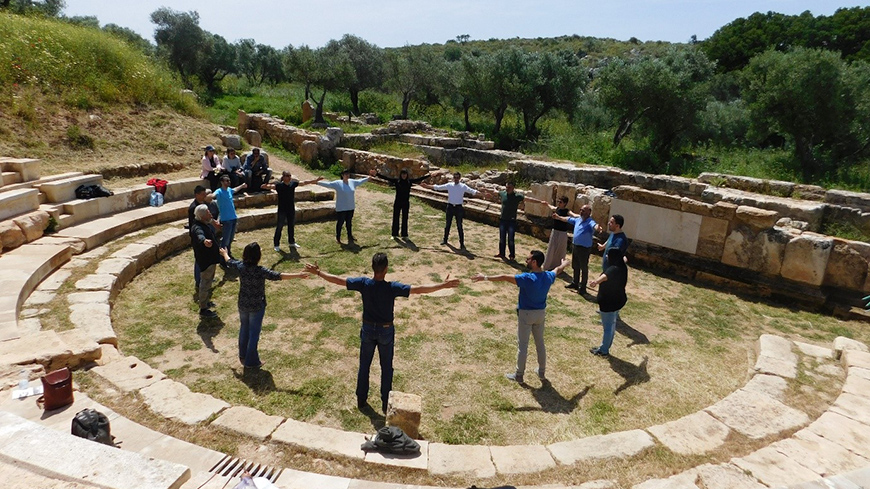 Photo credit: The group dramatizes in the orchestra of the ancient theatre of Aptera© Greek Ministry of Culture and Sports, Ephorate of Antiquities of Chania

The program was addressed to members of the Treatment Centre for addicted persons (KETHEA). That is why it was formed with the help of the person who is in charge of the Treatment Centre. The aim was to identify the contact of these people with the local and wider cultural heritage of the theatre and to assist in the detoxification effort, due to the therapeutic power of the theatre. The program had three parts. Initially, we visited the center and with the presentation of audiovisual material, observation, guided dialogue, face making, play and dramatization, we talked about the ancient and modern theatre focusing on their differences. Thus, from the purification of the passions of the ancient Greek theatre, we were transferred to the psychological impasses and the crisis of the human relations of the modern theatre. In the second phase, which lasted 2 months, each member, together with the therapists and animators, freely chose a literary or theatrical piece and practised acting with the help of a theatrologist. Finally, in the spring we gathered at the archaeological site of Aptera. The ancient theatre of Aptera was presented by a group of the members who spoke about its history and architecture, and then they all together they presented their act.

At the end there was a discussion in the orchestra about the impact of this action on everyone.

There were no problems. Participants ranged in age from 25 to 70 years. We initially thought this would be an obstacle, but everyone reacted satisfactorily.

The results of the action were evaluated with a questionnaire and an interview. As a result, through discussion, play and dramatization, these people widened their knowledge, they learned about their wider and local cultural heritage (the Aptera and the ancient theatre), and they learned about modern theatre, which was something they ignored. Thus, they formed a positive attitude towards cultural heritage. The comparison they made between ancient and modern theatre helped to develop mental abilities such as observation, judgment, and expression. Social skills such as cooperation, teamwork, mutual respect and discipline were enhanced. Importantly, with dramatization, patients were able to understand themselves and externalize their inner world, cultivate their self-confidence and self-esteem, reach a level of self-awareness, and develop empathy. Everyone responded that they were helped in their treatment.

Through this action, we have learned that cultural heritage, as addition to be a source of knowledge and experience of the past, can be therapeutic and help people with problems. All people, regardless of age and educational level, become recipients of culture and are attracted to the journey into the experience of the past. Experiencing the cultural heritage has better results, both in terms of acquiring and assimilating knowledge and in terms of results in the human soul. This action was of practical social interest to the vulnerable group of individuals with addictions, activating their response, thereby enhancing social cohesion.