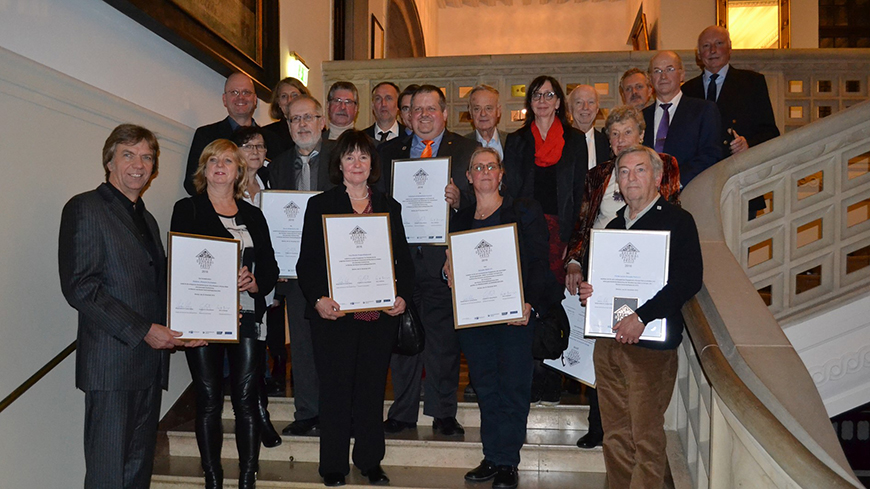 Brief description of the initiative

As a result of the joint initiative of the State Office for the Preservation of Monuments and the Aufbaugemeinschaft Bremen e.V., the Bremen Prize for the Preservation of Monuments was established in 2010. The initiators were able to win the Chamber of Architects, the Chamber of Crafts and the Bremen Chamber of Commerce for Bremen and Bremerhaven as active cooperation partners. Media partners are the local newspapers, Weser-Kurier in Bremen and Nordsee-Zeitung in Bremerhaven.

The particular importance of the prize is reflected by the patronage of the President of the Senate, Mayor Dr. Carsten Sieling, who also holds the office of Senator for Culture. The broad societal anchoring of the Heritage Prize shows that the preservation of monuments in Bremen is seen as an important part of urban development by all relevant institutions. The Bremen Prize for the Preservation of Monuments has been awarded every three years since 2010. It aims at architects and engineers, craftsmen, private and public builders as well as volunteers, associations and initiatives which are particularly devoted to the protection of specific historical monuments.

Awards and Recognitions: the award for outstanding commitment/results consists of a certificate and a plaque that can be attached to the monument. The monetary prize and the special prize provided by the media partners are awarded exclusively to private builders and volunteers. However, the focus is on the award, not the cash prize. The prize money amounts to € 3 000. This amount can also be divided into several parts, for example, two prizes of € 1 500 each. The special prize of

€2 500, which is financed by the media partners, is supposed to go regularly to volunteers/associations/institutions. A cash prize for the commitment of volunteers is considered to sustainably promote their activities in terms of monument preservation.

In addition to the award of the monument conservation prize in the form of certificates, plaques and prize money, in various categories (Category I - Architects, Category II - Craftsmen, Category III - Building Owners, Category IV - Voluntary Commitment) certificates are awarded as acknowledgements for good renovation measures.

The jury which decides on the awarding of prizes and recognition is composed of a representative of each of the initiators, the cooperation partners, an expert from another office for the preservation of historical monuments (in order to obtain a “view from outside”) and a representative of urban planning.

The aim of the Bremen Monument Preservation Award is to acknowledge the special commitment of individuals to the preservation of monuments and to raise public awareness. In addition to the appreciation of above-average commitment and particularly high quality, exemplary achievements should be highlighted in public to encourage imitation. The State of Bremen has a long history with valuable architectural monuments in the cities of Bremen and Bremerhaven. By formulating the award, all those involved in a specific process of monument preservation are considered.

In order to actually implement the idea, the initiators, the State Office for the Preservation of Monuments and the Aufbaugemeinschaft Bremen e.V. could win the Chamber of Architects, the Chamber of Crafts and the Bremen Chamber of Commerce for Bremen and Bremerhaven as active cooperation partners. The local newspapers Weser-Kurier in Bremen and Nordsee-Zeitung in Bremerhaven are the media partners, who were excited by the idea of launching the award.

The patron of the Bremen Monument Preservation Award is the President of the Senate, Mayor Dr. Carsten Sieling, who also holds the office of Senator for Culture.

Fortunately, there were no obstacles.

At all times there was a good understanding between the initiators and partners. The local population, craftsmen and architects are also very interested in the awarding of the Bremen Monument Preservation Award.

All in all, the Award raises awareness of the work of monument preservation and sensitizes the population to the cultural heritage of the State of Bremen. Since the introduction of the Bremen Heritage Award, it has become apparent that more and more Bremen citizens are interested in their city’s history.

It can be observed that monument owners are increasingly taking special care of their monuments. Well-trained craftsmen and architects who are involved in the professional restoration of monuments also contribute to this.

Craftsmen and architects who have been awarded with the Bremen Historic Monument Award use the prize to promote their skills.

It is important to present positive restoration measures on monuments in public. Many monument owners are interested in them and would like to imitate them. Craftsmen are also very interested and would like to improve their skills. Monuments are often difficult to repair due to their age, special construction methods and building materials. Here it is important for craftsmen to get to know non-standardised solutions.

In order to bring the significance of our cultural heritage closer to the local population, it is important to award the prize and furthermore to network well with our partners. They support the prize and also maintain contacts in society in a variety of ways.

Tourists also like to visit our city that maintains its historic monuments. The local population is also pleased about this.