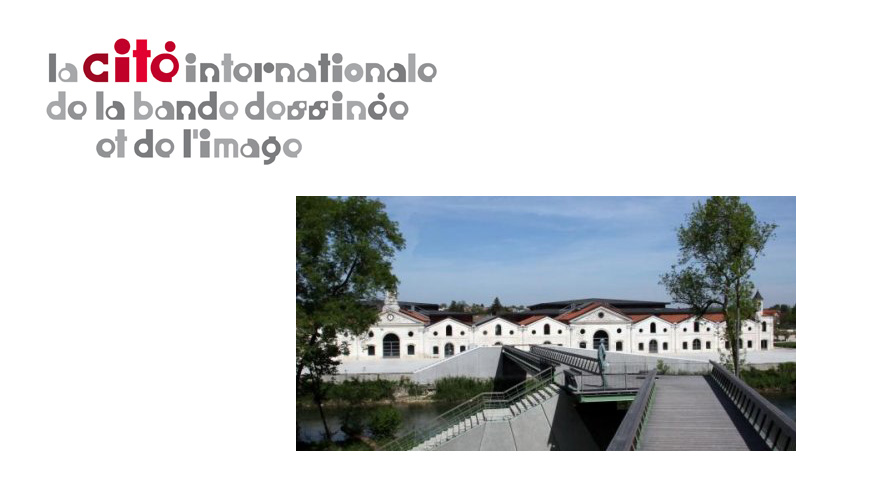 The Cité internationale de la bande dessinée et de l’image (International Centre for Comics and Images, the Cité), located in Angoulême (Charente) is a public cultural co-operation establishment (EPCC) of an industrial and commercial nature instituted by the Charente Département, the French Ministry of Culture, the City of Angoulême and the Nouvelle-Aquitaine Region, with a focus on comics and images.

The Cité houses the Comics Museum, classified as a “Museum of France”, exhibition galleries, a heritage library, a specialised public library, a documentation centre, an international artists’ residence (the maison des auteurs), a reference bookshop, an art film theatre, a seminar and conference centre and a panoramic restaurant. The Cité organises numerous exhibitions, weekly meetings with authors, and cultural events.

It has an exceptional collection unique in Europe, conserved and exhibited in an old, restored winery which provides 1,300 m² of exhibition space showing original artwork, drawings and related material. Many events are held there, including exhibitions, mediation workshops, conferences, etc.

The maison des auteurs artists’ residence was opened in July 2002 to provide practical support to creators of comics living in Angoulême or wishing to work there for a while. Since 2008 it has been one of the departments of the Cité, an international residence which has been open from the outset to authors of comic strips, illustrators, animated cartoon artists, etc.. for stays ranging from three months to two years.

With a collection unique in Europe, including comprehensive collections of French comics from 1984 to 2014 and extensive coverage of earlier periods and of international production, the library, which is associated with the French National Library (Bibliothèque Nationale de France), comprises a public reading room, a documentation centre on comics and a heritage conservation section. It is open all year round and has a collection of over 46,000 comic albums for adults and children which readers can consult on the spot or take out on loan; access to the reading room is free of charge and open to all. The library organises numerous events: comics café, organised once a month in the city centre, readings of tales for children, lending of trunks full of comics to schools, courses and training.

Commonly known as the Angoulême festival, it is the leading French-language comics festival and the largest in Europe in terms of renown and cultural reach.

The Festival has been held in January every year since 1974, and combines exhibitions, debates, encounters and book-signing sessions attended by leading authors of French comic strips and graphic novels. Various prizes are awarded, including the Angoulême Grand Prix, honouring an author for his or her life’s work, and the Fauve d'Or, for the best album published the previous year.

Since it opened in 2002 the maison des auteurs has housed 200 artists in residence, with another fifty or so local authors also using its numerous services.