Anti-discrimination education for professionals at the POLIN Museum 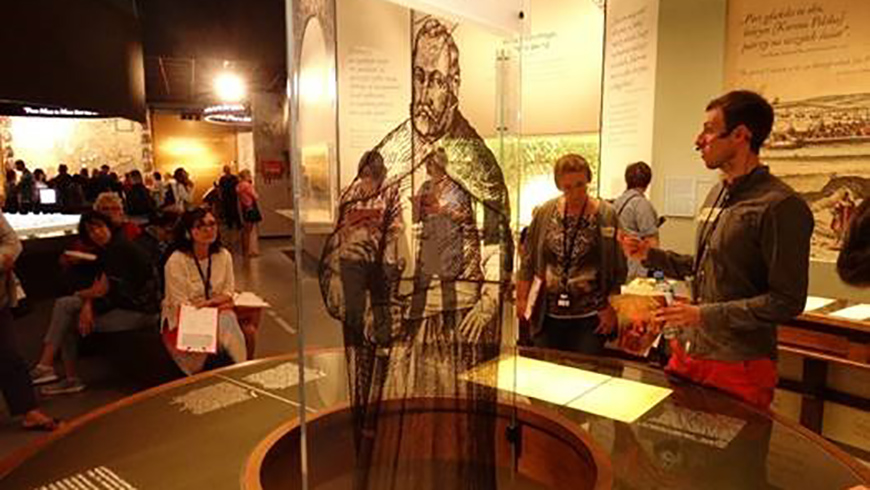 Museum of the History of Polish Jews (POLIN Museum)

The mission of the Museum of the History of Polish Jews is to contribute to the formation of modern individual and collective identities amongst Poles, Jews, Europeans and citizens of the world by recalling the thousand years of Polish-Jewish history. Anti-discrimination projects are an important part of fulfilling this mission. We are committed to building an open and tolerant society in which minorities, including the Jewish minority, will be able to operate freely, cultivate their traditions and develop, thus strengthening the social capital of Poland and Europe.

The idea for the project is to organise a series of anti-discrimination training sessions, using a unique method developed by the Museum’s Education Department. This method combines anti-discrimination training with elements of history education. The Museum’s Core Exhibition content provides an exceptional tool to educate about the history of Poland, as presented through the story of its Jewish inhabitants and their relations with the Polish majority. Responding to the needs of target groups - police, teachers and local government representatives – the Museum has invited the Roma organisation as a partner in the project.

Three separate workshop scenarios, with different training approaches, were developed: one for police personnel, one for teachers and one for local government representatives.

During the two-day training sessions, participants learn to categorise current, prevailing, discrimination narratives, including those which can focus on antisemitism, anti-Roma, anti-migrant and gender discrimination. They are presented with the persistence of discriminating practices, using past examples to explain the mechanisms of current, discriminatory narratives in order to produce a set of counter-narratives. Trainers facilitate the process of knowledge exchange amongst participants and reinforce their skills in recognising and countering intolerance. Examples of discriminatory social mechanisms, drawn from the past, are discussed in a contemporary context, allowing participants to look at conflicts from a less emotional standpoint. By referring to the past, we seek to sensitise participants to signs of discriminatory practices, while encouraging them to adopt an active, social attitude that could prevent the escalation of hatred today. Thus, participants learn to recognise persistent mechanisms which lead to racism, discrimination and other forms of exclusion.

The project has been implemented in cooperation with the Headquarters of the Police Commander-in-Chief. Within the five years of the programme (which is still continuing) ideas have developed, the horizon of activities has broadened, and the program has deepened.

Two brochures and one handout for the police have been prepared, in cooperation with police experts and specialists from the Roma and Jewish communities:

As an extension of the brochures and as a model of dissemination, a series of lectures for police officers is organised in police-training centres and in local police command offices. Elements which determine the uniqueness, and which determine the high level of the program are:

- basing all the elements of the program on specialists, both in the field of anti-discrimination and in the prevention of unequal treatment, as well as in education, in knowledge of the history and culture of the Jewish and Roma communities in Poland;

- close cooperation with representatives with all groups to which the project is addressed and an ongoing evaluation process, allowing for its adaption in response to real needs;

- utilising examples from history, as well as museum and exhibition space, to implement training and to point out examples of mechanisms which can be translated into contemporary realities;

- utilising real case studies, from the experience of the professional groups at whom the project is addressed;

As with numerous projects aimed at social change, with hard to determine “concrete results, the basic challenge is finding the funds for its implementation and ensuring the continuity of the work with groups at whom the project is directed. In the case of working with the police, with its large, internal hierarchy and caution with respect to external entities offering training to its personnel, it was necessary to acquire an ally within that structure – a specific partner, who trusted the Museum and who decided to implement a project pilot. During the continuation of the activities, it has been necessary to maintain close relationships with those individuals responsible for police training and to consult with them about each new, proposed element. In the case of teachers and other professional groups, the obstacle is often an inability to participate in this type of training during work-hours (participants use their personal time) and the inability to reach out to potentially interested persons (the recruitment process for people to participate in the training). Other difficulties in the implementation of the programs are the conditions inside the Museum which, as a cultural institution, performs many tasks in parallel. There is a lack of time of the people employed to carry out all their tasks and/or a lack of space in which to carry out the training. Due to increasing polarisation and social tensions, the Museum and its partners face criticism, an undermining of professionalism, legitimacy and need for such activities, in general, as well as engaging police personnel and teachers.

Thanks to the long-term, consistent implementation of the project, and a stable working relationship based on partnership and mutual trust both with the institutions implementing the project and with the recipients, training sessions carried out by the Museum and the project’s resultant materials have become part of the repertoire of activities and have been very well assessed. As part of the program, a total of 40 one-day and two-days training sessions have been conducted, attended by 450 police personnel and by more than 300 teachers and pedagogy students. 15 lectures about the Roma community have been delivered, while 16 have been delivered about the Jewish community. They were attended by, in total, more than 2600 police personnel. Almost 6,000 brochures were distributed throughout the country. Digital versions are available on the website of the Police Headquarters and also on the websites of individual Province Police Headquarters. Lectures on the Roma and Jewish communities are delivered as part of the basic course in all police schools in the country. Brochures about these two communities have been reprinted three times and the Museum is constantly asked by police units, from around the country, for more copies. Based on the partnership in the implementation of these projects, close further cooperation, beyond the project, has been established with NGO partners. The POLIN Museum is increasingly treated as an expert institution, with an acknowledged, recognisable brand in the field of anti-discrimination education and is invited to work together with other or to provide expert consultation. In the Museum, itself, anti-discrimination projects, aimed at various groups of recipients, have permanently become one of the institution’s priority activities, understood as a direct implementation the Museum’s mission.

Key experiences gained from the implementation of the project relate to the method of its implementation - good planning and the anticipation of possible obstacles. In “soft” projects concerning multi-culturalism, aimed at various social and professional groups, what are very important are the CREDIBILITY of the project’s implementer and its OPENNESS to the voices coming from the target group themselves. Achieving the former is aided by establishing working partnerships with institutions and individuals specialising in specific areas covered within the project. Transparency throughout the entire implementation period, as well as research and experience, are also important.

Due to the sensitivity of topics covered in the activities, as well as the changing political, financial and social situation, it is worthwhile to maintain a large planning margin, allowing for changes and modifications to be made, as well as to allow for ongoing adaptations of the project in order to cater for needs as they arise. In working together with specific professional groups, especially the institutional, it is necessary to seek allies within these institutions, people who are convinced of the value and usefulness of the proposed activities and who are prepared to lobby for them within their own institution. Such people should also be involved in the planning stage – which results in easier implementation and a better adaptation of plans to the needs and capabilities of the project’s participants