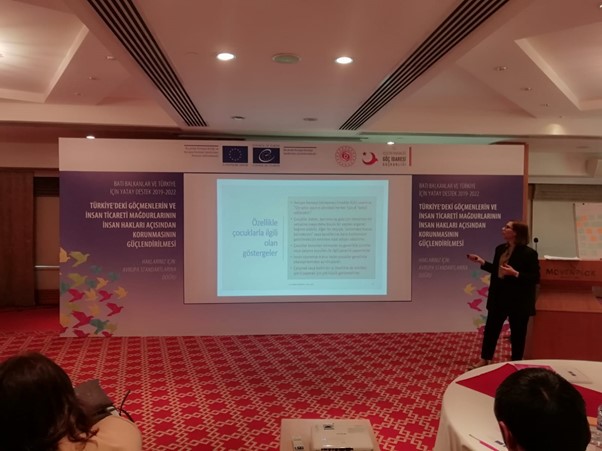 Strengthening of identification and referral of the victims of labour exploitation was the focus of the training for 39 labour inspectors from the Ministry of Labour and Social Security, delivered during 7-10 March 2022, under the joint European Union and Council of Europe action on “Strengthening the human rights protection of migrants and victims of human trafficking in Turkey”.

The Prosecutor of the Turkish Court of Cassation Rıfat Sagut and local experts, Ezgi Yaman Kennedy and Burçak Özoğlu delivered training sessions and case studies on the characteristics of trafficking in human beings (ThB), its legal and institutional framework, the identification of victims of labour exploitation in Turkey, as well as the national referral and assistance pathways for victims of labour exploitation.

The training also received significant contributions from stakeholders such as the Deputy president of the Presidency of Guidance and Inspection, Mr Onur Batuman, who also presented a session on the phenomenon of labour exploitation in Turkey and good practices against it. The Presidency of Migration Management facilitated a session on the Anti-Trafficking Coordination System and National Referral Mechanism.

The training was highly interactive and valuable inputs were received from participants on the situation in the field and a vast majority of participants reported having significantly increased their knowledge on the identification and referral of victims of labour exploitation.

This event was organised within the framework of the action “Strengthening the human rights protection of migrants and victims of human trafficking in Turkey”, part of the joint European Union/Council of Europe programme “Horizontal Facility for the Western Balkans and Turkey 2019-2022”.