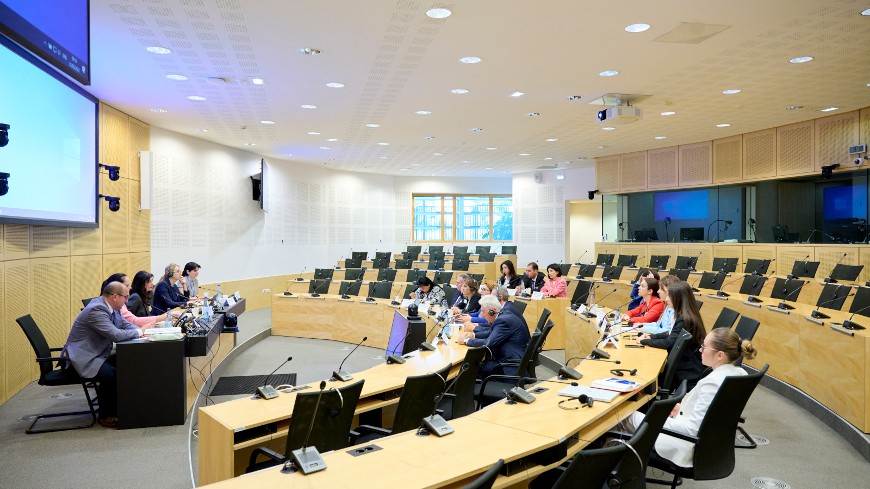 On 31 May and 1 June, a high-level delegation from the Court of Cassation of the Republic of Armenia, headed by its President Lilit Tadevosyan, met in Strasbourg with representatives of the Office of the Commissioner for Human Rights, the Registry of the European Court of Human Rights and several departments of the Directorate General of Human Rights and the Rule of Law.

In her opening remarks, President Tadevosyan underlined that "the mutual goal is to strengthen public trust towards the judiciary and the support of the Council of Europe in this regard is very important.”

The high-level delegation from the Court of Cassation of Armenia included the heads of the Criminal and Civil and Administrative Chambers, Hamlet Asatryan and Ruzanna Hakobyan, as well as judges and clerks of the Court.

Participating in this meeting from the Directorate General Human Rights and Rule of Law were the Department for the Implementation of Human Rights, Justice and Legal Co-operation, the Department for the Execution of Judgments of the European Court of Human Rights, the Secretariat of the Consultative Council of European Judges (CCJE) and the Secretariat of the European Commission for the Efficiency of Justice (CEPEJ).

The visit and meetings were organised in the framework of the EU/CoE project "Support to judicial reform - strengthening the independence and professionalism of the judiciary in Armenia" and the project "Support to the execution by Armenia of a judgment under Article 6 of the European Convention on Human Rights" funded by the Human Rights Trust Fund.