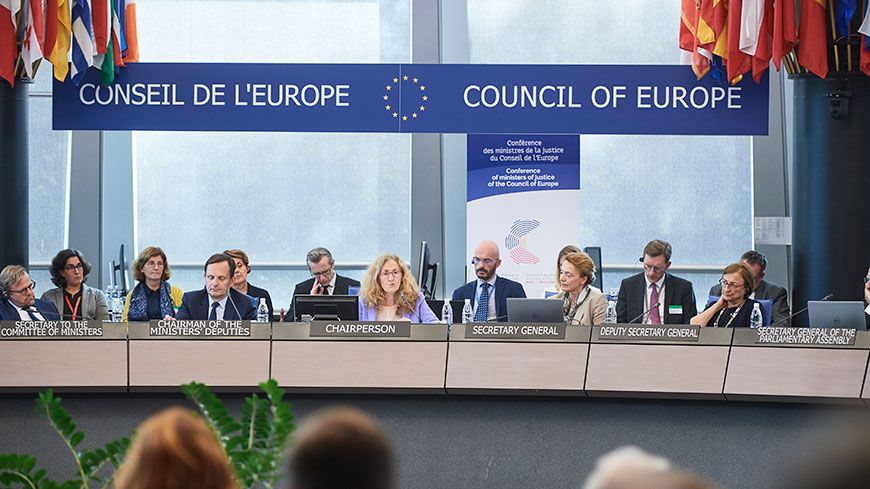 On 14 and 15 October 2019, the Ministers of Justice of the member states of the Council of Europe met in Strasbourg at a conference on the theme “Digital challenges to justice in Europe”, held on the initiative of the French Chairmanship and at the invitation of the French Minister of Justice, Nicole Belloubet, and the Secretary General of the Council of Europe, Marija Pejčinović Burić.

A large number of ministers and senior representatives of Ministries of Justice replied positively to the French Minister’s invitation, which revived a practice which had not been seen for several years. Participants in the conference also included the President of the Parliamentary Assembly of the Council of Europe, the President of the European Court of Human Rights, the Commissioner for Human Rights and a representative of the European Commission for the Efficiency of Justice.

Following up on work set in motion by the Finnish Chairmanship, the conference presented an opportunity to the participants to discuss “Access to justice in the digital era” and “The impact of digital technology on criminal justice”. They exchanged information on good practices at national level and raised judicial issues linked in particular to artificial intelligence, stressing the need to place citizens at the heart of the justice system in the digital era.

All of the speakers welcomed the Council of Europe’s ambitious work to reap the full benefits of the immense opportunities afforded by digital tools while preventing the adverse effects that they may have on fundamental rights and freedoms.

Following the discussions, the French Chairmanship issued a statement, in which it called for continued dialogue between member states and highlighted the Council of Europe’s decisive role in establishing a legal framework to meet the challenges of this new digital space.