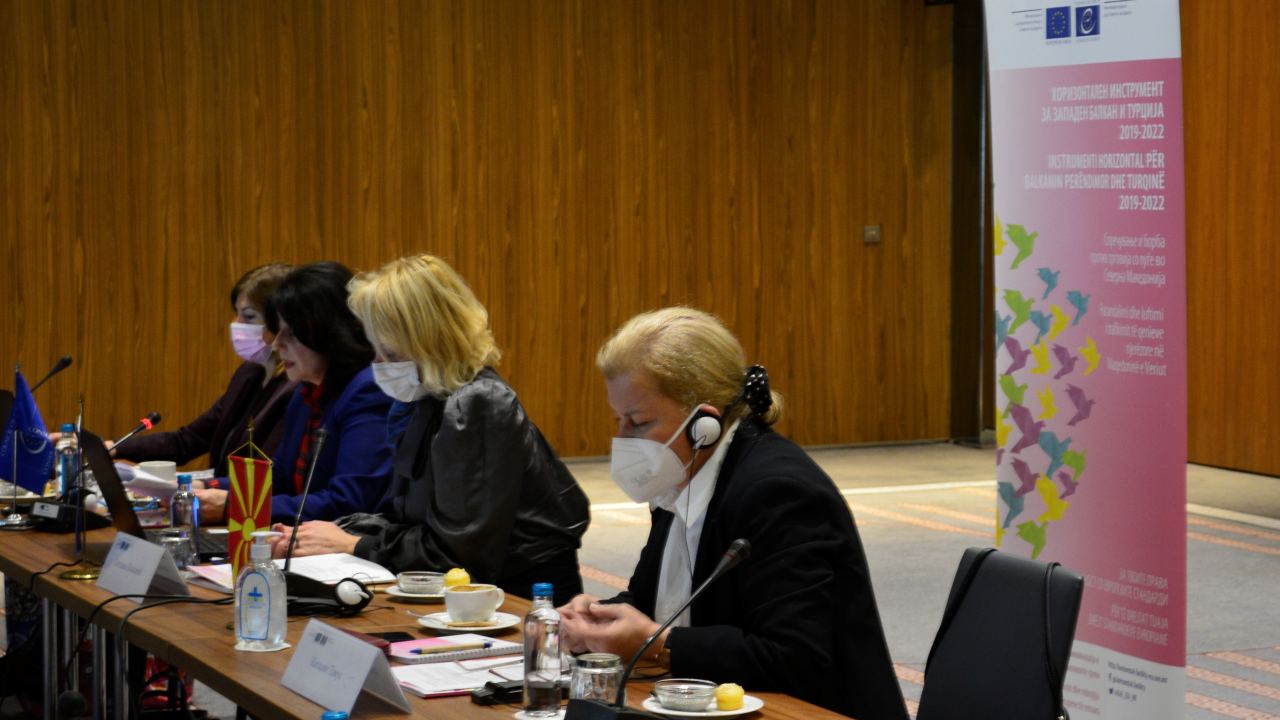 The fifth meeting of the Steering Committee of the EU/CoE HFII action “Preventing and Combating Human Trafficking in North Macedonia” took place on 3 December 2021 in a hybrid form in Skopje. The meeting, organised in cooperation with the National Commission on Combating Human Trafficking and Illegal Migration gathered 22 members and observers coming from the main anti-trafficking institutions, EU Delegation and NGO sector in North Macedonia. The aim of the meeting was to inform the beneficiaries about the progress of the implementation of the action, the main milestones for the upcoming six months and provide an opportunity for the members to discuss the achieved results and challenges yet to be addressed in the anti-trafficking field.

The opening speeches were delivered by Ms. Magdalena Nestorovska, the National Coordinator of the national anti-trafficking commission, Ms. Katalin Tamus, the Programme Director and Ms. Lejla Dervišagić, the Operational Director of the CoE Programme Office in Skopje who highlighted the importance of delivering coordinated results under the action and the support provided by the Council of Europe to the local anti-trafficking actors on ensuring compliance with the Convention on Action against Trafficking in Human Beings in partnership with the European Union.

During the meeting were tackled tangible achieved results in preventing and combating child trafficking, as well as in building capacities of various stakeholders in identification, protection and criminal prosecution of cases of human trafficking. The challenges for the upcoming period include accessible compensation for victims of human trafficking and capacity building of health professionals on detection, identification and referral of potential trafficking victims.

The discussion further focused on the needs of the beneficiaries and remaining challenges regarding identification and referral of potential victims of trafficking for the purpose of labour exploitation, and assistance and protection of potential child trafficking victims.

The action on “Preventing and Combating Human Trafficking in North Macedonia” is part of the joint European Union and Council of Europe programme “Horizontal Facility for the Western Balkans and Turkey II” which aims at assisting beneficiaries in the Western Balkans and Turkey to comply with the Council of Europe standards and European Union acquis in the framework of the enlargement process when relevant.