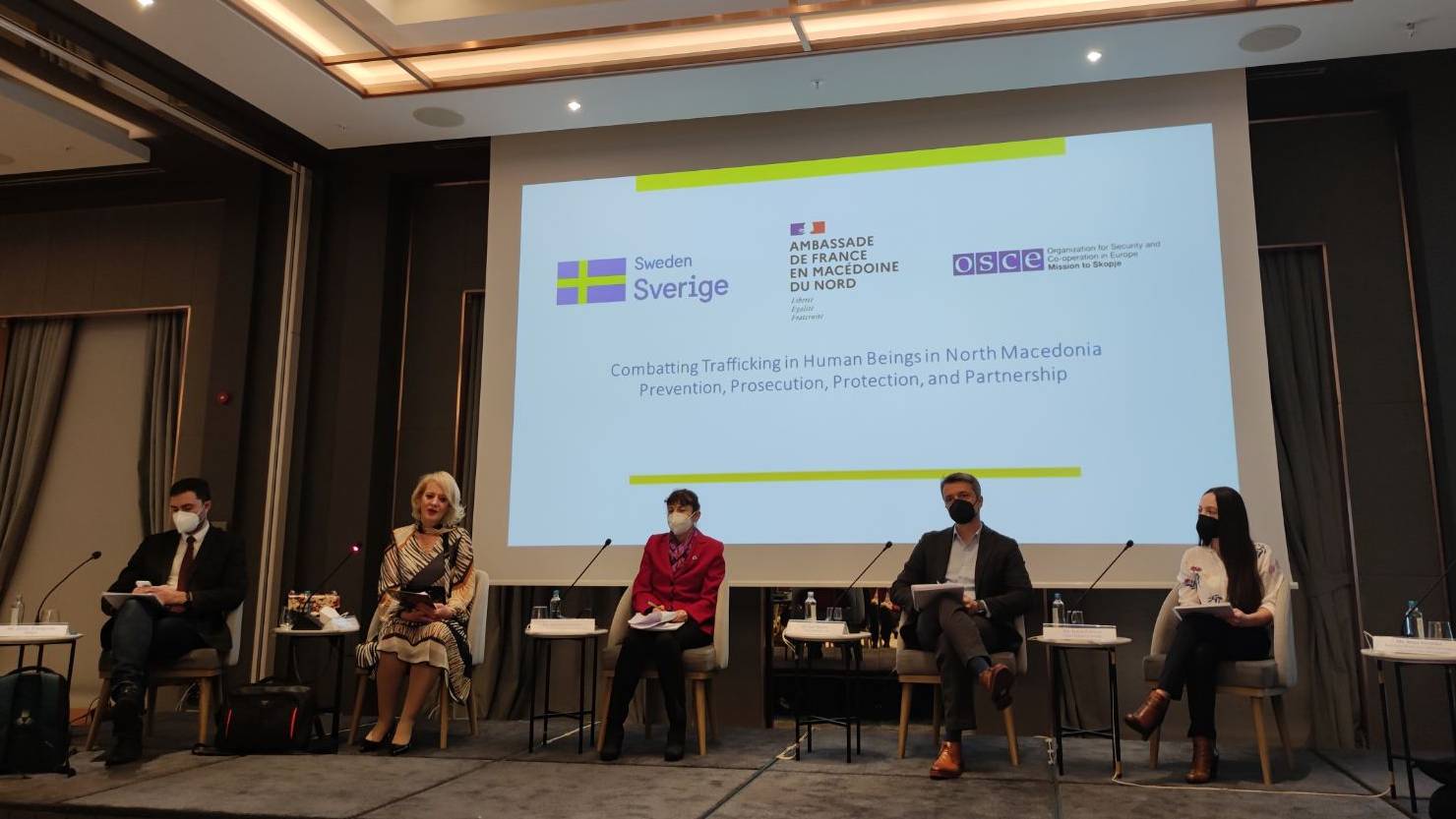 Trafficking in human beings is a serious human rights violation and a complex crime, that brings large profits to the traffickers. A partnership of the key stakeholders in preventing human trafficking, protecting trafficking victims and prosecuting traffickers is a key to effective and adequate anti-trafficking response.

To support co-operation and encourage partnerships in the fight against human trafficking among local anti-trafficking actors, the Swedish and French embassies, as well as the OSCE Mission to Skopje joined their forces to organise a panel discussion on the so – called “4 P-s”: prevention, protection, prosecution and partnership in the anti-trafficking field. The event supported by the EU and Council of Europe joint action on “Preventing and Combating Human Trafficking in North Macedonia”, was attended by approximately 80 participants from the embassies, international organisations, local institutions and the NGO sector.

“It is unfortunately clear from recent reports that we are not doing enough to prevent trafficking and to protect victims of this crime. Data from the United Nations as well as the EU show that a far too many people in the world are being sexually exploited as victims of trafficking, the vast majority of them are women, and far too many of them are children.”- said Ms. Anna Ekstedt, Ambassador-at-Large for combating trafficking in persons at the Swedish Ministry for Foreign Affairs.

Mr. Jean-Claude Brunet, Ambassador-at-Large for the fight against transnational criminal threats at the French Ministry for Europe and Foreign Affairs stressed the French policy against human trafficking embedded in the inter-ministerial action plan on identification, protection of victims, investigation and prosecution of the organised crime perpetrators. He tackled the global approach and the European and bilateral synergies aimed at strengthening the anti-trafficking response.

Ms. Svetlana Vlahović -Dimanovska, the Deputy National Coordinator of the National Commission on Fight against Trafficking in Human Beings and Illegal Migration of North Macedonia, provided the most recent information about an increased number of identified victims, with the majority being exploited for their labour. She warned against the increased risks of trafficking due to the pandemic and the abuse of the internet for recruiting trafficking victims.

“Many of the global and regional challenges are mirrored in North Macedonia, where there are cases of trafficking for sexual and labour exploitation. There are also reports of sex trafficking among Romani children within forced marriages, as well as serious indications that Romani children are forced into begging and street vending” – asserted the Deputy Head of OSCE Mission to Skopje, Mr. Jeffrey Goldstein.

Representatives from the National anti-trafficking commission, the Basic Prosecutor’s Office on Organised Crime and Corruption, the NGOs Open Gate and Macedonian Association of Young Lawyers (MYLA) and IOM discussed the state of play, results, challenges and possible solutions in respect of prevention, protection, prosecution and partnership to combat human trafficking. The discussion focused on the local and international co-operation to improve identification and prosecution of trafficking cases involving migrants, improving international and transnational cooperation in the joint combat against trafficking in human beings, improving compliance with the international anti-trafficking commitments, securing funds for adequate assistance to presumed and identified trafficking victims and including labour inspectors, health care workers and education officials among anti-trafficking actors.

In the concluding remarks, the Swedish Ambassador in North Macedonia, HE Kristin Forsgren Bengtsson stated “Both at the UN level and as a Chair of the OSCE, we have put a strong emphasis on gender equality and including women in all processes”. She further spoke about the positive example of Sweden and France that have joined forces in combating human trafficking for sexual exploitation in Europe and globally.

HE Cyrille Baumgartner, the French ambassador to the Republic of North Macedonia underlined the importance of the cooperation between the countries of origin, transit and destination, as well as of imposing dissuasive penalties to the traffickers. He concluded by stating that North Macedonia should base its anti-trafficking plan on prevention, protection, prosecution and partnership in order to intensify the fight against trafficking in human beings.

The action on “Preventing and Combating Human Trafficking in North Macedonia” is part of the European Union / Council of Europe programme “Horizontal Facility for the Western Balkans and Turkey II” aiming at assisting beneficiaries in the Western Balkans and Turkey to comply with the Council of Europe standards and European Union acquis in the framework of the enlargement process.