Child trafficking still on the rise in the Western Balkans, said participants of a regional conference

The European Union and the Council of Europe emphasise the importance of interstate cooperation and joint initiatives as the only solution for its prevention
SARAJEVO, SKOPJE, BELGRADE 22 - 23 June 2021 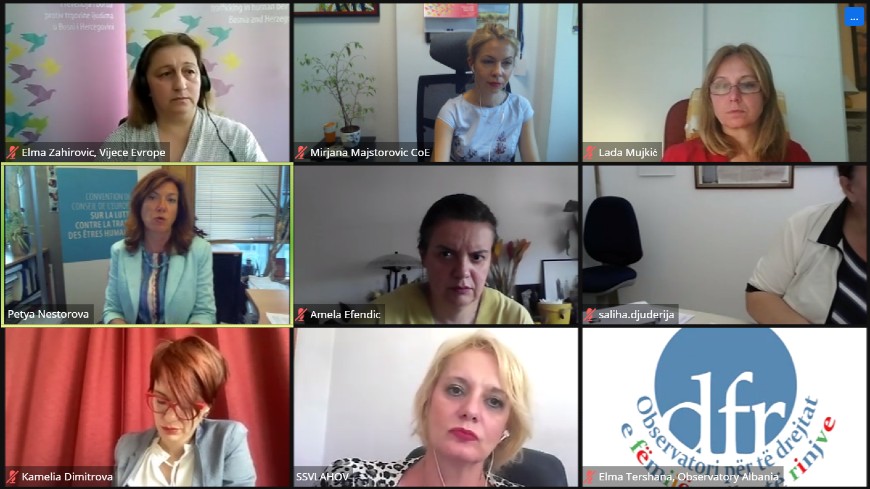 Belgrade, 22 June 2021 – Child trafficking in the Western Balkan region has continued to rise, despite a number of legislative and practical measures taken over the years. The COVID-19 pandemic has made children even more vulnerable to trafficking, due to growing economic insecurity, unemployment and restrictions of movement. This has been underlined during the first day of the two-day regional conference “Acting together in face of crisis: Protecting children from trafficking and exploitation in the Western Balkans”, organised in the framework of the joint European Union and Council of Europe programme “Horizontal Facility for the Western Balkans and Turkey 2019-2022”, which gathered more than 130 participants from the region and beyond.

Petya Nestorova, Executive Secretary of the Council of Europe Convention on Action against Trafficking

in Human Beings, recalled that the Convention requires state parties to take specific measures regarding children. “We need to strengthen our joint efforts to address the structural factors underlying human trafficking and promote durable solutions for children vulnerable to trafficking and exploitation. Anti-trafficking measures should be integrated into the general child protection system, bringing together social, health and education services”, Nestorova emphasised.

In his welcome address, Samir Rizvo, Assistant Minister and State Co-ordinator for Combating Trafficking in Human Beings and Illegal Migration, Ministry of Security of Bosnia and Herzegovina reminded that the Western Balkans are facing major security and humanitarian challenges caused by mass and mixed migration flows, within which child trafficking is widely present. „I am sincerely grateful to the Council of Europe and the European Union for organizing this joint conference, where we will be able to discuss joint action during the crisis and protection of children from trafficking and exploitation in the Western Balkans. This is especially important as most potential and formally identified victims of trafficking and the main target of traffickers are unaccompanied children”, Rizvo said.

Verena Taylor, Director of the Office of the Directorate General of Programmes of the Council of Europe underlined the importance of multi-agency collaboration and joint efforts of states in combating and preventing child trafficking. “I am pleased to see that all partners are gathered to discuss areas of risks and measures to fight this phenomenon in the Western Balkans. Only by working together can we prevent child trafficking and support the development of victim-centred policies. We must strengthen capacities to prevent and combat trafficking in human beings, and to protect the rights of all victims”, Taylor emphasised.

Alexandra Antoniadis, Deputy Head of the Organised Crime and Drugs Policy Unit, DG HOME, European Commission, highlighted that preventing and combating child trafficking is one of the priorities of the European Commission. “Thousands of individuals are victims of trafficking annually, and the COVID pandemic has further intensified the risk of victimisation and exploitation. Despite all our efforts, there are still significant shortcomings. This is why the Commission adopted the new strategy against trafficking in human beings setting out a wide range of actions ensuring that perpetrators are brought to justice and that victims receive the necessary protection and support”, Antoniadis noted.

Deputy Head of the Delegation of the European Union to Bosnia and Herzegovina Ekaterina Dorodnova said: “The EU firmly supports the fight against trafficking in human beings, including children, in BiH and the entire region through a number of national and regional projects. Many children in BiH are subjected to different types of abuse and exploitation and are often physically and emotionally harassed. The EU works jointly with the Council of Europe and other partners to identify and support the victims and to promote strong structures in BiH to prevent these crimes and to have the human rights of children fully respected. The EU has provided funding to ensure shelter for over 500 unaccompanied minors who entered BiH as part of migration flows and ensured the right to education to over 4000 migrant children. This work will continue in co-operation with local and international partners.”

Reports from the CoE’s Group of Experts on Action against Trafficking in Human Beings (GRETA) highlight that the real numbers of persons, including children, falling victims of trafficking are probably higher than the official data suggest. The real scope of the phenomenon is difficult to measure due to the invisible and hidden nature of trafficking, and challenges related to victim identification.

*This designation is without prejudice to positions on status, and is in line with UNSCR 1244 and the ICJ Opinion on the Kosovo Declaration of Independence