The city’s population is around 6000 inhabitants, among which 5% are non-national residents. Further information about the composition of the nonresidents population are not available at the moment, but will soon be known due to the census and the Residence Card scheme. 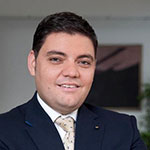