All Sectors of the Council of Europe joined the Orange the World! Campaign to mark the 16 Days of Activism to Eliminate Violence against Women 2020 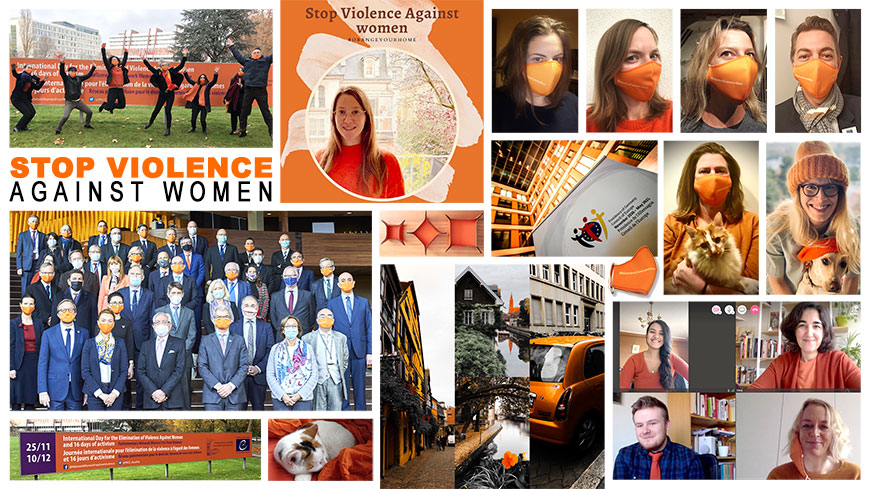 The 16 days between 25 November, the International Day for the Elimination of Violence against Women, and 10 December, Human Rights Day, are known as the 16 Days of Activism against Gender-Based Violence Campaign, a time to encourage action to end violence against women and girls around the world.

This year again, the Council of Europe joined the “Orange the World” campaign with the organisation of an “Orange the World! Orange your Home!” virtual photo exhibition with the active participation of staff members from permanent representations, field offices and headquarters.

On 8 December, the Council of Europe’s Committee of Ministers joined the action, wearing orange face masks, in support of the Istanbul Convention.

As the lockdown and the health crisis lead to higher risks of gender-based violence and to enhanced difficulty for victims to access protection across the continent, it is all the more necessary to support the ratification and full implementation of the Istanbul Convention.

The fight against all forms of violence against women and girls is high on the agenda of the Council of Europe and many sectors of the Organisation are active in this area: primarily the Group of Experts on Action against Violence against Women and Domestic Violence (GREVIO), but also, for example, the Gender Equality Division, including through its co-operation projects, the Group of Experts on Action against Trafficking in Human Beings (GRETA), the Children’s Rights Committee through the Lanzarote Convention, the Secretariat of the Cybercrime Convention, the media sector and the Parliamentary Assembly.