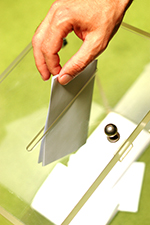 The Division of Electoral Assistance (DG Democracy) provides advice and technical assistance to the member States on various aspects of elections, such as the capacity building of electoral stakeholders and the raising of voter awareness.

In the field of capacity building, the Division of Electoral Assistance works closely with election commissions to ensure that election commissioners are familiar with national regulations of elections and perform their duties in observance of voters rights. The division also works to enhance the capacities of other relevant electoral stakeholders, such as bodies in charge of the oversight of campaign and political party finance (e.g. State Audit Office of Georgia) or media coverage of election campaigns (e.g. Audio-visual Coordinator Council of the Republic of Moldova).

The Division also contributes to raising awareness of the importance of participating in elections as voters and candidates. It assists national election administration in developing voter education and information campaigns, with special focus on women, first-time voters and persons belonging to national minorities (e.g. awareness-raising campaigns for first-time voters in Albania).

The programmes of electoral assistance by the Division of Electoral Assistance are financed through the ordinary budget (programmes for pre-electoral assistance), in the framework of the Programmatic Cooperation Framework for Armenia, Azerbaijan, Georgia, Republic of Moldova, Ukraine and Belarus (“Republic of Moldova: Co-operation on electoral matters” and “Regional: Reforming electoral legislation and practice, and developing regional co-operation in electoral matters”) as well as voluntary contributions from member States.

In addition, the technical assistance work has been carried out with a view to updating the Council of Europe Recommendation Rec(2004)11 of the Committee of Ministers to member States on legal, operational and technical standards for e-voting. The Committee of Ministers deputies adopted at their 1289 Session on 14 June a new Recommendation on Standards for E-Voting. The new Recommendation CM/Rec(2017)5, which follows the previous Rec(2004)11, was developed to ensure that electronic voting complies with principles of democratic elections and is the only existing international standard on e-voting so far.