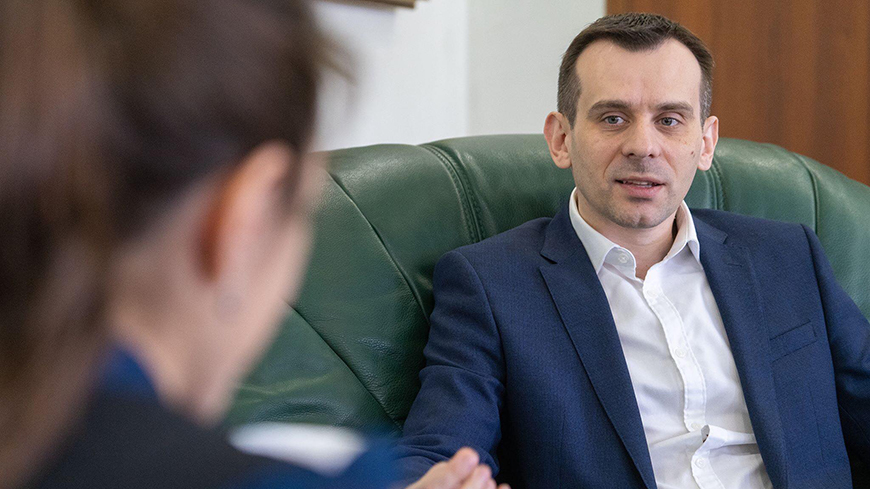 On 12 March 2020, the Government of Ukraine introduced a quarantine in educational institutions to prevent the spread of  COVID-19. At that time, one case of  COVID-19 was confirmed in Ukraine and 48 cases were suspected. On 15 March 2020, parliamentary by-elections were conducted in the Kharkiv region within single mandate electoral district No. 179.

On 17 March 2020, the Cabinet of Ministers of Ukraine closed its borders for entry of foreigners and shut down international passenger air connection with Ukraine. Kyiv, Kharkiv and Dnipro - cities with more than million inhabitants - suspended services of their underground railway systems. Shopping malls, restaurants, cafes and bars were shut down in Kyiv.

The same day, according to the results of the Central Election Commission, Ms Yulia Svitlychna was elected as a member of Parliament in single-mandate electoral district No.179 in the Kharkiv region. A self-nominated candidate received 77.54% of the voters’ votes. On 25 March, 10 days after parliamentary by-elections, the first case of coronavirus was laboratory-confirmed in the Kharkiv region, a situation of emergency was introduced all over Ukraine.

What should we expect next during ongoing quarantine in Ukraine? Will local elections be held on 25 October 2020 with due regard to the provisions of Article 141 of the Constitution of Ukraine laying down that local elections shall be held on the last Sunday of October of the fifth year of the office of the respective local council or mayor elected upon the results of the last regular elections? Oleg Didenko, the Chair of the Central Election Commission of Ukraine, has answered these and other important questions.

1. Did COVID-19 and a national quarantine affect the work of the Central Election Commission? What is the current mode of the CEC operational activities? Do the CEC meetings take place and how often? Does the CEC use any online programmes/platforms for its meetings?

Due to quarantine, the CEC has optimized the way it carries out its activities. We cannot put on hold our work, as preparations to the upcoming 2020 local elections in Ukraine are ongoing. Thus, we try to adjust ourselves to the new reality in order to ensure smooth and effective functioning of the Commission, particularly:

✓ The CEC Secretariat and the Office of the State Registry of Voters have switched to the special mode of work with the view of minimizing, to the extent possible, the number of employees in the workplace. The majority of staff members are on paid annual leave or work remotely.

✓ All the missions are cancelled.

✓ Individual reception of citizens is suspended.

✓ Access to the CEC administrative building and premises is limited.

✓ The CEC meetings and the significant number of working group meetings are held through video conferencing.

✓ The CEC meetings are held whenever it is absolutely necessary. The Law on the Central Election Commission lays down the possibility for the CEC members to participate in its meetings via technical means. Recently, we have adopted the CEC resolution amending the rules of procedure whereas we defined the procedure for organization and conduct of online meetings in case of absolute necessity.

2. Before the introduction of the nationwide quarantine in Ukraine, the by-elections were held in the single-mandate district No. 179 in the Kharkiv region on 15th March. Did the Central Election Commission take any special measures aimed at preventing potential COVID-outbreak in the given electoral district? Did the COVID-factor affect the voters’ turnout on the E-day in this electoral district?

Indeed, the introduction of quarantine measures in Ukraine commenced at the final stages of the electoral process in the electoral district No. 179 in the Kharkiv region, where the parliamentary by-elections were held on 15 March. The CEC did its best to ensure that the elections in the electoral district No. 179 were held smoothly and voters had the opportunity to exercise their right to vote without posing their life and health at risk. The CEC adopted a resolution recommending to local authorities, electoral commissions to organize their work in a way to prevent the spread of coronavirus infection. As a result, many polling stations were overseen by health workers, the precinct election commissions took measures to prevent overcrowding, pens for voting were disinfected every hour, election commissioners used personal pens, regularly wiped their tables, ventilated premises, and measured their body temperature upon their wish.

3. Many countries around the world, where elections should have taken place this year, postponed the elections. Would it be possible to organise and conduct elections during the countrywide quarantine in Ukraine?

Quarantine does not contain any legal obstacles for organising and conducting local elections. The Constitution of Ukraine states that electoral rights of citizens could be limited only during martial law or state of emergency. In fact, if we face a situation when it is impossible to conduct elections in the country, this might be the case to announce a state of emergency.

Citizens' electoral rights are top priority for the Central Election Commission. However, we understand that the fundamental social value for the state is the life and health of its citizens. And if the situation in the country is a threat to the life and health of our citizens, then it should be taken into account, including imposing possible restrictions on the electoral rights of citizens, in accordance with the Constitution.

If the elections are still to be conducted during quarantine, it is necessary to take a set of measures aiming to prevent and diminish the risks of coronavirus infection spreading.

4.  What are the chances that 2020 autumn local elections will be held as scheduled, given the recent decision of the Verkhovna Rada of Ukraine regarding the reallocation of the State Budget funds and a significant reduction of expenses for 2020 local elections? Can local elections be postponed and in which circumstances?

Speaking about whether it would be possible or not to conduct ordinary local elections in autumn this year, especially considering the budgetary cuts for the local elections as recently made by the amendments to the State Budget, there seem to be two possible ways to solve this problem:

✓ Either the Verkhovna Rada of Ukraine will amend the Electoral Code and provide for a reduced list of expenditures to be covered by the State Budget, for example, as the remuneration of election commissioners at all levels, which is allegedly being discussed now,

✓ Or, if this does not happen, there is no other way, but to revise and amend the State Budget of Ukraine again and to find the funds to fully cover the financing of local elections as foreseen by the Electoral Code of Ukraine.

5. What will be the biggest challenges for the CEC and other electoral process participants, if the elections do take place in autumn 2020?

Regarding the main challenges to be faced when the elections are held during quarantine and there is no ground for their cancellation, and the epidemiological situation forces us to take some precautionary measures, first of all, we will need to think how these elections should be organised and conducted while posing minimal threat to the health of both voters who will come to the voting stations and the election commissioners who will organise these elections.

As regards the legal challenges faced by the Central Election Commission and the whole system of election administration, there is a need to improve the Electoral Code. A number of provisions regarding the organisation and preparation to the local elections requires considerable improvement. Also, a new electoral system can be quite difficult to understand and apply, first and foremost, for election commissioners who will directly apply the new legislative provisions. Primarily, it concerns an electoral system with open party lists which is planned to be applied to a number of local elections. But we should also take into account that there will be on average four parallel voting processes at each polling station. This means four voting ballots per a voter might be a considerable burden, particularly, given the reduction of funding for local elections.

Furthermore, Ukraine is now planning to conduct a reform of the administrative and territorial system which may significantly change the rules of the game, rules for the conduct of regular local elections. For example, in case of rayon changes, their enlargement or changes in communities, the provisions of electoral legislation should be adjusted accordingly. Particularly, it will concern logistics, transportation of election documentation, tabulating and establishing the election results. The problem is that this is all happening within a very limited period of time.

in the field of: