How women’s political empowerment can be supported in Armenia? 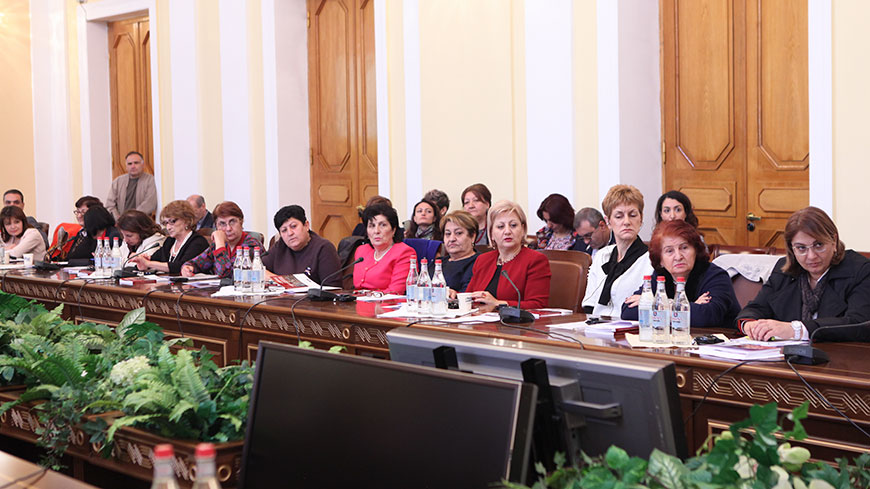 A roundtable titled “Women’s Voice and Leadership in Politics: Armenian Perspective” was organised in the framework of Partnership for Good Governance Programme co-funded by the European Union and Council of Europe, in cooperation with the RA National Assembly and civil society organisations: International Center for Human Development, Armenian Association of Women with University Education and ProMedia-Gender NGOs.

The roundtable held in the National Assembly initiated a dialogue on women’s political engagement among more than 70 representatives of state institutions, political parties, international organisations and civil society. It started with the presentation of the Armenian version of the “Regional study on women’s political representation in Eastern Partnership countries” conducted by the Division of Electoral Assistance in 2015-2016 and continued with a discussion on country specific challenges for Armenia.

Thanks to the introduction of the quota system in the new Electoral Code and increasing the women’s representation in the Parliament to 18%, Armenia has improved the political empowerment subindex of the Global gender gap index by 14 points (ranked 111th out of 144 countries, Global Gender Gap Report 2017). However, this score is far from the goal of 40% in political and public functions, defined in the Recommendation (2003) 3 on balanced participation of women and men in political and public decision making.

Moreover, the experience of 2016 local elections in Armenia shows that the amalgamation of communities had a negative impact on women’s political advancement at the local level, and women’s representation now is two-three times lower in community councils than it was before the enlargement of communities.

The key obstacles to the women’s political participation in Armenia listed by the participants were the lack of confidence, deep-rooted traditional views, lack of public support and political party support, lack of financial means, and lack of capacity building opportunities, especially for young women.

After the presentation of the main areas that affect women’s political representation, namely women’s place in society, political context and legislative framework, different approaches to ensure women’s political advancement were discussed: encouraging and supporting women to enter into politics, raising awareness among the public about the barriers women face in social and political life, improving women’s opportunities within political parties at national and local levels, increasing the quota of women on party lists to 50%, introducing quota system for local government elections in consolidated communities, and creating economic and financial incentives for women.

The recommendation presented in the study for Armenia to consider legislation requiring placing women candidates in every second position on the list and incentivising political parties to increase the number of women candidates was endorsed by the majority of participants. As one of the first steps the establishment of a women’s caucus in the Parliament was mentioned, with a view of taking forward the suggested agenda for women – education for boys as well as girls in equality, policies on violence against women and girls, the Labour Code, equal pay, and close cooperation with civil society.

Almost all of the participants agreed that increasing women’s participation requires a change in mindset, and stereotypes of women’s role in society need to be challenged. Challenges remain, but the roundtable showed that there is an appetite for change.