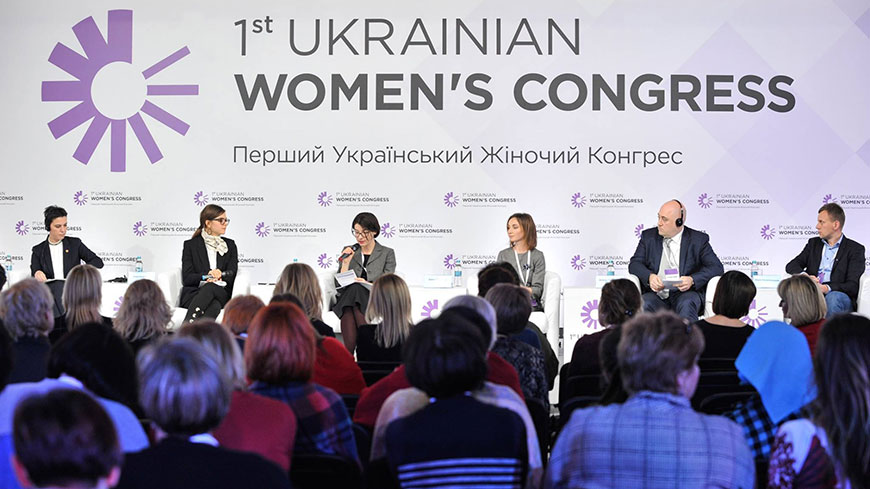 On 22-23 November 2017 the first Ukrainian Women’s Congress brought together more than 300 Ukrainian officials from the executive and legislative branches, women entrepreneurs, gender equality advocates, as well as representatives of civil society organisations and academia, to discuss the challenges to and ways forward in advancing women’s rights in the country.

Initiated by the Ukrainian Parliamentary Women’s Caucus “Equal Opportunities” and funded by the Council of Europe, UN Women, UNFPA, National Democratic Institute and OSCE/ODIHR the Congress was aimed at uniting women around the idea of ensuring “gender equality in various sectors of Ukrainian society, including framing the state policy, bringing them to the process of peacemaking, and struggle against gender-based violence”.

Promoting gender equality in different spheres of Ukrainian political and public life was highlighted as the basic element of sustainable development of Ukraine.

Ukraine features a low level of women's political representation. Thus, in the Women in National Parliaments world classification (1 October 2017) Ukraine ranks 146th among 193 countries, thus being the last among the Eastern Partnership countries. In this regard, insufficient participation of women in politics becomes a serious challenge for democracy, as it prevents more than 50% of Ukrainian citizens from participation in decision-making processes.

This issue was paid special attention in the conclusive concept of the Women’s Congress that called for “triggering multi-level legislative gears in order to ensure equality for men and women through gender quotas”. Among other measures outlined were launching an information campaign to raise public awareness of importance of gender quoting, initiating socio-political dialogue over ratification of the Istanbul Convention, improving the national legislation to prevent, combat and punish gender-based violence, as well as promoting gender-oriented budgeting.

The Congress was followed by a peer-to-peer meeting on “Gender Equality in Politics: Policy Making and Implementation” on 24 November, with the participation of a select group of European MPs and experts and their Ukrainian peers. The peer meeting was organised by the Council of Europe in co-operation with the Parliamentary sub-committee on gender equality and non-discrimination issues.

The exchange of ideas contributed to presentation of successful practices from European countries. Among the examples on how to reach a gender-sensitive parliament the Action plan for gender-sensitive parliament of Montenegro and report “The Good Parliament” by Sarah Childs were presented. Austrian and Croatian action plans and tools were mentioned during the discussion on gender equality within political parties. The Equality Act 2010 that forms the basis of anti-discrimination law in Great Britain was highlighted as one of the best practices for promoting gender mainstreaming in legislation. The importance of incentives to political parties with women's agenda was also brought to the table.

As regards to the role of civil society in promoting women’s agenda the positive examples of the civil society involvement in law-making processes in Croatia, Iceland, and the United Kingdom were presented. Among such examples are the Women Parliament in Montenegro that is organised once per year by the Gender Equality Parliamentary Committee, as well as 1975 Icelandic women's strike, during which 90% of Iceland’s female population, led by women’s organisations, did not go to their paid jobs and did not do any housework or child-rearing for the whole day.

Based on the exchange of challenges, lessons learned and best practices the Sub-committee will decide which suggestions can be acted upon, and which examples could be adapted to the Ukrainian context.