First-time voters enhanced their knowledge of electoral and voting procedures, political party systems and media coverage of elections on the eve of 2019 Presidential Elections in Ukraine 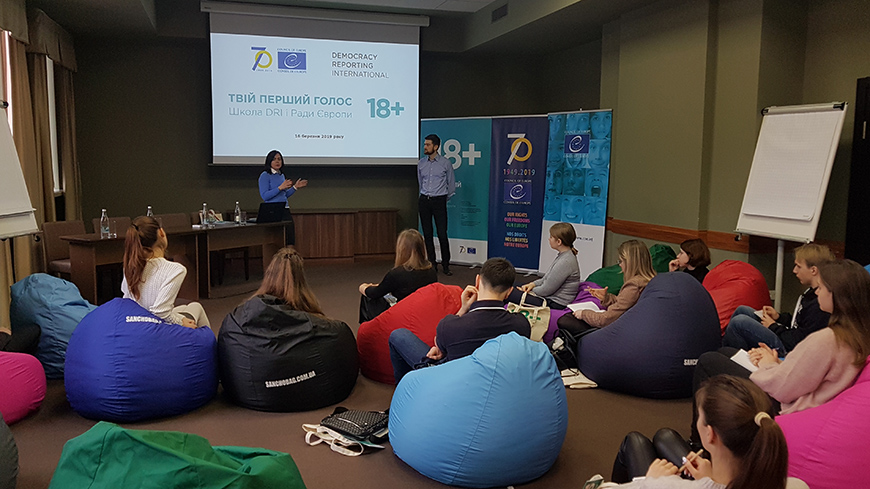 Throughout March – April 2019, 128 first-time voters from Kyiv, Severodonetsk, Starobilsk, Zaporizhzhia and Lviv regions took part in joint Council of Europe and Democracy Reporting International workshops “Your first vote” aimed at engaging youth in political and electoral processes in Ukraine. During these workshops, participants got acquainted with peculiarities of different electoral and party systems, specifically those functioning in Ukraine, enhanced their knowledge of Ukrainian electoral legislation and practice, learned about the most widespread electoral violations and existing accountability mechanisms, and discovered how to act in case they witness an electoral violation at a polling station.

During these workshops, young voters learnt how to make conscious and informed choice and to protect themselves via critical thinking from manipulative technologies and influence which might be used by some media and/or politicians throughout pre-election campaign period. Participants of the workshops analysed media coverage of elections in Ukrainian media space against existing journalistic standards and Ukrainian electoral legislation, explored the phenomenon of advertorials (hidden paid political advertising) and black PR, and learned how to detect them in media. Separate focus was made on the role of social media in pre-election campaigns: such topics as prepaid political advertisements, invasion of bots promoting political candidates and media hygiene were of high interest for the audience and stimulated the exchange of ideas and observations.

The participants were highly motivated and actively participated in discussions and practical tasks proposed by the speakers. They highlighted the importance of such events for those who are to make their first vote and expressed their will to continue their political education in further similar activities.